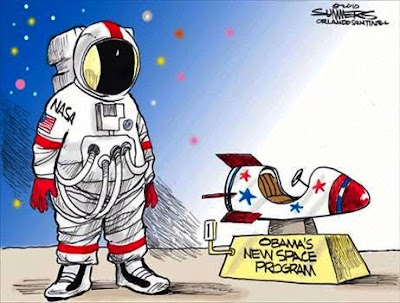 I think something is missing here: Science can progress by leaps and bounds without man pushing the button in space. I think he is being realistic and farsighted in down sizing NASA.

The American Spectator
Any long-term future for the U.S. in space has suddenly become a great deal less assured, despite the fact space flight has been paying massive dividends for decades. President Obama, to the joy of some rivals and enemies of the U.S. Space program, has produced a future of fudge for it, which upon examination looks as if it is no future at all. Apparently, according to the president, the U.S. is not going back to the moon because it's already been there, but it's going somewhere else. Where exactly is a moot point:

Obama has been reported as saying:

Now, I understand that some believe that we should attempt a return to the surface of the Moon first, as previously planned, but I just have to say pretty bluntly here: We've been there before. Fifty years after the creation of NASA, our goal is no longer just a destination to reach. Our goal is the capacity for people to work and learn and operate and live safely beyond the Earth for extended periods of time, ultimately in ways that are more sustainable and even indefinite.
Like so many of Obama's speeches, it sounds good at first, with something in it for everyone. Except that at a second look, there doesn't seem to be anything in it for anyone, least of all the space-program. It sounds less like a program for exploring space than for putting off space exploration as jam tomorrow and, literally, pie in the sky. It also seems to fit uncomfortably well with to use old-fashioned language, a turning away from the concept to manifest destiny, which surfaces in Obama's thoughts and actions at times.

Neil Armstrong and fellow Apollo 11 program commanders James Lovell and Eugene Cernan have released a letter saying that while some of Mr. Obama's NASA budget proposals have merit, the decision to cancel the Constellation program, the Ares 1 and Ares V rockets and the Orion spacecraft is devastating.

American astronauts could now only reach low earth orbit and the International Space Station by hitching a ride on the Russian Soyuz spacecraft at a price of more than $50 million per seat, the letter said.

For the United States, the leading space-faring nation for nearly half a century, to be without carriage to low earth orbit and with no human exploration capability to go beyond earth orbit for an indeterminate time into the future, destines our nation to become one of second- or even third-rate stature.…

Without the skill and experience that actual spacecraft operation provides, the USA is far too likely to be on a long downhill slide to mediocrity.
Britain provides a historic example. Socialist Prime Minister Harold Wilson (who once promised: "We are restating our socialism in terms of the scientific revolution ... the Britain that is going to be forged in the white heat of this revolution will be no place for ... outdated methods.") and left-wing Conservative Prime Minister Edward Heath between them killed off a successful and inexpensive British space program in the 1970s with its own rockets and satellites (and which, if proceeded with, would have been a financial Golconda). There was never the money or, more importantly, the will and inspiration, to start it again. It drifted off into the realms of "one day…", becoming ever more remote. A tiny British space agency has only just been restarted and its future seems vague and uncertain (this in a country which each year spends enough on gambling to finance the U.S. Space program).

Establishing a proper base on the moon would be a huge and challenging undertaking. Establishing a base somewhere else -- Mars or the asteroids -- would be many times more difficult, expensive, and dangerous. This is not to say it couldn't, or shouldn't, be done eventually -- it certainly should and inevitably someone is going to do it eventually -- but to bypass the moon, a case of running before one can walk, is simply bizarre. If the U.S.'s goal really is "for people to work and learn and operate and live safely beyond the Earth for extended periods of time," the moon is the obvious place to learn how to do it.

Obama's reported reason for abandoning the moon project -- "We've been there before" -- if taken seriously, and U.S. presidential policy pronouncements are meant to be taken seriously -- is simply horrifying in its myopia, ignorance and philistinism. It is as if 16th-century Spain refused any further funding for exploring the Americas on the grounds that Columbus had already reached it ("But one day we'll go to the North Pole").

Twelve men have landed on the moon and stayed for a few hours, the last more than 40 years ago. They brought back some rock samples. This was important but in terms of advancing science did not even scratch the surface of what could be done.

The Chinese, it seems, appreciate the potential scientific and possibly military value of the moon. They have launched four manned rockets, the last carrying two men, and it is reasonable to guess that they are aiming at a permanent moon-base. India, Europe, and of course Russia are all pushing into space, while the U.S. throws away its lead.

In fact, the moon is a ready-made space station. Its low gravity means large spacecraft can be assembled there relatively easily for longer voyages. As a major bonus large quantities of water have recently been found there -- a heavy and incompressible substance difficult to transport into space: you can't save weight or space in a space-ship's stores by carrying compressed or dehydrated water. The mere fact of working in vacuum might well establish a whole set of new industries and technologies. It is simply impossible to know what benefits and innovations a moon-base would bring, but it is safe to say that, like the space program itself, they would be substantial.

Further, while an operating moon-base might be a practical demonstration of the value of space flight, as artificial satellites have been, with all sorts of unforeseen benefits, it is hard to imagine the money ever being available for a one-off shot straight to Mars. What it looks like is administering euthanasia to the space program while disguising the fact in pseudo-stirring language of exploration, adventure, and discovery. It is also hard to imagine "astronaut" being first choice for a career-option among the best and brightest when the possibility of getting into space, let alone of setting foot on another world, is suddenly decades away, if it still exists at all.

Jerry de Groot, a British professor of history with an extreme dislike of space flight, has, in a series of anti-space diatribes, likened space flight to "carrion" and a sign of America's "spiritual vacuity." One thing he has written, however, is all too plausible. He claims:

The president, however, hasn't the guts to pull the plug on the manned program. Therefore, he has decided to fudge. Nasa will be given an additional $6 billion over the next five years to develop the technologies to take human beings to the Moon and beyond. Since a mission to Mars is conservatively costed at $500 billion, the money will pay for a few blueprints.

Obama's new version of the fudge can be easily explained. While most Americans have grown contemptuous of funding space spectaculars [Oh, really?], the voters of Florida remain enthusiastic, for obvious reasons. Those who work in the space industry might talk passionately of man's need to explore, but what they really want is a wage packet. And, as recent elections have clearly demonstrated, no president can afford to annoy the Floridians. I suspect the fudge will continue long after Obama retires. Landing on Mars will always be an event scheduled to occur 20 years from tomorrow.
[Hal G.P. Colebatch, a lawyer and author, has lectured in International Law and International Relations at Notre Dame University and Edith Cowan University in Western Australia and worked on the staff of two Australian Federal Ministers.]

Thanks to POSP stringer Tim.
Posted by Mercury at 4:05 PM