Not movie star autographs but just as valuable 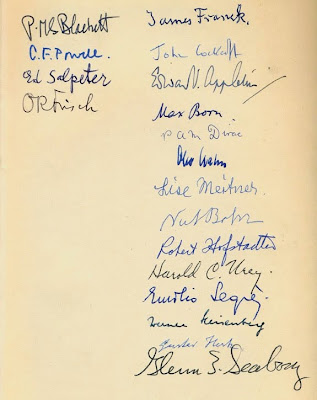 Symmetry
Toward the end of June 1962, a virtual pantheon of modern physics descended on a tiny island just off the shores of Lake Constance, in Germany’s rolling Bavarian countryside. They’d come from around the globe for the 12th annual Nobel Laureates Meeting at Lindau. Laureates and select students gathered for a collegial week of lectures, informal meetings, and socializing.

Friedrich Katscher, a Viennese physicist and journalist, covered the conference for Austrian newspapers and radio. He says it was a giddy experience for a science lover: “These were the really great people of the world, and many of them were meeting each other for the first time.”

Halfway through the week, the students rallied for a torch-lit procession through the town as a show of appreciation for the great scientists’ leadership and dedication to teaching. (Paul Dirac, overcome, joined right in.) Then physicists and students together sang “Gaudeamus,” the academic hymn: “Let us rejoice therefore, while we are young. After a pleasant youth, after a troubling old age, the earth will have us.”

Katscher seized the opportunity to get an autograph from almost every scientist present. The list could transform even the most stoic physics buff into swooning groupie: Niels Bohr, James Franck, Lise Meitner, Werner Heisenberg, Max Born, Gustav Hertz, among many others. Katscher says they readily signed for him, and were supremely gracious to press and students alike.

Just months later, Niels Bohr was dead. None of those whose names are scrawled on the yellowing page are still alive. The last to survive, Edwin Salpeter, died in 2008. Katscher says he feels lucky to have been there: “It was one of the last possibilities to see these people together.”

Glenn Theodore Seaborg [Wikipedia]
Posted by Mercury at 10:11 AM