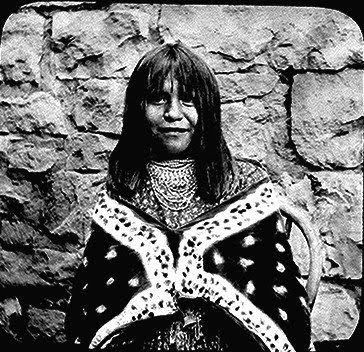 "Indian Tribe Wins Fight to Limit Research of Its DNA"

The New York Times
Seven years ago, the Havasupai Indians, who live amid the turquoise waterfalls and red cliffs miles deep in the Grand Canyon, issued a “banishment order” to keep Arizona State University employees from setting foot on their reservation — an ancient punishment for what they regarded as a genetic-era betrayal.

Members of the tiny, isolated tribe had given DNA samples to university researchers starting in 1990, in the hope that they might provide genetic clues to the tribe’s devastating rate of diabetes. But they learned that their blood samples had been used to study many other things, including mental illness and theories of the tribe’s geographical origins that contradict their traditional stories.

The geneticist responsible for the research has said that she had obtained permission for wider-ranging genetic studies.

Acknowledging a desire to “remedy the wrong that was done,” the university’s Board of Regents on Tuesday agreed to pay $700,000 to 41 of the tribe’s members, return the blood samples and provide other forms of assistance to the impoverished Havasupai — a settlement that legal experts said was significant because it implied that the rights of research subjects can be violated when they are not fully informed about how their DNA might be used.

The case raised the question of whether scientists had taken advantage of a vulnerable population, and it created an image problem for a university eager to cast itself as a center for American Indian studies.

But genetics experts and civil rights advocates say it may also fuel a growing debate over researchers’ responsibility to communicate the range of personal information that can be gleaned from DNA at a time when it is being collected on an ever-greater scale for research and routine medical care.

“I’m not against scientific research,” said Carletta Tilousi, 39, a member of the Havasupai tribal council. “I just want it to be done right. They used our blood for all these studies, people got degrees and grants, and they never asked our permission.”

Researchers and institutions that receive federal funds are required to receive “informed consent” from subjects, ensuring that they understand the risks and benefits before they participate. But such protections were designed primarily for research that carried physical risks, like experimental drug trials or surgery. When it comes to mining DNA, the rules — and the risks — are murkier.

Is it necessary, for instance, to ask someone who has donated DNA for research on heart disease if that DNA can be used for Alzheimer’s or addiction research?

Many scientists say no, arguing that the potential benefit from unencumbered biomedical research trumps the value of individual control.

“Everyone wants to be open and transparent,” said Dr. David Karp, an associate professor of internal medicine at the University of Texas Southwestern Medical Center in Dallas, who has studied informed consent for DNA research. “The question is, how far do you have to go? Do you have to create some massive database of people’s wishes for their DNA specimens?”

The Havasupai settlement appears to be the first payment to individuals who said their DNA was misused, several legal experts said, and came after the university spent $1.7 million fighting lawsuits by tribe members.

Even as the Havasupai prepared to reclaim the 151 remaining blood samples from a university freezer this week, Therese Markow, the geneticist, defended her actions as ethical. Those judging her otherwise, she suggested, failed to understand the fundamental nature of genetic research, where progress often occurs from studies that do not appear to bear directly on a particular disease.

“I was doing good science,” Dr. Markow, now a professor at the University of California, San Diego, said in a telephone interview.

Edmond Tilousi, 56, a cousin of Carletta Tilousi and the tribe’s vice chairman, can climb the eight miles from his village on the floor of the western Grand Canyon to the rim in three hours, when he is in a rush. Horse or helicopter are the other ways out, and Mr. Tilousi is increasingly rare among the tribe’s members in his ability to make the hike. Beginning in the 1960s, an extraordinarily high incidence of Type 2 diabetes led to amputations, even among the younger members, and forced many to leave the canyon for dialysis.

In late 1989, Mr. Tilousi’s uncle Rex Tilousi approached John Martin, an Arizona State University anthropologist who had gained the tribe’s trust, to ask if he knew a doctor who could help. “I asked him, ‘How can we prevent this from spreading?’ ” the elder Mr. Tilousi recalled.

Professor Martin approached Dr. Markow. A link had recently been reported between a genetic variant and the high rate of diabetes among Pima Indians. If a similar link was found among the Havasupai, it might point to an important risk factor.

The two professors received money from the university to study diabetes in the tribe. Dr. Markow was interested in schizophrenia research as well, and in the summer of 1990, with a grant from the National Alliance for Research on Schizophrenia and Depression, she and her graduate students began collecting blood samples in Supai. Women here remember being happy to see her in those days, an athletic figure who talked to them about how to be more healthy. Working out of the health clinic in the center of the village, Dr. Markow recruited tribe members to ask others to give blood. To the Havasuapi, blood has deep spiritual meaning.

“I went and told people, if they have their blood taken, it would help them,” said Floranda Uqualla, 46, whose parents and grandparents suffered from diabetes. “And we might get a cure so that our people won’t have to leave our canyon.” Roughly 100 tribe members who gave blood from 1990 to 1994 signed a broad consent that said the research was to “study the causes of behavioral/medical disorders.”

The consent form was purposely simple, Dr. Markow said, given that English was a second language for many Havasupai, and few of the tribe’s 650 members had graduated from high school. They were always given the opportunity to ask questions, she said, and students were also instructed to explain the project and get written and verbal consent from donors.

Dr. Markow examined several genes that were thought to have medical relevance, including for schizophrenia, metabolic disorders and alcoholism, she said, but found little to pursue. The Havasupai did not, it turned out, share the gene variant linked to diabetes in the Pima.

But a few years later, a graduate student using new technology came up with a way to discern variations in the Havasupai DNA, which was stored in a university freezer, and he wrote a dissertation based on his research.

Carletta Tilousi, one of the few Havasupai to attend college, stopped by Professor Martin’s office one day in 2003, and he invited her to the student’s doctoral presentation.

Ms. Tilousi understood little of the technical aspect, but what she heard bore no resemblance to the diabetes research she had pictured when she had given her own blood sample years earlier.

“Did you have permission,” she asked during the question period, “to use Havasupai blood for your research?”

The presentation was halted. Dr. Markow and the other members of the doctoral committee asked the student to redact that chapter from his dissertation.

But months later, tribe members learned more about the research when a university investigation discovered two dozen published articles based on the blood samples that Dr. Markow had collected. One reported a high degree of inbreeding, a measure that can correspond with a higher susceptibility to disease.

Ms. Tilousi found that offensive. “We say if you do that, a close relative of yours will die,” she said.

Another article, suggesting that the tribe’s ancestors had crossed the frozen Bering Sea to arrive in North America, flew in the face of the tribe’s traditional stories that it had originated in the canyon and was assigned to be its guardian.

Listening to the investigators, Ms. Tilousi felt a surge of anger, she recalled. But in Supai, the initial reaction was more of hurt. Though some Havasupai knew already that their ancestors most likely came from Asia, “when people tell us, ‘No, this is not where you are from,’ and your own blood says so — it is confusing to us,” Rex Tilousi said. “It hurts the elders who have been telling these stories to our grandchildren.”

Others questioned whether they could have unwittingly contributed to research that could threaten the tribe’s rights to its land. “Our coming from the canyon, that is the basis of our sovereign rights,” said Edmond Tilousi, the tribe’s vice chairman.

Many members are still suffering from diabetes and say they were never told if researchers had learned anything that could help them. The classes on nutrition that Dr. Markow had sponsored with grant money have since petered out.

Ms. Uqualla, who had recruited blood donors, said she felt shamed by the news that it had been used for research that could potentially damage the tribe. “I let my people down,” she said.

The money from the settlement will be divided among the 41 tribe members. Ms. Uqualla, for one, hopes to buy a horse trailer.

But Stephen F. Hanlon, a lawyer who has represented the tribe members without charge, said the resources the university agreed to provide, including scholarships and assistance in obtaining federal funds for projects like a new health clinic, had the potential to transform the tribal village at the bottom of one of the world’s most famous natural wonders.

On Tuesday, Ms. Tilousi cried as a university official unlocked the freezer in the nondescript storage room in the Tempe campus where the blood samples had long been stored. Wearing protective glasses, gloves and a lab coat, she and a delegation of tribal members sang in Havasupai as they saw the blood that had been taken from them and from their relatives, now dead.

On the box inside the freezer was scrawled the name, “Markow.”
Posted by Mercury at 2:50 PM

I lived with these people – The Havasupai, in their village for over 2 years assisting them to recover from a horrible financial meltdown.

As a past CPA sharing financial and best business practices with them ... they were silently teaching me the meaning of life. I cannot begin to tell you how many times the energy in that little village – during these toilet water snow days …. woke me up a 2:00 in the morning. I would go outside ... see the moon light dance over the silent and magnificent cliffs ... and cry. Oh what have we done?

It is unbelievable what that University filled attorneys could have done wiht a little humility vs. what they really did for pride and dollars.

Some humans still pray to their soul’s keeper … while others to the Dollar.

Many universities have little conscience...they confiscate goods and property and it isn't always directed towards Native Americans. In my city a large university has attempted to grab, through various nefarious means, adjacent residential property in order to expand their territory and in one case erect a soccer stadium. Thankfully, the neighborhood citizens thwarted their crusade.