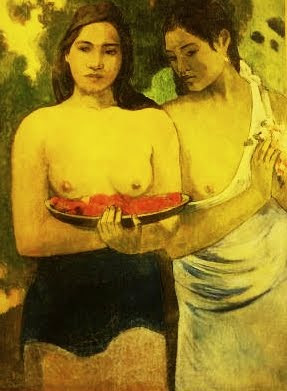 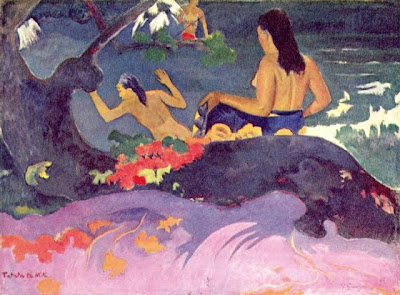 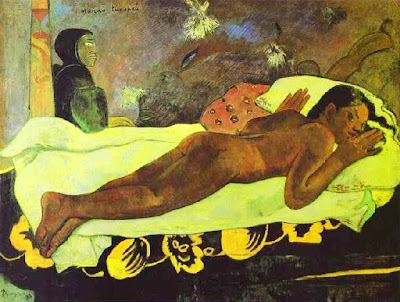 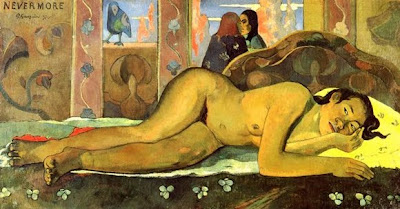 Is this an extreme case of twisting the truth to present an unreal situation? And for what purpose?

guardian.co.uk
He was a fabulist and shameless manipulator of the truth as well as a canny self-publicist, the sort of self-conscious user of shock tactics we might associate with a modern generation of artists.

That is the Paul Gauguin who will be revealed to visitors to Tate Modern this autumn, as the museum mounts the first major exhibition devoted to him in the UK for 50 years. A third of the more than 100 works in the show will be seen in London for the first time when the exhibition opens in September.

His most famous works are, of course, his sensual, prelapsarian visions of Tahiti. The curators will show how his Tahiti paintings weave their own kind of mythology, sometimes rather sensationally referring to "primitive" Oceanian manners and morals that were, by the 1890s, distant memories or indeed simply fantasy.

For instance, his beautiful semi-naked young women proffering platters of fruit were, argue the curators, largely a product of Gauguin's imagination. By the 1890s, Tahiti, a French colony, had been comprehensively worked over by missionaries.

"They were wearing smocks and going to church on Sundays," says Belinda Thomson, curator of the exhibition. She called his relationships with his Tahitian models-mistresses "fairly exploitative". They were not, she says "equal relationships, nor could you call them properly professional relationships".

In Parahi te Marae (1892), a landscape in which a glowering idol looms over a yellow field circled with elaborate fencing (its form gleaned not from observation on the ground, but rather from looking at objects in Parisian museums), Gauguin hints at cannibalistic ritual ‑ a feature of Tahiti's very distant past. "He is reinventing the scene, playing on his audience's prejudices," says Thomson.

In his book about Tahiti, Noa Noa, Gauguin claimed to have been told ancient myths and legends about the island's past by his Tahitian lover, Teha'amana. In fact he read them in the 1837 book Voyages aux Iles du Grand Océan, by JA Moerenhout.

In his fascination with the "primitive" Gauguin was nothing out of the ordinary in 19th-century Europe. But in his employment of shock tactics ‑ his deliberate sensationalising of Tahitian life ‑ says Thomson, "he was ahead of the game".

If the Tahitian pictures are among his most recognisable works, the exhibition, Gauguin: Maker of Myth, will also examine his output beyond this colourful period in his artistic life.

Four paintings made in the late 1880s in Brittany will be brought together for the first time. These works ‑ Yellow Christ, Green Christ, Self-portrait as Christ in the Garden of Olives and Vision of the Sermon ‑ see the painter, in an earlier period, already in the business of drawing on myth, fable and a large dose of his own prejudices about the Breton people to create works with an intriguing narrative content.

In his La Perte de Pucelage ‑ or "loss of virginity" ‑ he layered motifs, allusions and symbols to hint at a kind of narrative. A woman lies in the foreground, naked, with a fox. In the background is seen a Breton wedding procession. "On the one hand it is a kind of Breton version of Manet's famous painting Olympia," says Thomson. "On the other there is a layering of symbolism and elements of Breton folklore, with the fox as the malign seducer."

According to Thomson, "he played up certain aspects of Breton life: a superstitious intensity of faith, for instance". Co-curator Christine Riding says: "He paints them in a decorative and childlike way. You certainly don't get a sense of the harshness of Breton life." Yellow Christ, for instance, shows Jesus crucified in a Brittany landscape; beneath the cross kneel three praying women dressed in traditional Breton headdresses.

Gauguin was also an adept self-mythologiser: the Self-portrait as Christ in the Garden of Olives sees him paint himself as if Jesus before the crucifixion: isolated, betrayed. According to Thomson, "it is the ultimate bombastic or overblown statement of the artist as creator". Riding says: "He was an arch-manipulator of his own artistic identity and wove elaborate myths around himself."

Gauguin had been a stockbroker and what Riding called "a Sunday painter" before taking up art full-time after an economic downturn in the early 1880s, as a result of the collapse of a French bank. He was largely self-taught, using the art he had collected when a stockbroker, including Pissarros and Cézannes, as a study aid.

Paul Gauguin [Wikipedia]
Posted by Mercury at 6:20 AM