College of Staten Island and bucks for names 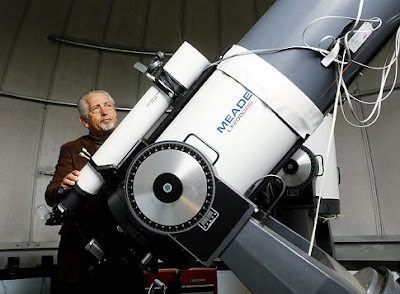 Okay, a worthy idea, but is it official?

NYDailyNews
Astronomy Prof. Irving Robbins is offering the astronomical bargain of the decade.

A sizable donation to the College of Staten Island's astronomy program could earn you the right to name not only the school's tiny observatory but also - not one but two - planetoids Robbins was recently credited with discovering.

"Could" is the operative word since Robbins is also considering naming the planetoids - 2009 VH24 and 2009 XNO7 - after his sons, Isen, Davy or Zeav, his girlfriend, Dana, or his ex-wife of 37 years, Freda.

"I found these things, so I get to name them," Robbins said. "Somebody wants to give some money toward a new observatory, we can talk."

Robbins, 69, has taught at CSI for 42 years and started the astrophysics program there.

It's a popular course, attracting about 800 students in the academic year despite the fact Robbins "toughened it up a bit lately by including more math."

As director of the college's Astrophysical Observatory, Robbins, his assistants and students have tracked not only the planetoids he will name but also many Potentially Hazardous Asteroids (PHA) and Near Earth Objects (NEO) whose orbits may eventually cross the Earth's celestial path.

Robbins said the hunt is personal.

"I really believe that there is a good possibility that we're going to get hit" by an errant asteroid, Robbins said. "If an object comes near the Earth, the question is always if it will hit us."

In 1988, Robbins noted, when the Harvard University-based Minor Planet Center first began tracking threatening celestial objects, there were 25 known objects that came close to the Earth.

"Now there are over 2,000," he said. "Some of them get very close and are potentially hazardous. This is an important problem."

Using advanced software and digital cameras, Robbins positions the telescopes on the part of space he is interested in and then snaps a series of pictures over a set interval.

"Say we get three pictures," he said. "Then we get the computer to put the pictures together and flash them, or make them blink.

"Stars don't move. Stars move because the Earth turns, but we're moving with the stars. But the asteroid is moving amongst the stars.

"So when we flash the images, or blink them, we see the asteroid [a tiny white dot among hundreds of white dots] jumping along."


Ethical advertising--name a star
Posted by Mercury at 7:20 AM

it was the gift that mattered...not the fact...besides should it do something spectacular..such as the source of alien music...their will be no such recognition it was my star...nope...just a number...as i said..it was the thought that counts...and even if i had the money...my name would be no where