Real books vs E-books and personality 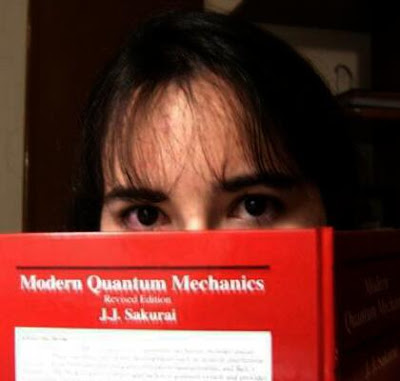 With E-books our persona will be concealed. Not good. How are we going to impress others. Don't you want the one sitting next to you on the trolley know that you are read a technical text on quantum physics?

"In E-Book Era, You Can’t Even Judge a Cover"

The New York Times
Bindu Wiles was on a Q train in Brooklyn this month when she spotted a woman reading a book whose cover had an arresting black silhouette of a girl’s head set against a bright orange background.

Ms. Wiles noticed that the woman looked about her age, 45, and was carrying a yoga mat, so she figured that they were like-minded and leaned in to catch the title: “Little Bee,” a novel by Chris Cleave. Ms. Wiles, a graduate student in nonfiction writing at Sarah Lawrence College, tapped a note into her iPhone and bought the book later that week.

Such encounters are becoming increasingly difficult. With a growing number of people turning to Kindles and other electronic readers, and with the Apple iPad arriving on Saturday, it is not always possible to see what others are reading or to project your own literary tastes.

You can’t tell a book by its cover if it doesn’t have one.

“There’s something about having a beautiful book that looks intellectually weighty and yummy,” said Ms. Wiles, who recalled that when she was rereading “Anna Karenina” recently, she liked that people could see the cover on the subway. “You feel kind of proud to be reading it.” With a Kindle or Nook, she said, “people would never know.”

Among other changes heralded by the e-book era, digital editions are bumping book covers off the subway, the coffee table and the beach. That is a loss for publishers and authors, who enjoy some free advertising for their books in printed form: if you notice the jackets on the books people are reading on a plane or in the park, you might decide to check out “The Girl With the Dragon Tattoo” or “The Help,” too.

“So often when you’re thinking of a book, you remember its cover,” said Jeffrey C. Alexander, professor of cultural sociology at Yale. “It’s a way of drawing people through the visual into reading.”

In the bookstore, where a majority of sales still take place, covers play a crucial role. “If you have already passed that hurdle of having a customer be attracted to the cover, and then they pick up the book,” said Patricia Bostelman, vice president for marketing at Barnes & Noble, “an enormous battle has been won.”

But it’s a victory that will be harder to eke out if no one can tell whether you’re reading “War and Peace” or “Diamonds and Desire.”

Perhaps no other element of the book-making process receives as much input from as many different people as the jacket. First, a creative director comes up with an idea. (How about this image of an apple?) Then the book’s editor, author and agent have a look. (Can we enlarge the font size on the author’s name? And wasn’t an apple used for that book about vampires? This book isn’t about vampires.) The publisher of the imprint gets involved. (Vampires sell. I like the apple.) The sales force makes comments. (Isn’t there an economics angle? How about an apple with an orange inside? That’s worked before.) Even booksellers have an opinion. (What I really love on a cover is a pair of high heels.)

A good jacket is unlikely to save a bad book, of course. But in a crowded market, a striking cover is one advantage all authors and publishers want. To get a sense of the odds, in a random analysis of 1,000 business books released last year, Codex Group, a publishing consultant, found that only 62 sold more than 5,000 copies.

Even in the digital era, publishers believe that books need graphic representations — if only for the online marketing campaign. Regardless of the format, “they all seem to need what we know of as a cover to identify them,” said Chip Kidd, associate art director at Alfred A. Knopf. Mr. Kidd has designed more than 1,000 jackets for authors including Cormac McCarthy and James Ellroy.

The music industry went through a similar transition when digital music devices arrived, but it has pushed back by finding fresh ways to display CD cover art on the Web sites where the songs are bought and the iPod screens where they are played. Publishers have already had some experience tailoring book jackets for the digital world, since so many people now buy even their print copies online.

“We often get requests to make the type bigger,” said Mario J. Pulice, creative director for the adult trade division of Little, Brown & Company. “Because when it’s on Amazon, you can’t read the author’s name.”

As publishers explore targeted advertising on Google and other search engines or social networking sites, they figure that a digital cover remains the best way to represent a book.

Some readers expect makers of electronic devices to add functions that allow users to broadcast what they’re reading. “People like to show off what they’re doing and what they like,” said Maud Newton, a popular book blogger. “So eventually there will be a way for people to do that with e-readers.”

Even avid online networkers rely on physical book covers in the real world. Heather E. Johnson, 32, who writes reviews on her blog, “Age 30+...A Lifetime of Books,” was recently at one of her son’s hockey games in Glen Burnie, a suburb of Baltimore, when she noticed a copy of Diana Gabaldon’s “Outlander” lying open on the bleachers.

When a friend returned to claim it, Ms. Johnson asked for an opinion. “She said it was fabulous,” Ms. Johnson recalled. As soon as Ms. Johnson got home, she moved the title up her “to be read” list.

“I don’t know that I would start a conversation with someone about something they were reading on an e-reader,” Ms. Johnson added. “It might not be something that they want anyone to know that they’re reading.”

Some digital publishers suspect that one of the reasons romance and erotica titles are so popular in electronic editions is because e-readers are discreet.

Holly Schmidt, president of Ravenous Romance, an e-book publisher of romance and erotica, said that in one case the publisher was offering an anthology of stories about older women and younger men. The first version featured a digital cover image of a winsome woman. It barely sold any copies. The publisher put a new cover up online — this time showing the bare, muscular torsos of three young men — and sales took off.

The new cover “took a book that was pretty much a loser,” Ms. Schmidt said, “and made it into a pretty strong seller.”

Electronic books vs "real" books
Posted by Mercury at 3:16 PM

as someone who frequents mass transit....i never notice what anyone is reading....