Brian May and the Welsh badgers 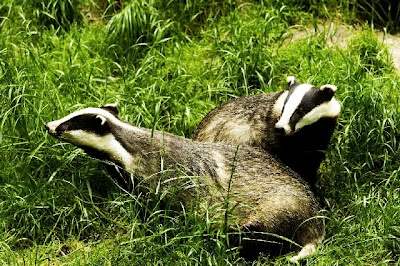 So some in Wales think so.
You know Brian May...lead guitarist of the rock band Queen and earning a Ph. D. in astrophysics. Now he is interested in an issue involving badgers in Wales.

"My battle for Welsh badgers"

guardian.co.uk
It was a 4.30am wake-up call. Three hours in the car did it – I had the luxury of being driven, so I was able to do a couple of phone interviews in the car on the way, publicising the fact that I cared enough about Welsh badgers to travel to Wales to sit in on a judicial review. The review is a courageous action brought by the Badger Trust, challenging the legality of the Welsh assembly's decision to slaughter thousands of badgers – an attempt to control bovine tuberculosis in Welsh cattle.

I knew I would not be able to speak at the hearing, but figured I could attract some attention for the cause, and perhaps rally some support for the threatened badgers. I have every sympathy for the plight of farmers faced with losing their whole herds because of a suspected bovine TB case. But the only scientific study so far performed on this issue came to the clear conclusion that "badger culling cannot meaningfully contribute to the control of cattle TB in Britain". If a farmer is forced to destroy his livestock, he is heavily compensated by the government – but this is expensive. And farmers have somehow got the idea that killing the badgers constitutes a quick fix. Unfortunately, this is not the case.

The ISG (Independent Scientific Group) report, costing millions of pounds and the lives of 11,000 badgers over a period of 10 years, concluded that culling badgers actually increased the incidence of bovine TB in some cases. Quick fix? It's not going to happen. The same question came up in England a few years ago and the Countryside Alliance brought extreme pressure on the government to embark on a programme of badger-killing. Luckily there is a God. Hilary Benn bravely resisted all pressure and embarked on a course of vaccination – a five-year plan that has a good chance of succeeding in eradicating this scourge, without murdering a single badger.

So we arrived at the little courthouse in Swansea. What was at stake? Badgers, yes, but much more; the whole question of how we treat the other animals on our planet. In farming, animals are routinely treated as nothing more than commodities: millions of them are confined in hideous containers, deprived of light or movement, never to see the light of day, force-fed, chained up, and then often killed in a degrading and painful way. Wild animals fare just a shade better, but in areas where hunts flourish – despite the hunting ban – packs of brutalised hounds are let loose on foxes, who have often been kept in bags. In laboratories in the UK mice, rats, cats, dogs and even monkeys are routinely subjected to appalling pain and indignity in the name of scientific knowledge, medicine and developing cosmetics. The more I learn of how we behave, the less I can sleep at night.

So here I am, metaphorically trying to throw a lone starfish back into the sea.

The courtroom is filled with about 10 legal ladies and gentlemen, a judge and about 30 onlookers. This particular judge is a benign figure – a soft-spoken man, a model of patience, diligence, and understanding – the kind of figure you pray will be presiding when you meet St Peter.

The Badger Trust's advocate is on his feet. It is his job to define why the decision to cull badgers in Wales is illegal. It is a tough call. The exposition is long and painstaking in detail – I think most of us in the audience alternate between rapt attention and drifting off. We hear that a viable injectable vaccine for badgers will be available from May of this year, and an oral vaccine – a much easier proposition to administer – in 2014. We hear that in both vaccination and culling the animals have to be trapped, and an injection given. We hear of a paper by Jenkins et al, published in 2008, a follow-up to the ISG study, which revealed that even the tiny benefits the experimental cull produced faded away after the experiment was finished – and this paper, we are told, was ignored by the Welsh assembly in making their decision in 2009 for the slaughter to begin. "Perturbation" of the badgers' lifestyle is the reason that bovine TB can increase in the periphery of a culled area. Perturbation ceases at the end of the trial, so the incidence of the pestilence dies down once more.

I now realise that in this "trial" moral arguments are not admissible. The only mention of morality comes in when a directive from Europe that animals should not be submitted to unnecessary pain is cited. This directive converts moral concerns into legal constraints. But it is no use me standing up and proclaiming what I know to be true – and I suspect this wise judge knows too – that killing these innocent animals is wrong. Only the law matters in this room. Equally, and to me equally shockingly, scientific arguments have no place here either. Science is admissible only in as far as it is used to demonstrate a shortcoming in the Welsh assembly's behaviour – a breach of the law – if that can be proved. So all of us – these QCs, this room, this whole country, and its human inhabitants, are reduced to squabbling over some small points that might, or might not, constitute a technical crime in law. I find this infinitely demeaning and frustrating. Concerning the glaring moral injustice, the cruelty, the arrogance of assuming that we have the right to treat any animal like this – ever – we have to remain silent.

It's apparent that if the ministers' QCs can make enough excuses for their alleged concealment of relevant information, they will be able to squirm out of any accusation. Unless the judge can find a way to interpret the law to be merciful to Wales's other population – the lovely badgers.

Everybody here shares a common bond. We all want to eliminate bovine TB from the Welsh countryside. But we disagree as to how it can be done. In effect, we have a David and Goliath scenario here. A small team leads the challenge to the decision to kill thousands of badgers this year, based on mistaken, and misunderstood advice. This little team's efforts are paid for by the limited amount of cash that the tiny Badger Trust can scrape together – virtually bankrupting themselves to try to save the lives of these furry creatures.

They are pitted against a powerful legion of top legal performers – QCs, barristers and advisors – apparently on a fat juicy budget paid for, ironically, by Welsh taxpayers. It's manifestly unfair. Or would be, if it weren't for the fact that, presiding above it all, is a judge with an apparently limitless capacity for careful listening and the evaluation of everything that is being hurled at him. We see him being encouraging to the QC – making sure that no balls are dropped. Our QC is meticulously polite to the judge, sometimes evoking guarded smiles from the opposition. Perhaps they think he is trying too hard and doomed to failure – his slingshot dwarfed by their mighty cannon? Perhaps they see this whole escapade as a mere fleabite on the long muscular arm of ministerial might.

Our QC, still ploughing on, suddenly becomes crystal clear: "We cannot go out killing badgers in Wales, a protected species, without a damned good reason!" Well, that's a paraphrase, but it sounded like this to me. I could feel a little movement of air in the room. This was stirring stuff: we all were gasping for the sound of a distant bugle, a sign that our colours were flying. We're returning to the significant assertion that the Welsh assembly called the benefits of the cull by the ISG "substantial" when they clearly were not. Now the important question of "necessity" – was it necessary to instigate a killing spree to fight against bovine TB? Was there no other viable alternative? Well, yes, there was vaccination, so, yes, there evidently was a possible alternative, which was ruled out by the ministers.

The Welsh assembly's two barristers are still waiting to present their case. But the judge alone will decide the outcome, based on the validity of the arguments. And if there is a fair decision to be divined within the framework of the law, I would trust this judge more than any man I can think of to find it. Vive la Justice! Vive le Badger! Well, Europe has a hand in this. If the decision goes against us, I imagine an appeal based on morality rather than law might one day be pursued in Europe.

OK. Our chap has 20 minutes left until close of play. He's evidently going to be the night watchman. So I won't get to see the opposition go in to bat. Unless I cancel tomorrow. Can't do that. Deadlines to meet. Kerry's album will not get finished by itself. And it's seven hours to and from Swansea. Maybe I've done enough. Poking my English nose in has attracted lots of attention for this case. And I've met many of the principal players on both sides, face to face.

Enter "Brian May" in the blog's search engine for more.
Posted by Mercury at 7:54 AM