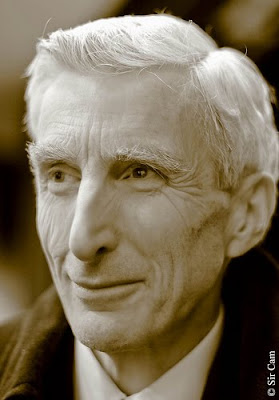 The Sidney Morning Herald
One of the world's most eminent astrophysicists and the president of the Royal Society, Lord Rees of Ludlow, believes the global village is ripe for salvation, writes Paola Totaro.

Lord Rees of Ludlow, astrophysicist and Astronomer Royal, is running a little late. Not delayed by the hiccups of mere mortals, mind - the Tube, traffic, sick children - but a high-level meeting on global nuclear arms control and disarmament.

As president of the Royal Society and Master of Trinity College Cambridge, Professor Martin Rees is one of Britain's foremost scientific brains, a cosmologist of world renown and a revered public intellectual.

When he arrives back in his office in an elegant Georgian terrace on Pall Mall, his PA, clearly practiced, places a cup of tea in his hand as if it were a relay runner's baton. He sits down deep into a blue velvet armchair looking, quite frankly, exhausted.

A small man still blessed with the lean physique of a marathon runner, Rees is quietly spoken, but you sense the steel within. The corridor leading to his office speaks of the pantheon of scientific greats that have preceded him as Royal Society presidents or fellows: Samuel Pepys, Charles Darwin, Charles Babbage, Sir Joseph Banks. Behind his work table, an oil portrait of Sir Isaac Newton, nearby a remarkable and contemplative pencil sketch of Albert Einstein.

Yet another frame contains the words of advice presented to James Cook just before his first voyage by an earlier society president, the Earl of Morton: ''Exercise the utmost patience and forbearance with respect to the natives of the several lands where the ships may touch.''

It is advice that Rees might find handy when he visits Australia at the end of the month to deliver the inaugural Derek Denton lecture in science and the arts at Melbourne University.

The Astronomer Royal's field might be theoretical physics and the very frontiers of science, but right now his greatest preoccupation is Carl Sagan's ''little blue dot'', our own planet Earth, and the imperatives posed by climate change are foremost in his mind.

I ask him if he is aware that an Australian opposition leader effectively lost his post due to climate change scepticism among his political colleagues and he allows a small laugh: ''Yes, yes, yes.''

Then, a pause and the gentleman scientist leaves no doubt about what he thinks about that: ''It is unfortunate that there is a debate about the science, and the reason that comes about is that many members of the public can't discriminate between genuine expertise and strongly-held opinions that aren't based on expertise.

''To give an analogy: if you suffer from some unusual disease, you may go on the internet and get all kinds of alternatives [for treatment], but you would be very foolish if you attached as much weight to all the blogs on the internet as you would to a qualified specialist on the subject.

''And I think that in assessing the evidence for potentially dangerous climate change, it is very important that members of the public should behave in the same way that they would if some medical issue was at stake. They should accept that not everyone's opinion is of the same value and that those who have credentials and have studied the subject do deserve to be listened to.''

In his celebrated book, Our Final Century, Rees pondered the threats faced by humans in the 21st century, from natural events such as super-eruptions to man-made catastrophe such as nuclear terrorism, bio-engineered viruses and over-population. The prognosis, from such an eminent thinker, is disquieting: humankind, he estimated, has a 50 per cent chance of surviving the next century.

Today, however, the scientist is keen to temper this world view with a glass-half-full message: salvation is possible in the hands of intelligent, global-thinking leaders working hand-in-hand with an ethical and united scientific community.

''I don't want to present myself as gloomy because if we look around the world, this is the best time for most people to be alive. More people today enjoy an acceptable and enriching standard of living than has ever been the case in the past.

''So scientists must be concerned too with ensuring that we do not develop greater inequalities and that the huge areas of poverty in the world, places like Africa and Asia, where population is continuing to rise and a billion people live on less than a dollar a day, can be supported. The benefits of science must be accrued also by the developing world.''

Rees's personal contribution to the world of science has been extraordinary. He has enhanced our understanding of the formation of galaxies and clustering, and his specialty, cosmic microwave radiation, has illuminated the make-up and origins of the mysterious electromagnetic forces that fill the universe.

He was one of the first theorists to propose that quasars are powered by enormous black holes and his work to map and explain how quasars are distributed helped dismantle the model of the universe developed by Fred Hoyle which was known as Steady State Theory and had been presented as an alternative to the Big Bang Theory.

There is a great possibility of alien life, he conjectures, but chances are they may be in a form beyond our understanding: ''I suspect there could be life and intelligence out there in forms we can't conceive. Just as a chimpanzee can't understand quantum theory, it could be there are aspects of reality that are beyond the capacity of our brains.''

Rees is also the author of 500 research papers and seven books on astronomy, five of them written for lay readers. As we continue to chat - and later, after reading several of his speeches, including the 2008 talk ''Challenges to Science'' delivered at the prestigious Athenaeum Lecture - it is clear that communication is his other extraordinary talent.

Rees is masterful and uses a simple, elegant eloquence to paint the big picture for humankind, explaining complex theoretical achievements and delivering profound messages with the rhythm of a practiced storyteller. He punctuates science with historic anecdote, a gentle joke with piercing warnings.

A theme in his public speaking has been what he calls the ''downside'' of scientific innovation and the uniquely modern vulnerabilities that stem from the potential misuse of science.

"Biotechnology holds huge promise for health care, for enhanced food production, even for energy. But there is a down side … [all you need] is a fanatic, a weirdo with the mindset of those who now design computer viruses - the mind set of an arsonist. The techniques and expertise for a [biological] or cyber attack will be accessible to millions.

''The global village will have its village idiots. In a future era of vast individual empowerment by bio, cyber or nano technology, where even one malign act would be too many, how can our open society be safeguarded? Will there be pressures to constrain diversity and individualism? Or to shift the balance between privacy and intrusion?

''These are stark questions but I think they are deeply serious ones.''

Rees is, of course, also a member of the House of Lords, and I ponder aloud if it is frustrating for him as a scientist to deal with the minuscule horizons imposed by electoral and political cycles - especially when grappling with global problems like climate change that are unlikely to manifest in the short term.

Another small laugh: ''Absolutely. Even if there is agreement about the science … and the science of climate change is intricate … it is a doddle compared to economics and politics.

''Global warming poses a unique political challenge for two reasons. First, the effect is non-localised: the CO2 emissions from Britain have no more effect here than they do in Australia, and vice versa. That means any credible regime whereby the polluter pays has to be broadly international.

''Secondly, in politics, the urgent always trumps the important, and one has to accept that the consequences of climate change will be predominantly felt more than 50 years from now. It is not going to produce disasters in the next 10 or 20 years, so it is an investment in the interest of the next generation. And it is hard to make people value the long-term future as much as the immediate future.''

IT SEEMS incredible to imagine that the academy of science that Rees presides over celebrates its 350th anniversary this year.

It all began on November 30, 1660, when a dozen men gathered not at Pall Mall but nearby at Gresham College to hear the young Christopher Wren give a lecture on astronomy. As the group chatted afterwards, they decided to create a society dedicated to the study of the new and still controversial ''Experimental Philosophy''.

Wren, Hooke, Boyle and the other so-called ''ingenious and curious gentlemen'' had been inspired by the philosopher scientist Francis Bacon, who argued that two imperatives should drive science: the search for enlightenment and the ''relief of man's estate''.

Rees says that while the little group were enthusiasts for what we would now call ''curiosity-driven research'', they were also deeply engaged with the practical life of the nation - most famously in helping rebuild London after the Great Fire of 1666.

As a member of the House of Lords, Rees has walked a similar path, entwining his research and life as an academic while engaging in national life through his politics, his public speaking, travel and educational work.

"But science is becoming important for an increasing range of the issues that confront politicians, be it health, or energy or food production so scientists have quite a role to play. I do admire politicians because they … have a very hard job to persuade people of issues which are made for the long term."

Rees places a number of issues in this too-hard, long-term basket: climate change, food production and food security and in Britain, replacement of ageing power stations ''be they gas or nuclear … These same decisions would be facing Australia as well''.

For the record, he personally believes that Britain and the US should have at least a replacement generation of nuclear power stations while more research and development is poured into alternatives.

I ask if it is odd to be talking about such short time frames - 50 or 100 years - when in his line of work it is more likely to be millions of light years.

''Yes, as an astronomer, I do in my professional life think about huge time scales. But that doesn't make me worry any less about what happens next year or next week or next decade. It gives one a special perspective … because if we think of the Earth's history, even over its 4½-billion year life span - 45 million centuries - then this century is unique because it is the first in which one species can have an impact on the whole planet.

''That is why we do need to think globally and think on the right time scale … which is long-term by the normal standards of political decisions.''

With that, the professor is off.

Not to lunch, though, but back to chairing his meeting on a new nuclear non-proliferation treaty. The last one, from five years ago, was ''a disaster'', and as he made clear in that wonderful Athenaeum speech, Rees wants to ensure that we humans don't ''destroy the book of life before we have read it''. 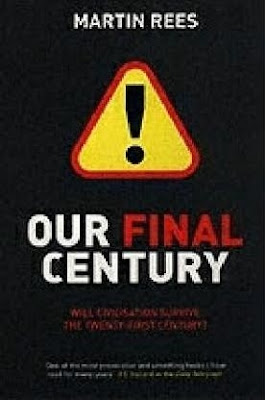 Our Final Century: Will the Human Race Survive the Twenty-first Century?

oh the gloom and doom....somehow manunkind will survive, not all mind you, but it will survive....but the inevitability is there in the cards...and that may be the Royal Flush of humanity from the solar system