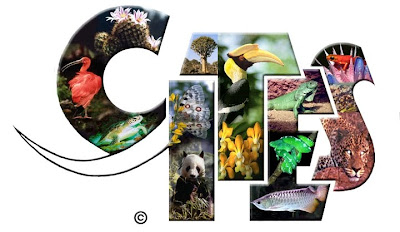 BBC News
Sales of ivory and a possible ban on trading bluefin tuna top the agenda for the two-week CITES meeting that opens this weekend in Doha, Qatar.

CITES - the Convention on International Trade in Endangered Species - will set a precedent if it votes to ban trading in a lucrative fish such as bluefin.

The US and EU back the proposal, but Japan is set against.

The ivory and tuna issues are both potentially controversial.

International ivory trading was banned in 1989.

But countries considered to have well-managed stocks of elephants and reliable systems for tracking tusks have three times been allowed to sell consignments from government stockpiles.

Zambia and Tanzania are now seeking permission for a further sale.

But other African nations led by Kenya and Mali want a 20-year ban on all ivory exports. They argue that the legal trade stimulates poaching, which has been on the rise in recent years.

"To permit any step towards further trade in ivory makes no sense whatsoever - it flies in the face of every basic conservation principle and is contrary to the agreement made at the last meeting," said Jason Bell-Leask from the International Fund for Animal Welfare (Ifaw).

However, the organisation Traffic - which is charged with collecting data on illegal elephant killings and ivory smuggling - maintains there is no proof of a link.

Data from its Elephant Trade Information System (Etis) shows that the rate of seizures of illegal ivory began rising well in 2004, well before the last one-off legal ivory sale was authorised in 2007.

And the previous one-off sale, in 1999, co-incided with a fall in seizures.

Etis manager Tom Milliken argues that African governments wanting to stem the rising ivory tide would be better advised to step up enforcement efforts against poachers and traders.

And China, the principal market for illegal ivory, should live up to its promises to act against smuggling gangs, he says.

Otherwise, he says: "Arguments over the impacts of one-off sales will continue to divert attention away from the real problem: finding ways to stop the flow of illicit ivory at source."

The chances of CITES voting to ban the international trade in Atlantic bluefin tuna increased markedly during the week when - after months of wrangling - the EU decided to give its support.

The bloc includes several nations with tuna fleets in the Mediterranean, the main fishing ground.

Conservation groups argue that the ban is needed because governments involved in the industry have allowed overfishing to such an extent that the species' survival is in some doubt.

They also argue that a pause in fishing will eventually lead to higher catches.

"This is a key conservation moment - whether the governments here will vote for the conservation of bluefin tuna, or will allow commercial fishery interests to prevail, further causing over-fishing and continued decline of this iconic species," she told BBC News from Doha.

Japan has indicated that it would opt out of a trade ban, as it is entitled to do under CITES rules.

But if all other tuna fishing countries went along with it, there would be no supply of tuna to import.

Conservation groups are urging the EU and US to make sure that other tuna fishing countries, particularly North African states bordering the Mediterranean, do not opt out.

The CITES meeting will also consider a US proposal to ban international trade in items originating from polar bears.

Rapid melting of Arctic sea ice in recent decades has placed the polar bear on the Red List of Threatened Species.

About 2,000 items are traded internationally each year, including skin, skulls, teeth and claws.

Although this is not considered to be the major threat to the species' survival, the US feels that the trade ban would be a help, and would not intrude on the rights of Arctic indigenous peoples with a history of hunting polar bears for meat and skin.

Other proposals would see trade banned in a number of reptiles and amphibians, including three iguanas from Mexico and the critically endangered Luristan newt of Iran.

Four species of shark are also up for consideration, as are the red and pink Corallium corals from the Mediterranean that are used in the jewellery trade.
Posted by Mercury at 9:21 AM

while living in Mexico i saw a lot of banned goods in shops in Puerto Vallarta....sickening