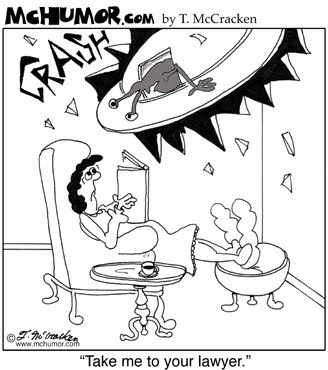 CASE NUMBER 4530949
OLSEN vs GORT
Maybe this is a given in mankind's history...laws and lawyers are always present...who owns what in space and liability claims.

guardian.co.uk
Would-be lawyers at a British university are taking a lesson from the Starship Enterprise and boldly going into the potential legal conundra of outer space.

For the first time in a UK syllabus, a module on law and the legal system beyond Earth's atmosphere will be included as an option for students starting at Sunderland University in September.

"It is a fascinating topic, which many students will benefit from studying," said Viv Kinnaird, dean of the faculty of business and law.

Topics already arising in the field include gaps in health and safety for potential space tourists, and damage to satellites from other objects orbiting the Earth. Looking further ahead, some lawyers have raised questions about land titles on the moon or other planets.

Chris Newman, one of the lecturers who will be teaching the module, said: "It is a growing area which has relevance across commercial, company, property, environmental, intellectual property and IT practice sectors. We think that our qualification will offer valuable knowledge in a fascinating area."

The course will offer relief from more conventional topics in the three-year bachelor of law degree such as pensions law or conveyancing. Ben Middleton, another of the staff lined up to teach the course, said: "We expect it to be an extremely popular module."

The syllabus is likely to draw on earlier attempts to extend legislation into uncharted areas, such as the arguments between nations over huge sections of Antarctica. There are no plans as yet to test students on how they would make a case for Earth law against that of other civilisations, should any be discovered.
Posted by Mercury at 5:03 AM