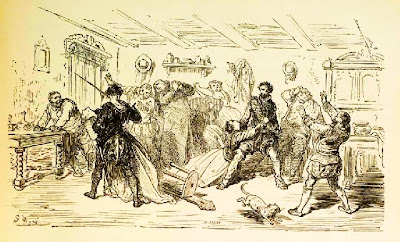 "Cumulating converging evidence" [a statistical probability feature] is providing reasonable proof for the validation of a lost Shakesperean play Cardenio [The History of Cardenio].

An academic claims that an 18th century play, called "Double Falsehood," was based on a work by William Shakespeare.

DiscoveryNews
Is this love's labor no longer lost? A scholar says a play written in the 18th-century is very likely based on a missing work by William Shakespeare.

After years of literary investigation, a professor at the University of Nottingham said Tuesday he's certain "Double Falsehood, or the Distressed Lovers" was born out of "Cardenio," a play Shakespeare scholars believe existed.

Some scholars believe Lewis Theobald's "Double Falsehood," first performed in London's West End in December 1727, was based substantially on the Bard's "Cardenio."

"There is definitely Shakespearean DNA," said English literature professor Brean Hammond, who has worked since 2002 to determine if "Double Falsehood" has Shakespearean roots. Arden Shakespeare, an authoritative publisher of the Bard's works, has released an edition of the play edited by Hammond -- a decision the publisher acknowledges is controversial.

Arden's general editor, Shakespeare scholar Richard Proudfoot, agrees with Hammond and says there is no absolute way of knowing if "Double Falsehood" is based on Shakespeare's work, but he argues it is a "sufficiently sustainable position" that it represents the play in some form.

"My position is one of fairly confident -- but cautious -- acceptance," he said.

"Double Falsehood" is inspired by Don Quixote, and features two female protagonists, dashing leading men, and an aristocratic villain. "An interrupted marriage, a series of mad scenes and a near-rape ensure that the play does not lack incident," Arden Shakespeare said in statement.

Theobald said at the time he'd based his work on Shakespearean manuscripts. But few believed him, and Theobald was considered a fraud by many.

There is strong evidence "Cardenio" existed: records showed the actors in Shakespeare's company were paid for acting in it. And Hammond said Theobald claimed he had used three of the Bard's manuscripts when he wrote "Double Falsehood".

"The first 10 days, when it was running in the theater at Drury Lane, were good," Hammond said. "It got a good reception."

But people began to wonder. It was missing some Shakespearean hallmarks, like lengthy soliloquies. Then, cultural grandees began weighing in, and not in a positive way.

"That was embarrassing for Theobald because he was trying to make his reputation as the great Shakespearean scholar of the day," Hammond said.

Prof. Tiffany Stern, a professor of early modern drama at Oxford University, said that Theobald could have published the manuscripts he claimed to have as proof that he'd been working with Shakespeare's material.

Alexander Pope, who had feuded with Theobald, chose the playwright as the focus of "The Dunciad" -- a work in which a dunce replaces the Iliad's hero. And Pope's work is what brought Hammond from the 18th century to Shakespeare. He was working on Pope in the 1980s, and decided to investigate "Double Falsehood" further.

"I thought, I'll dig this out and read it, and I thought that this certainly has something behind it," he said. "It's not a forgery."

But it was 2002 before Hammond returned to the Bard. Proudfoot said he was willing to consider the evidence Hammond turned up, which the scholar considered "a huge boost."

Hammond's analysis turned up strong links to Shakespeare in elements like spelling, imagery and syntax.

Stern agrees there's a very real possibility that the play contains the bones of Shakespeare's work -- but also believes there are strong reasons why it may not, citing Theobald's obsessions with both Don Quixote and the Bard.

Scholars are keen to find another Shakespearean play, she said, and so want to believe that "Double Falsehood" is that work.

In "Double Falsehood," Hammond said he found the presence of three writers -- Theobald, Shakespeare, and John Fletcher. Shakespeare and Fletcher had collaborated on two other plays: "Henry VIII" and "Two Noble Kinsmen."

Proudfoot said that in recent years, opposition to the suggestion that Shakespeare worked with other writers has faded, which helps their belief that "Double Falsehood" had its genesis in "Cardenio."

"It all depends on your take on Theobald -- whether he's a a great scholar and an honest man, or a hoaxer," Proudfoot said. "We believe the former is the truth."

The History of Cardenio
Posted by Mercury at 1:10 PM