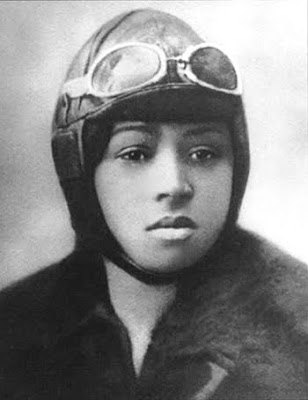 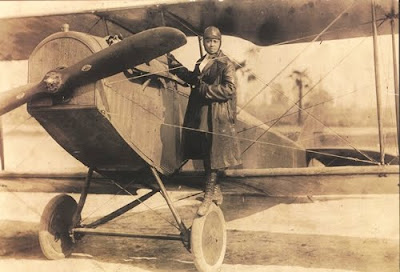 "Bessie Coleman Should Be Celebrated"

Ohmynews
The month in which International Woman’s Day is held draws to a close. I think March should end as it began, by celebrating the achievements of women. Many names, in many cultures and in different times come to mind. However, few names illustrate so graphically and brilliantly the ne plus ultra of womanhood as Bessie Coleman.

Bessie Coleman was a black woman born in Atlanta, Texas in 1892. Bessie breathed the toxic atmosphere all black people of her time were forced to inhale: racism. The dread of being lynched on the whim of their white countrymen was a reality for every black person in the South of the United States at that time. This fear was impressed upon her mind at the tender age of 6 when, in a nearby town, a black man was lynched for an alleged crime.

Growing up Bessie helped her parents earn their meagre living picking cotton. In the little free time she had, Bessie attended a school, which was four miles away, and had so few resources that students often lacked paper or pencils.

Bessie Coleman’s imagination was lit by the daring tales of fighter pilots from the First World War. It is probable that she had heard of the exploits of the first, and probably only, black American fighter pilot of that war Eugene Bullard. She began to imagine the unimaginable. Bessie Coleman wanted to become an aviator.

Female aviators in the beginning of the 20th century were white, wealthy, well-educated and socially well-connected. This made the gender barrier almost insignificant. This was not the case for black women, or men for that matter. A combination of racist laws and attitudes meant it was impossible for black people to learn to fly in America. Bessie’s poverty, gender, color, lack of influential connections and rudimentary education should have kept her dreams, dreams.

Bessie’s philosophy was "where there’s a will, there is a way," and Bessie had a Herculean will. She knew France was a more racially tolerant country than America, and more importantly the French would permit her to take flying lessons. So working two jobs she saved for the trip to France, took French lessons and before leaving for Paris in 1920 she had reached a high degree of proficiency in French.

On June 15, 1921 after months of rigorous training, and witnessing a fatal air accident of a fellow student, Bessie Coleman made history. She became the first black woman to be awarded an international aviation licence and an aviation pilot’s license. However, for Bessie Coleman her flying career had only just got off the ground. She travelled to Holland and Germany taking advanced flying courses from the Fokker Corporation, at the time it was the world leader in Aeronautic design and training.

Bessie Coleman received a hero’s welcome upon her return to America. The press were full of praise at her achievements. It’s ironic the same America that refused to teach her to become an aviator, now embraced her because she was an accomplished one. Bessie Coleman like most pilots of her time, made a living performing stunts. Her skill and daring were legendary.

Bessie lived as she died. In the air. In 1926 making final preparations for an air show a fatal combination of a misunderstanding with her co-pilot and mechanical error led to her death.

Bessie Coleman both metaphorically and literally spent her life in the clouds. She flew above racial, sexist, economic, educational and class barriers to realise her dream. In a month dedicated to women, I cannot think of none greater than the great aviator Bessie Coleman.

Bessie Coleman, the first African American female pilot, grew up in a cruel world of poverty and discrimination. The year after her birth in Atlanta, Texas, an African American man was tortured and then burned to death in nearby Paris for allegedly raping a five-year-old girl. The incident was not unusual; lynchings were endemic throughout the South. African Americans were essentially barred from voting by literacy tests. They couldn't ride in railway cars with white people, or use a wide range of public facilities set aside for whites. When young Bessie first went to school at the age of six, it was to a one-room wooden shack, a four-mile walk from her home. Often there wasn't paper to write on or pencils to write with.

When Coleman turned 23 she headed to Chicago to live with two of her older brothers, hoping to make something of herself. But the Windy City offered little more to an African American woman than did Texas. When Coleman decided she wanted to learn to fly, the double stigma of her race and gender meant that she would have to travel to France to realize her dreams.

It was soldiers returning from World War I with wild tales of flying exploits who first interested Coleman in aviation. She was also spurred on by her brother, who taunted her with claims that French women were superior to African American women because they could fly. In fact, very few American women of any race had pilot's licenses in 1918. Those who did were predominantly white and wealthy. Every flying school that Coleman approached refused to admit her because she was both black and a woman. On the advice of Robert Abbott, the owner of the "Chicago Defender" and one of the first African American millionaires, Coleman decided to learn to fly in France.

Coleman learned French at a Berlitz school in the Chicago loop, withdrew the savings she had accumulated from her work as a manicurist and the manager of a chili parlor, and with the additional financial support of Abbott and another African American entrepreneur, she set off for Paris from New York on November 20, 1920. It took Coleman seven months to learn how to fly. The only non-Caucasian student in her class, she was taught in a 27-foot biplane that was known to fail frequently, sometimes in the air. During her training Coleman witnessed a fellow student die in a plane crash, which she described as a "terrible shock" to her nerves. But the accident didn't deter her: In June 1921, the Fédération Aéronautique Internationale awarded her an international pilot's license.

When Coleman returned to the U.S. in September 1921, scores of reporters turned out to meet her. The "Air Service News" noted that Coleman had become "a full-fledged aviatrix, the first of her race." She was invited as a guest of honor to attend the all-black musical "Shuffle Along." The entire audience, including the several hundred whites in the orchestra seats, rose to give the first African American female pilot a standing ovation.

Over the next five years Coleman performed at countless air shows. The first took place on September 3, 1922, in Garden City, Long Island. The "Chicago Defender" publicized the event saying the "wonderful little woman" Bessie Coleman would do "heart thrilling stunts." According to a reporter from Kansas, as many as 3,000 people, including local dignitaries, attended the event. Over the following years, Coleman used her position of prominence to encourage other African Americans to fly. She also made a point of refusing to perform at locations that wouldn't admit members of her race.

Coleman took her tragic last flight on April 30, 1926, in Jacksonville, Florida. Together with a young Texan mechanic called William Wills, Coleman was preparing for an air show that was to have taken place the following day. At 3,500 feet with Wills at the controls, an unsecured wrench somehow got caught in the control gears and the plane unexpectedly plummeted toward earth. Coleman, who wasn't wearing a seat-belt, fell to her death.

About 10,000 mourners paid their last respects to the first African American woman aviator, filing past her coffin in Chicago South's Side. Her funeral was attended by several prominent African Americans and it was presided over by Ida B. Wells, an outspoken advocate of equal rights. But despite the massive turnout and the tributes paid to Coleman during the service, several black reporters believed that the scope of Coleman's accomplishments had never truly been recognized during her lifetime. An editorial in the "Dallas Express" stated, "There is reason to believe that the general public did not completely sense the size of her contribution to the achievements of the race as such."

Coleman has not been forgotten in the decades since her death. For a number of years starting in 1931, black pilots from Chicago instituted an annual fly over of her grave. In 1977 a group of African American women pilots established the Bessie Coleman Aviators Club. And in 1992 a Chicago City council resolution requested that the U.S. Postal Service issue a Bessie Coleman stamp. The resolution noted that "Bessie Coleman continues to inspire untold thousands even millions of young persons with her sense of adventure, her positive attitude, and her determination to succeed."

THE NINETY-NINES-INTERNATIONAL ORGANIZATION OF WOMEN PILOTS

THE DuSABLE MUSEUM-FIGHT TO FLY: BLACKS IN AVIATION EXHIBIT

quite a fascinating woman.....