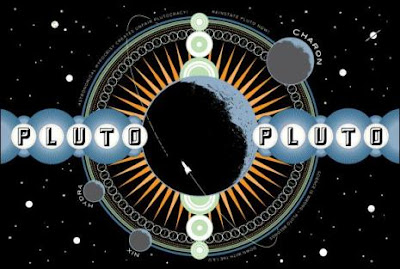 COSMICLOG
It's sad to see how many people are willing to pick on a dwarf planet when it's down. Take Pluto, for instance: A couple of years ago, when I visited a "solar system walk" that was erected near my hometown in Iowa, there was a big black X drawn across Pluto's name - as if it didn't belong in the lineup because of its controversial reclassification in 2006.

That was one of the reasons why I wrote "The Case for Pluto." I felt as if somebody had to stand up for the little guy.

I'm feeling a lot better these days: Over the past week, I've been in Iowa, Wisconsin and Illinois to talk with Midwesterners about the book, and I've been heartened by the experience. Although the faded X can still be seen on the solar system monument in Mount Vernon, it looks as if Pluto and its little pals are finding their proper place, figuratively and literally.

That's a particularly apt development for 2010, which marks the 80th anniversary of Pluto's discovery. Feb. 18 was Pluto Discovery Day, celebrating the date when farmboy-turned-astronomer Clyde Tombaugh spotted the new world. Another milestone comes on Saturday: That's the anniversary of the Lowell Observatory's announcement of the find.

March 13 was an important date on the observatory's calendar back then, because it was the birthday of the facility's late founder, Percival Lowell, as well as the day when English astronomer William Herschel discovered Uranus in 1781. That's why the Pluto announcement was carefully planned for March 13 in 1930. The date retained its significance after Pluto's reclassification, when the New Mexico and Illinois legislatures chose March 13 for their rebel-rousing "Planet Pluto" observances.

One of the centers for this year's Pluto rebellion is Seattle, where the Greenwood Space Travel Supply Co. is planning a Saturday teach-in and rally to protest the indignities suffered by the dwarf planet (and poke a bit of fun). During the lead-up to the rally, writers have been invited to work up "persuasive essays on whether Pluto should be a planet or not be a planet," said Justin Allan, store manager and event organizer.

Allan admitted that the Seattle crowd might be a bit biased on the pro- or anti-Pluto question: "Most of them pick 'pro,'" he told me.

Meanderings in the Midwest

Normally, that'd be my kind of event, especially since my home is just a few miles east of Seattle. But instead, I'm in the Illinois town of Streator, where Clyde Tombaugh was born, to talk with students and residents about Pluto and the latest chapters in the saga of planetary science.

It's been a great month for Streatorites, who came off looking pretty good in "The Pluto Files," a documentary broadcast on public-TV stations last week. "Since 'The Pluto Files' aired on PBS, we have been inundated with inquiries about Pluto events," Ed Brozak, the town's tourism director, told me.

Today, I'll be participating in some of those events: I'm scheduled to visit Streator's schools and City Hall to talk about Pluto, the history of the search for planets and where discoveries to come might take us.

I'm not the only one trying to put Pluto in its rightful place: On Wednesday, Jim Lattis, an astronomer at the University of Wisconsin at Madison and director of the university's Space Place outreach center, filled me in on the status of Dane County's Planet Trek.

Like Mount Vernon's solar system walk, the Planet Trek bike trail was designed to provide a down-to-earth perspective on planetary distances. When the course was put together last spring, the 865,000-mile-wide sun was represented by a 24-foot-wide circle. Signs standing for the various planets were erected at points spaced apart using the same scale. Mercury was just 0.19 miles away in central Madison. Pluto was at the end of the line, 23.8 miles away in Mount Horeb.

The signs were taken down for the winter, but Lattis is getting ready to re-erect them in April. He's also looking for contributors who'd be willing to support a permanent set of spiffier planetary monuments.

Lattis said he hasn't gotten all that much grief over including Pluto as well as Ceres, another dwarf planet that is the largest thing in the asteroid belt. "Some people would say, 'But Pluto isn't a planet anymore,' but I'd say, 'Well, it's still part of the solar system,'" he told me.

He thinks the dwarf-planet designation, which was created when Pluto was reclassified, will be handy in the years to come as more such objects are discovered on the solar system's icy rim. "By one name or another, astronomers are trying to distinguish these objects that are big enough to deform themselves into spheres by self-gravity," he said. "It's a natural enough definition."

"When someone says the earth is 93 million miles from the sun, my mind can't grasp that," Bill Quinnell, the chairman of the observatory's board of directors, told The (Danbury) News-Times. "But when they say, imagine the sun is six feet in diameter and, if you want to argue about whether Pluto is a planet or not, you're going to have to go to Canterbury School to see - that I can wrap my mind around."

When it comes to wrapping your mind around the structure of our solar system, it's better to have more than less. At the McCarthy Observatory, there are monuments for the Kuiper Belt and the Oort Cloud on the solar system's fringe, plus a marker that serves as the "gateway to the galaxy." (If I had the power to add just one more monument, I'd probably go with Ceres and the asteroid belt.)

Actually, anyone has the power to build a solar system model, thanks to Web pages like this one (and this one). San Francisco's Exploratorium has a Web page that lets you choose how big you want your solar system to be, and then runs the numbers for sizes and distances of the scaled-down planets.

One of my favorite scale models is at New York's American Museum of Natural History, which played such a prominent role in "The Pluto Files." The Hayden Planetarium is built into an 87-foot-wide sphere that stands in for the sun. Jupiter is about 9 feet wide, Earth is the size of a basketball (10 inches), and Mercury is the size of a softball (4 inches).

The biggest drawback is that the display downplays Pluto and the other small fry. You can get an idea of the size comparison by looking at the picture on the "Where's Pluto" plaque - but if you bring a handball to the museum (1.875 inches wide), you'll get the full 3-D perspective. Eris, the only known dwarf planet larger than Pluto, would be just a bit bigger. Ceres would be significantly smaller, about as wide as a penny or a marble.

If you were to arrange the museum's scaled-down planets to reflect their scaled-down distances from the sun, Earth would be about 1.8 miles away. Pluto would be 58 miles away. Eris would be 175 miles away. It turns out that a bicyclist could travel this scaled-down solar system at the equivalent of the speed of light in the real universe (8 minutes to Earth, 4.4 hours to Pluto, 13.4 hours to Eris).

But don't expect to ride your bike to the next star over: Even in this scaled-down universe, Proxima Centauri would be almost 487,000 miles away - more than twice as far as the real-life moon. That's just one more way to get across the message that space is vastly, hugely, mind-bogglingly big - and that all the bits of rock and ice in our own solar system are mind-bogglingly small.

If that doesn't put us in our place, nothing will.
Posted by Mercury at 8:17 PM

Alan Boyle's book does a wonderful job making the case for the planet status of Pluto and all dwarf planets, and I encourage anyone interested in this debate to read it. The language is clear and accessible without "talking down" to readers. There is even a great section at the end about how to talk to kids about planets.

"The Case for Pluto: How a Little Planet Made a Big Difference"