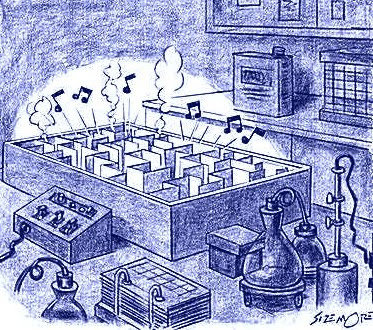 After hours in the lab.
Should animals be used for scientific experiments?

For any conscientious human, this should be a no brainer. Hardly anyone wants to do harm to animals but yet animal experimentation can be quite beneficial to themselves and humans. I think that a compromise can be made between the experimenters and the animal rights people. There must be an established and regulated methodology for the humane treatment of all animals used in experimentation: Proper housing and maintenance, no undo suffering, no commercial experimentation, unannounced inspection by a certified board of enforcers, and safe and humane dispatchment of animals.

"Fostering a Civil Conversation About Animals in Research"

Science NOW
In 2006, University of California, Los Angeles, neuroscientist Dario Ringach sent an e-mail to several animal-rights groups announcing that he would give up his primate research if they would leave him and his family alone. After years of threats and harassment, including masked protestors banging on his windows at night, Ringach shifted his research on the visual system to studies with human volunteers and theoretical work.

After keeping a low profile for a few years, Ringach has recently begun speaking out about the benefits of animal research and against a spate of attacks on researchers at UCLA and elsewhere. Along with UCLA neuroscientist David Jentsch, whose car was torched by animal-rights activists in March 2009, Ringach co-founded a pro-research group called UCLA Pro-Test. In February, Pro-Test teamed up with Bruins for Animals, an animal-rights group on campus, to organize a panel discussion among experts with differing views on animal research that was open to UCLA students and staff. Last week, Ringach spoke with Science about efforts to hold a civil conversation on such a heated topic and the renewed attention he's gotten from animal-rights extremists. Follow the links below to a video of the UCLA event and related blog coverage.

Q: What made you decide to start speaking publicly in favor of animal research?

D.R.: After my decision [in 2006], I was left alone [by activists] for a while, but it was hard to watch my colleagues here at UCLA still being targeted with such violence and hate. I was really inspired by David Jentsch. After his car was blown up, he walked into my office and asked if I thought a good response would be to hold a pro-research rally on campus. I decided to join him.

Q: What did you hope to accomplish with the recent panel discussion?

D.R.: We never discussed in detail what the goal was. On the personal side, it was really modest. I wanted to show that we could hold a civilized discussion on this topic.

Q: Who was on the panel?

Our goal was to bring to the panel individuals with a range of positions. One of the misperceptions is that people segregate into these binary positions, that we either support all types of animal research or we condemn everything, and it's not true. People hold a continuum of views on this issue.

Q: Did the discussion accomplish anything?

D.R.: I think we got to know each other a little better. I understand their concerns about animals. And I think they understand that scientists are not the monsters some people are trying to convince the public we are. Our work is not driven by the pleasure of harming an animal, nor by greed, but by our honest belief that we're trying to advance medical knowledge and medicine.

Q: Restricting entrance to current UCLA students and staff may have kept out some of the more extreme activists. How have they reacted?

D.R.: To begin with, we started to get these protests at our homes in the weeks leading up to this event. They were trying to prevent this from happening. Then, after the event, one of these groups decided to justify the targeting of my children by [saying activists should begin] protesting at their school. I'm not even doing any animal research at the moment, I've been targeted just for speaking my mind.

Q: Has there been a counter-response?

D.R.: After they made these threats public, some of the science bloggers expressed outrage to this notion that my children were fair game. And that's when Bruins for Animals joined us in a joint statement denouncing the harassment and intimidation tactics. We're hoping other animal-rights groups will join us. It would be a tremendous step forward. Most of the time when asked, many animal-rights activists will reply that they're not really for violence, but they understand the frustration of some activists. At least the local organizations we're trying to engage have been very positive in saying that we should give dialogue a chance.

Q: Do you really think this type of event can end the threats and intimidation?

D.R.: There is a small group of individuals who are set on using threats and intimidation to convince others of their views, and I don't think there's anything we can do about that. But I think they will become increasingly marginalized, both by the public and by their colleagues in the animal-rights movement. I am hopeful that more open dialogue will force them to decide exactly what they want to do, whether they want to continue with their threats or join us at the table.
Posted by Mercury at 6:23 PM

i do not like to see animals abused either but research is research...