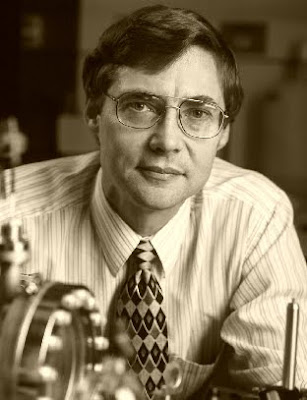 And old response from an academic..."placing teaching over football as the true purpose of the public university." In principle this is good but a university's survival is economic oriented and sports do bring in the bucks. I don't see thousands of people rallying around the University of Kansas' physics department but more for the KU basketball or football teams.

The Globe and Mail
Today, Carl Wiemen works at the University of British Columbia. Soon, he will be advising Barack Obama.

The world-renowned American physicist has been nominated for the post of associate director of science in the Office of Science and Technology Policy at the White House.

Improving both the quality of public education and funding for scientific research is one of the core priorities of the Obama administration, which has committed to boosting research and development in the United States to 3 per cent of GDP.

Prof. Wiemen shared a Nobel Prize in Physics in 2001 (for work on creating new states of matter predicted by quantum physics) and came to UBC in 2006 to head the Carl Wieman Science Education Initiative, which is dedicated to researching better methods for teaching science.

“These aren’t things that you can turn on and off,” he told The Globe and Mail, after the federal budget flat-lined funding for scientific research.

“There’s a long timeline to build things up and you need to maintain it,” he said. “Funding that fluctuates up and down just wastes money ultimately.” R&D in Canada in 2008 represented only 1.84 per cent of GDP.

This year’s budget, in contrast, has received high praise for its commitment to fund both scientific infrastructure and research.

Prof. Wieman, 58, initially came to UBC because he didn’t believe American public universities were placing enough emphasis on teaching students – obsessing instead, as he told Maclean’s magazine, over athletics.

He is not granting interviews, which is customary for presidential nominees who have not been confirmed by the Senate. But his story is remarkable.

He was raised in the backwoods of Oregon, and credits a librarian in a nearby town who let him take out extra books and his Grade 7 science teacher for sparking his love for learning.

He was a mediocre student who had no time for the rote learning embedded in the curriculum of the day, which he says is still far too prevalent in science courses.

“I still have not learned much of the standard material of the undergraduate curriculum,” he confessed, or perhaps boasted, in an autobiography he composed at the time he won the Nobel Prize.

He is “deeply suspicious” of science curriculums that require students to learn the basics in a broad range of topics, observing: “I have had a pretty successful career in optics and atomic physics without having a course in either.”

At the White House, he will be one of four associate directors, responsible for science policy and science education.

“There is a part of me that is a little disappointed that I won’t be seeing Carl on a day to day basis,” said Simon Peacock, dean of science at UBC. But he described the appointment as a “positive validation” of the teaching methods employed at UBC.

It is a validation, as well, for the principle of placing teaching over football as the true purpose of the public university.

Carl Wieman
Posted by Mercury at 7:22 AM