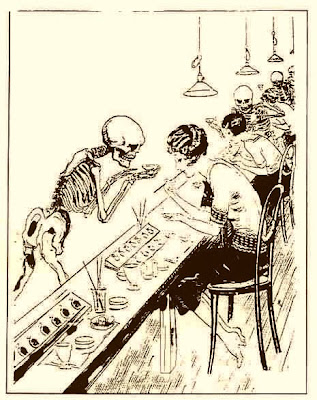 Painting the Luminous Numbers on Watches, the Radium Accumulated in Their Bodies, and
Without Warning Began to Bombard and Destroy Teeth, Jaws and Finger Bones. Marking
Fifty Young Factory Girls for Painful, Lingering,
But Inevitable Death 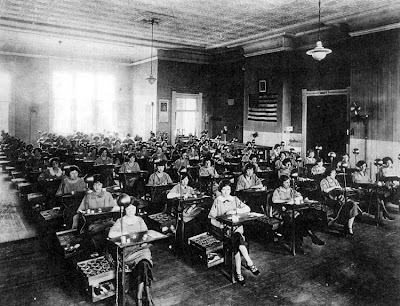 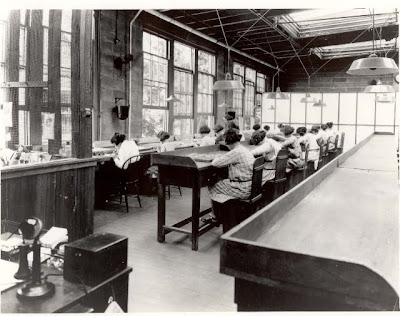 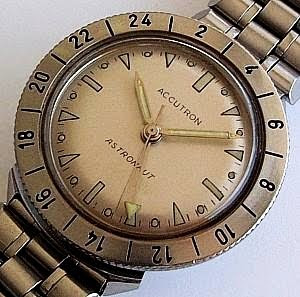 Much in the news in 1925-28, radium was used to paint glow-in-the-dark numbers on watchdials. Most of the dial-painters were young women who, in order to achieve a fine point on their brushes, would lick them before dipping them in the radium solution. As a result, many were poisoned. In March and June of 1925, the New York Times reported on several wrongful death suits filed on behalf of workers employed at U.S. Radium.

In 1918 the Radium Dial Company [a Division of the Standard Chemical Company] began producing radioluminescent dials in Chicago. Most of their work was done for Westclox, so when Westclox asked Radium Dial to move to Peru Illinois where the Westclox clock factory was located, Radium Dial complied. In a few years, Radium Dial moved to nearby Ottawa Illinois because Westclox complained that Radium Dial was stealing its workers with its higher wages. In the mid 1920s, the Ottawa facility was the largest dial painting facility in the US and was producing approximately one million dials per year.

From 1917 to 1926, the U.S. Radium Corporation was located at the intersection of High and Alden Streets in Orange, New Jersey. Dr. Sabin Arnold von Sochocky and Dr. George S. Willis founded the company in 1917. The primary activity at the U.S. Radium Corporation was the extraction and purification of radium from carnotite ore to produce luminous paints, which were produced under the brand name Undark. The plant employed over a hundred workers, mainly women, to paint radium lighted watches and instruments.

During World War I, the U.S. Radium Corporation was a major supplier of luminous watches to the military. However, a major setback for the Corporation occurred when a number of dial painters died from what appeared to be a variety of unrelated health causes. It was later learned that the deaths were due to radiation contamination associated with exposure to radium, one of the prime ingredients of the luminescent paint. A major route of exposure was ingestion, as the dial painters used their mouths to form a point on the radium-tainted paintbrushes, enabling them to paint the small numbers on the watches.

The radium dial painting industry began in the United States in the early 1900’s when it was found that objects painted with radioluminous material were visible in the dark. Several dial painting plants were established to capitalize on this discovery, including the U.S. Radium Corporation in Orange, New Jersey (initially located in Newark, New Jersey) and the Radium Dial Company in Ottawa, Illinois (previously located in Chicago and Peru, Illinois). These plants employed several hundred women to paint watch dials and military instruments with radium paint. Many of these women ingested Ra-226 and Ra-228 (mesothorium) as they 'tipped' brushes between their lips to obtain a finer point.

A New York dentist, Theodore Blum, was one of the first to note the biological effects of radium when he observed what he termed “radium jaw” in a woman who had worked at a New Jersey dial painting plant. Such early cases exhibited “acute necrosis of the jaw, usually involving infection and severe leukopenia and anemia.” Within a few years osteogenic sarcomas began to appear. The practice of tipping brushes was prohibited in the late 1920s.

In addition to those occupationally exposed in the dial painting industry, numerous people ingested radium or received injections for therapeutic purposes. Physicians prescribed radium to treat a variety of ailments such as acne, arthritis, and high blood pressure. Individuals also self-medicated themselves using publicly available “remedies” such as the radium spiked water, Radithor, which was certified to contain 1 µCi of ^226Ra and 1 µCi of ^228Ra.

Dosimetric and exposure information on the persons studied has been catalogued in publications such as Argonne National Laboratory/Argonne Cancer Research Hospital’s The Argonne Radium Studies: Summary of Fundamental Data ANL-7531 and ACRH-106 (January 1969).

Radium in Humans: A Review of U.S. Studies (R.E. Rowland, ANL1994) describes the history of radium research projects and summarizes ^226Ra and ^228Ra intakes, birth and death dates, causes of death, exposure types, and exposure dates/durations for more than 2000 radium dial workers, physicians, patients treated with radium injections, and persons who were exposed to radium for other reasons.

R.E. Toohey's presentation: The Saga of the Radium Dial Painters