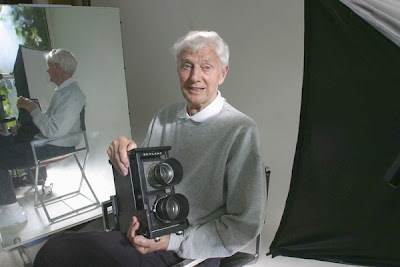 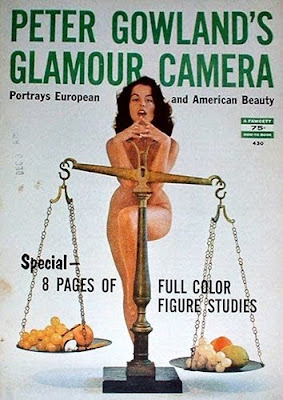 Los Angeles Times
He invented high-quality large-format cameras, designed scaffolding to shoot swimsuit-clad models at his pool and shot more than 1,000 magazine covers. His wife, Alice, was a key part of the business.

Peter Gowland developed a large-format camera to take high-quality photographs, in addition to scaffolding to photograph models in the water and a trough to simulate a waterfall.

Gowland died March 17 at his Pacific Palisades home of complications from surgery for a broken hip, said his wife of 68 years, Alice.

The son of actors Gibson Gowland and Sylvia Andrew, Gowland was born in Hollywood on April 3, 1916, and grew up on motion picture sets. After attending Hollywood High School, he worked as a dress extra -- often in tuxedos and other formal wear -- in movies.

His interest was in being behind the camera, however.

Gowland prowled the studios learning lighting techniques and, sneaking his Rolleiflex camera onto the sets by hiding it in a lunch bag, shot portfolio pictures of fellow actors during breaks in production.

He met Alice Adams when one of her boyfriends asked Gowland to take a picture of her for him. The pair went out together for the first time on Dec. 7, 1941, the day Japan bombed Pearl Harbor. "It was a date that lived in infamy," he later joked. Two weeks later, they eloped to Las Vegas.

Back in California, Alice Gowland began selling copies of pinup photos her husband had shot on the beach. When Gowland was discharged from the military in 1946, the pair launched their glamour photography business.

Throughout the rest of Gowland's career, his wife was at his side. She handled picture sales and cataloged the more than 100,000 negatives he shot. She also assisted in the studio and helped put Gowland's skimpily attired models at ease.

In time, Gowland would shoot more than 1,000 magazine covers. He lectured on glamour photography throughout the United States and Europe and was the author of 26 books on photography.

Gowland and his wife built their home on Rustic Canyon's Hightree Road in 1955, designing it to include an airy photo studio, a dressing room for models, two offices and two photo labs. A swimming pool was outside the studio's sliding wall; a year-round stream in front of the house provided a woodsy backdrop for pictures.

The whitewashed studio featured a wall that seamlessly curved from a white terrazzo floor into a high, white plastered ceiling. A lifelong tinkerer, Gowland built his own photo props as well as special scaffolding for shooting models in the pool and a large trough that created a "waterfall" that could cascade over his subjects.

Along with figure models, the home studio was used for portraits of actors such as Robert Wagner, Deborah Kerr, Rock Hudson and Rhonda Fleming.

In the late 1950s, Gowland designed and built his twin-lens Gowlandflex camera, which used 4-by-5-inch film for high-quality images. He produced and sold about 1,500 cameras that have been used by photographers such as Annie Leibovitz and Yousuf Karsh.

"Peter was a laid-back person, but a curious and creative person," Alice Gowland recalled last week. "He was spiritual without even knowing it. He was an environmentalist before it was popular."

Gowland and his wife shot a documentary film in the 1960s to block the channelization of Rustic Canyon Creek and filmed "Save Will Rogers Beach," which helped derail efforts to reroute Pacific Coast Highway onto an offshore causeway. In the 1980s, they helped lead a campaign against oil drilling in the area.

Along with his wife, Gowland is survived by daughters Ann Macmillan of San Francisco and Mary Lee Gowland of Coarsegold, Calif.; granddaughters Lauren Macmillan of Westlake Village and Tracy Rosenthal Newsom of Boston; and great-granddaughter Camile Newsom, also of Boston.
Posted by Mercury at 7:55 AM