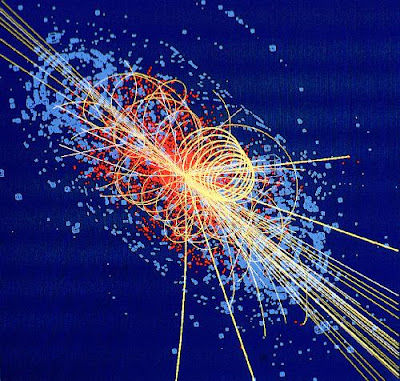 "Time to smash things up"

The Washington Post
They're about to start smashing things up at the Large Hadron Collider, the huge particle accelerator outside Geneva. Just to play it safe, I'm going to remain over here in North America, keeping a large chunk of the planet between me and this experiment.

No, I'm not worried that they're going to blow up up Europe. That's impossible! I'm just worried they'll create a time warp and I'll go back 6 months and be forced to relive the health care debate.

[Or worse: Back 35 years and I'm once again The Human Oddity of Hogtown.]

Seriously, although there are some hand-wringers out there who prophesy the end of the world, there's nothing to worry about. I've been to the LHC. I've been down in the tunnel. I've studied the beam line, the huge magnets, the detectors the size of small apartment buildings. What I can tell you with confidence is that it merely LOOKS like a doomsday machine.

The simple fact is that high-energy physics is already happening all around us all the time -- naturally. Particles are smashing into our atmosphere at the same kind of energy levels as will be created in the LHC. The universe is a big collider of sorts, and it likes to smash things up.

The most likely outcome of the experiment will be a lot of excited physicists and a general public that wonders if it was all worth the money. For example, as readers of this blog know, they're going to try to create a particle called the Higgs boson. But it's not like they're going to make a lot of Higgses and then sell them to tourists at the gift shop. It's not like you can take a Higgs and play racquet sports with it. As I understand it, under the best of scenarios the LHC experiments will merely detect suggestive signs of a Higgs. There will be patterns of particle decay that will hint that the Higgs had been momentarily present on the scene.

Moreover, if we do find evidence of the Higgs, it's not like we can necessarily do anything with this knowledge. This is basic research, not applied research. Which is important. You don't know when a piece of knowledge will pay off in some practical fashion. Someday, maybe, our knowledge of the Higgs will allow us to figure out where we left the remote. But don't expect anything practical to come out of this in the short run, such as a black hole swallowing half of Europe. This is a 10-billion-dollar experiment in search of ephemeral particles that have zero utility and will come and go like a sneeze in a hurricane.

What we should really fear is that scientists won't discover anything they don't fully expect to discover. No one wants the LHC to come up with all the predicted particles. Sparking up a Higgs would be nice, but better yet would be making a Higgs that had green hair and weird facial piercings. The scientists want to find things that catch them by surprise, and which inspire new theories -- "new physics." No one wants to come to the conclusion that we've found out everything that we're ever going to find out. Because then we'd have to fold up shop.

As always, what's really interesting is the unknown, and the journey into mystery.
Posted by Mercury at 6:30 AM