Professor's icon on the way out? 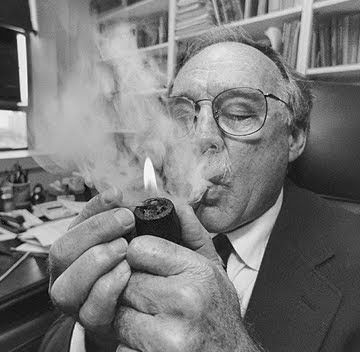 The state of Kansas last week issued strict regulations on smoking and Missouri has similar legislation. Now, a private college is issuing a ban on smoking. This has reached a level of hysteria based not on altruism of an individual's health but a correlation of tobacco born illnesses and the COST of treatment. I would like to see a limitation [and in some cases] a ban of "fast food" restaurants that do contribute to human health care too. Public policy can certainly be misdirected and controlling.

Kansas City Star
FULTON, Mo. | A central Missouri private college plans to ban smoking from its campus, and voters in the surrounding city will decide whether to bar smoking indoors.

"This policy fits into our mission and values by creating a safe, healthy and clean environment for everyone," Forsythe said.

The Fulton Sun reported that faculty, staff, students and visitors would need to smoke inside personal vehicles or off the school's property. The school's fraternity house would follow national guidelines and continue allowing smoking only in designated outdoor areas away from main entrances, walkways and windows.

The Fulton City Council meanwhile decided to let voters decide whether to impose an indoor smoking ban across the city after several months of debate.
Posted by Mercury at 7:53 AM