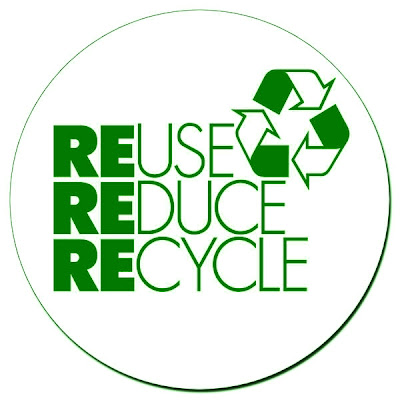 Are you "green" environmentally?

Slate
Do I have to remove the staples when I recycle my magazines? What about envelopes and pasta boxes that have plastic windows in them?

Twenty-five years ago, you would have been advised to keep staples and plastic windows out of the recycling bin. But these days, paper mills are more than equipped to handle these common interlopers. (Plastic bags inside food boxes should still be taken out and placed in the regular trash bin.)

When bales of sorted paper arrive at a mill, they're fed into a huge, blenderlike contraption along with water and chemicals. The resulting pulp then goes through a number of purification steps. First, a long chain called a ragger is lowered into the swirling mixture; things like twine and wire wrap around the chain and get pulled out. A metal screen at the bottom of the pulper picks out more contaminants-this should be when your plastic window fragments are removed. Next, the slurry is spun around in a cone-shaped hydrocyclone-which separates out higher-density items like stones and bits of metal (like staples)-and then it's screened again through a finer mesh. Finally, if the pulp is being made into high-quality product like white office paper, air bubbles and detergents are pumped in to wash away unwanted ink particles.

When I get something in the mail wrapped with packing tape, can I recycle the paper and the box, or will the tape mess things up?

As long as it's plastic-backed tape and there isn't a ton of it on the package, you should be good to go. The tape will break up and be removed by the screens or hydrocyclone. However, anything paper-based that you peel and stick-like labels, children's stickers, or masking tape-may fragment into pieces too tiny to be removed effectively. Those little sticky bits remain dispersed in the pulp slurry; if enough of them coalesce, they can jam up the papermaking equipment or form weak spots in the finished product. (Moisture-activated adhesives-like those used on lick-to-seal envelopes-will dissolve in the water and are fine to throw in the bin.)

Unfortunately, there doesn't seem to be much consensus on which types of peel-and-stick items are worth the trouble of removing. One expert said that address labels on envelopes and magazines are anathema but that Post-its are just fine. Another told the Lantern more or less the opposite-that anything you can pull off easily should be removed, but that anything that would otherwise need to be cut or torn off can be ignored. The best advice is to check the guidelines in your area (which you should always be your first step); if they don't specify, then follow the Lantern's rule of thumb: When in doubt, throw it out. (One item that's generally okay to leave on: U.S. postage stamps, which are formulated with recycle-friendly adhesives.)

Can I recycle paper with Wite-Out on it?

Wite-Out isn't considered a problem, mostly because it's used in such trivial amounts. It will likely flake off in the pulper, and the resulting chips will get screened out. So go ahead and toss in those early drafts of your magnum opus.

How bad is it, really, to throw the occasional greasy pizza box in with your recycling?

Diligent recyclers know that food-contaminated paper is an item non grata in your curbside bin. There are a few reasons for this. For one thing, it means increased costs at the sorting facility. Baled paper can sit for weeks before it gets pulped-plenty of time for any food particles to spoil and rot, making life highly unpleasant for the mill workers. Finally, greases and oils can be tough to remove completely. Whether or not that's going to be a problem depends on what the mill is making-a bit of grease won't be a big deal if the end product is brown grocery bags or tissue paper, but it could easily ruin a batch of white office paper.

Pizza boxes may not be the worst offenders in this regard, because they're big enough to be identified and removed at the sorting facility. Plus, the cheesy residue is likely to stay contained within the box. Recyclers have more trouble with things like salad dressing-oily foodstuffs that might drip onto other items in a bale.

What should I do with old books-can they be recycled?

Yes, but probably not through your curbside program. Some communities, like New York City, do accept paperbacks and phone books, but they won't take hardcovers, which contain problematic binding glues and coatings on the covers. If your library can't be donated or swapped, search the database at Earth911.com for a book recycler in your area. Failing that, you can slice out the pages using scissors or an X-Acto blade and put them in with your regular paper recycling.
Posted by Mercury at 3:07 PM