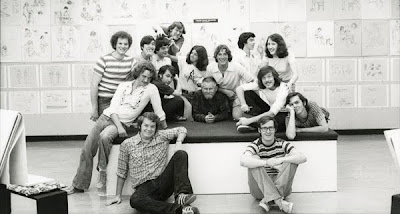 ****
In 1985, when Disney released "The Black Cauldron" to box office disappointment, the studio's animation tradition was on life support. The studio that began a revolution with "Snow White and the Seven Dwarfs" in 1939 seemingly no longer knew how to make an animated feature. Roy Disney, Walt's nephew and the largest single stockholder, masterminded an executive shakeup that brought in three men from Paramount: Michael Eisner, Frank Wells and Jeffrey Katzenberg. That began a second Golden Age at Disney.

It is enough to name the animated films they made: "Who Framed Roger Rabbit," "The Little Mermaid," "Beauty and the Beast," "Aladdin" and "The Lion King." These films proved beyond question that animation was a genre with great international appeal for moviegoers of all ages. Coupled with the home video revolution, they were responsible for literally billions pouring into the studio. Eisner, Katzenberg and Roy Disney however, had personal tensions (Michael and Roy thought Jeffrey was getting too much attention as the studio's boy wonder), and after the peacemaker Frank Wells died in a helicopter crash in 1994, the magical period ended.

"Waking Sleeping Beauty," made by the studio after all but Roy Disney had left (he died in 2009), is an extraordinary inside look at those 10 years. It uses footage and taps into insights, memories and home movies that only insiders would have access to. Its director is Don Hahn, who produced "Beauty and the Beast," "The Lion King" and "The Hunchback of Notre Dame," among others. Another featured narrator is Peter Schneider, who became president of feature animation in 1985, head of Walt Disney Studios in 1999, and left in 2001.

"Siskel & Ebert" was produced by Disney during all of those years, and I had some contact with these men, and with Rich Frank, studio head before Schneider.

Rich would amuse audiences by showing a reel of Siskel and me trashing some of his productions. Michael and Jeffrey insisted that everyone call them -- and everyone else at the studio -- by their first names.

Peter Schneider came onboard with a lower profile. One year at Rancho la Puerta, Chaz and I shared a dinner table with a smart, likable young couple from L.A. After a few days, "Siskel & Ebert" came up. "You know I work at Disney," the man said. "Really? What do you do?" "I'm the president."

It was like that then. I don't know what it's like now. Rumors circulated that Eisner and Katzenberg didn't get along, and countless articles analyzed why Katzenberg left and/or was pushed after Wells' death. A scene in this film goes a long way to explain the tension. When Katzenberg was in charge of all animation, Eisner announced at a studio meeting that a major new animation building would be constructed. It came as news to Katzenberg.

The most fascinating scenes in "Waking Sleeping Beauty" involve the infamous Disney work ethic. Friends of mine at the studio said the unofficial motto was, "If you didn't come in on Saturday, don't even bother to come in on Sunday." Animators worked so hard, they developed anxiety, migraines, carpal tunnel syndrome. The "family studio" required such long hours that some marriages failed. When Katzenberg held a no-holds barred meeting with the animators, he actually teared up at their stories and relented. But he always came in on Sundays.

The film gives good screen time to the artists who created the films with their own minds and hands and work in collaboration. There's even a glimpse of young Tim Burton, chained to a drafting board. A tension-breaking Mexican party in the animation department is recalled with the nostalgia of combat veterans given a week of R&R. Whatever happened, happened. The fact remains that those years were revolutionary, and if not for them, it's a good question whether Pixar, DreamWorks and the other animation production sources -- and Disney Animation itself -- would still exist. Credit is due.

Don Hahn was born in Chicago. He has been working at Walt Disney Studios for over thirty years and has produced many celebrated animated features, including Beauty and the Beast (91), The Lion King (94) and The Hunchback of Notre Dame (96). In addition to his 1999 bestseller Dancing Corndogs in the Night, he has written three books on the art of animation. Waking Sleeping Beauty (09) is his feature documentary debut.

By the mid-eighties, Walt Disney's fabled animation studios had fallen on hard times. The staff was polarized between newcomers hungry to innovate and old-timers who wouldn't relinquish control. These conditions had produced a series of box office flops and led to pessimistic forecasts. Maybe the best days of animation were over. Maybe the public didn't care. If you expected the situation to improve, you probably believed in fairy tales.

Waking Sleeping Beauty isn't a fairy tale but rather the true story of how Disney regained its magic with a staggering output of hits – Who Framed Roger Rabbit, The Little Mermaid, Beauty and the Beast, Aladdin, The Lion King and more – over a ten-year period.

Director Don Hahn and producer Peter Schneider bring an insider's knowledge to this comeback. They were among the young Turks at Disney who produced some of its biggest sensations. Hahn's documentary offers a fascinating perspective on what took place within the creative ranks as well as among the leadership team of Michael D. Eisner, Jeffrey Katzenberg and Roy Disney (the nephew of Walt). The process wasn't always pretty. Hahn (who still works for Disney) brings a refreshing candour to describing ego battles, cost overruns and failed experiments that others might prefer to forget. During times of tension, the animators' favourite form of attack was to draw nasty caricatures of their bosses. Hahn puts several memorable ones on display and marshals a vast array of interviews, home movies, internal memos and unseen footage. Anyone with an appetite for Hollywood gossip will relish this dish.

Animation lovers, in turn, will savour the rich history that gives credit where it's due to the many writers, artists and composers who created the Disney phenomenon. The documentary even includes key figures who famously left the company, such as Don Bluth, John Lasseter and Tim Burton. At one time, children imagined that Walt Disney's signature meant a film was the creation of one man. This is a more grown-up portrayal that reveals the collaborative experience in all its complexity.