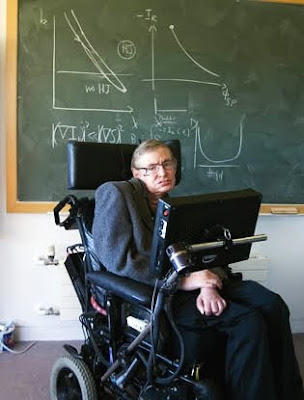 Texas A&M News & Information Services
Renowned physicist Stephen Hawking returns to Aggieland next month to present a rare public lecture, and officials in the Department of Physics and Astronomy at Texas A&M University encourage Brazos Valley residents and members of the campus community to take advantage of a major opportunity to experience one of the most brilliant scientific minds of all time.

Hawking, the world-renowned Cambridge University theoretical physicist famous for his theories on black holes and best-selling books about the universe, will detail more than 35 years of breakthrough research on black holes – which aren’t as black as previously thought – in his lecture, “Out of a Black Hole,” scheduled for 7 p.m. Monday (April 5) in Rudder Auditorium on the Texas A&M campus.

Hawking, widely considered to be the greatest scientific mind since Sir Isaac Newton and Albert Einstein, holds the Lucasian Professorship at Cambridge (the very professorship once held by Newton) and is the Sherman Fairchild Distinguished Scholar at the California Institute of Technology (Caltech). For the past 45 years he has been a world leader in research on black holes, the birth of the universe and the nature of space, time and gravity.

Hawking’s appearance at Texas A&M will mark his third in the past seven years. He initially visited the campus in March 2003 to help to inaugurate the George P. and Cynthia Woods Mitchell Institute for Fundamental Physics and Astronomy, established in 2002 with an endowment from the well-known Texas businessman and his wife, both of The Woodlands. He returned to Aggieland in 2007 to headline the department’s annual Physics Festival, selling out all 2,500 seats in Rudder Auditorium for his previous public lecture, “The Origin of the Universe.”

Dr. Christopher N. Pope, director of the Mitchell Institute and distinguished professor of physics who also holds the Stephen Hawking Chair in Fundamental Physics, completed his doctorate while studying under Hawking at Cambridge in the late 1970s and is considered one of his most successful students and closest collaborators.

“It has been a pleasure and an honor to have known Stephen for the last 35 years, and as always, I am looking forward to a lively and stimulating visit,” Pope says.

As part of Hawking’s visit, the department also plans to formally dedicate the Stephen W. Hawking Auditorium, located within the Mitchell Institute and named in his honor, in a by-invitation-only ceremony scheduled for earlier that afternoon.

Dr. Edward S. Fry, professor and head of the Department of Physics and Astronomy and holder of the George P. Mitchell ‘40 Chair in Experimental Physics, says he is especially pleased and excited to be welcoming Hawking back to Texas A&M.

“Professor Hawking has played an important role in some of the extraordinary successes of our department,” Fry explains. “As such, it is our great privilege to have him visit and to see our new facilities.”

All events are sponsored by the Mitchell Institute in conjunction with the Department of Physics and Astronomy and the Texas A&M College of Science.