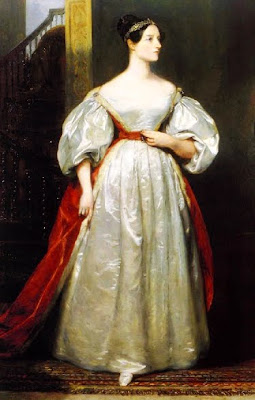 BBC News
Ada Lovelace has emerged as the most popular role model in a day dedicated to celebrating women working in the fields of science and technology.

So far, 2,239 people around the world have posted blogs, videos and podcasts online nominating their heroines.

Additionally, events were held in London, Copenhagen, Dresden, Montreal and Brazil to mark the day, named after Ada Lovelace, held on 24 March.

Ada Lovelace worked with mathematician Charles Babbage in the 1800s.

Ada Lovelace is therefore credited with writing the world's first computer program when she came up with a way of using the machine, which was never actually built, to calculate a mathematical sequence known as Bernoulli numbers.

"For years I've worked in technology, and every time you see a list of the top people in tech, it's dominated by men," said Suw Charman-Anderson, who created Ada Lovelace Day in 2009 and runs the annual event.

Ms Charman-Anderson invited people to nominate any woman in technology who had been a positive influence or inspiration - including teachers, parents and lecturers.

She chose broadcaster Maggie Philbin as her own role model, having watched her present BBC science programme Tomorrow's World during her teenage years.

"Here was a woman who looked very cool and talked about technology articulately - technology was second nature to her," she told BBC News.

"This was someone who understood what was going on and could communicate very clearly."

“ Having a role model is important, it means you don't question whether you can do something because you can see another woman doing it already ”
Suw Charman-Anderson

Ms Charman-Anderson was one of only two girls in her school year to study maths, physics and chemistry at A-level and now works as a social media consultant.

"Having a role model is important, it means you don't question whether you can do something because you can see another woman doing it already," she said.

Maggie Philbin told BBC News she was flattered by the nomination, although she had not considered herself to be a role model at the time.

"When I watched Tomorrow's World in the 60s and early 70s, it was just blokes. It was fabulous to watch, but at that stage I never imagined that it would have anything to do with me," she said.

"Look at the archives from the 60s - there are so many references to secretaries. That's what I, as a 10-year-old, was consuming."

Ms Philbin's interest in science was sparked because of an early, and unrealised, ambition to become a vet, she added.

She now credits social media such as Twitter for introducing her to inspirational women such as Ms Charman-Anderson and Dr Sue Black, who orchestrated a social media campaign to save World War II code-breaking centre Bletchley Park.

"These are my role models and technology heroines - they are using technology in a really ambitious and positive way. I'm learning a huge amount from them," she said.

Charles Babbage [Wikipdia]
Posted by Mercury at 5:32 AM

i only have men heroes....for a reason, accountability, reasoning, logical and cogent rational thought...

If you want Tim's address, just email me. :)