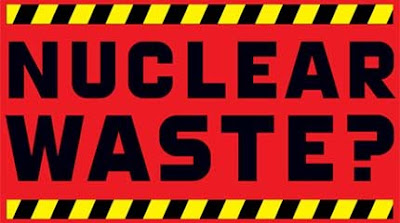 "Nuclear waste piles up, and it's costing taxpayers billions"

The Christian Science Monitor
In the waning days of the Bush administration, the US Department of Energy signed contracts with more than a dozen utilities promising to permanently store nuclear waste from 21 not-yet-built reactors, nuclear watchdog groups reported Wednesday.

But that "below the radar" DOE commitment was an unreasonable and unnecessary risk to taxpayers given the $1 billion dollars in contractual penalties the agency faced at the time – and the agency's 35-year failure to develop a permanent radioactive waste storage site, the groups said, citing federal contract documents they had obtained.

"It was rash for the Bush Administration to sign contracts for new reactors while taxpayers are on the hook for billions due to default on existing waste contracts," Arjun Makhijani, president of the Institute for Energy and Environmental Research (IEER), one of the watchdog groups, told reporters at a press conference Wednesday. "These new contracts are likely to add billions more in damages at a time when the federal government is struggling with deficit containment.”

The Department of Energy is more than a decade behind schedule in fulfilling its contractual obligations to remove and permanently dispose of highly radioactive spent fuel from the nation's 104 nuclear power reactors.

By 2020, taxpayers will have paid about $12 billion in court judgments against DOE for its failure to find a permanent storage site for highly radioactive spent nuclear fuel, the Congressional Budget Office estimated last year.

The contracts with nuclear power companies would require the government to begin collecting and storing waste no sooner than 2068, the groups reported. But even that seemingly distant date is unlikely to be enough time since by then there would be enough waste to fill more than two Yucca Mountains, the failed storage site that the Obama administration cancelled earlier this month. Some members of Congress are seeking to block the administration from defunding the project.

The Obama administration has signaled its support for expanding nuclear power by expanding federal loan guarantees. But much depends on the administration's new blue ribbon commission tasked with solving the long-term disposal of nuclear waste. The commission is meeting for the first time this week, but its first report is not expected for 18 months. Yet its task is made even more urgent by billions in pending court judgments now stacking up against US taxpayers, nuclear critics say.

"Given that after 35 years of searching, the U.S. has failed to license a single repository, it is reasonable to predict that the siting of two new repositories will take at least 50 years, if not 75 or 100 years," the groups said in their report. "Thus, there is a very real potential for defaults on the new irradiated nuclear fuel contracts signed in 2008-2009."

Reached by phone, a Department of Energy spokesman deferred comment until reviewing the group's report.

"I don't see how these contracts are any different than contracts entered into back in the 1980s – there was no used-fuel repository at that time either," says Steve Kerekes, a spokesman for the Nuclear Energy Institute, an industry group. "One could argue this is just the government continuing to take steps to honor its commitment."

Today nuclear power companies pay about $750 million annually in fees to cover the cost of disposing of nuclear waste, but must store it at their own sites. So far, they have paid more than $16 billion into a fund for long-term waste disposal services they haven't yet seen from the DOE, the CBO reported last year.

The contract documents show the US government will be required to begin taking possession of spent fuel from the new reactors 50 years after a new reactor begins operating, the groups estimated.

That might seem like plenty of time. Yet, the US has already tried unsuccessfully for 35 years to find just one site, says Kevin Kamps, a spokesman for Beyond Nuclear. The DOE knew, or should have known, it would be highly risky to commit itself to finding several storage sites in that time frame, he says.

"Fifty-three years into commercial nuclear power ... the US still has no safe, sound, permanent storage plan for high-level radioactive waste," he told reporters. Meanwhile, the spent fuel stacking up at the sites is a terrorist target, he and others said.
Posted by Mercury at 7:36 AM

and that is because you have lawyers looking instead of scientists....funny is it not Nevada chase after the federal buck....even a museum which blames every death from cancer on nuclear testing...and chides the dropping of the bomb on the Japanese....but forget to say that some of the U-235 was from a shipment from Germany to Japan and what for???.....uh...luminous dials on watches i suppose....or maybe X-ray machines for Korean Orphanages....bury the crap in New Jersey...i am sure Uncle Louie can arrange it