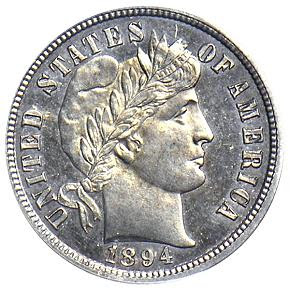 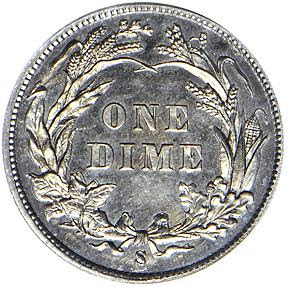 The extremely rare 1894-S dime is certainly worth more than the accumulated metals of silver [90%] and copper [10%] that weighs in at about +/- 2.5 grams. The last auction [December 2000] noted in The Numismatist fetched $431,250 [Eliasberg specimen]. It is situations like that put sparkle in the eyes of serious collectors and hopes of something equivalent for the dilettante numismatist [or general collector] and I am amazed at the offers constantly being aired on television and hyped by the likes of Montel Williams to buy silver and platinum U.S. coins and commemoratives. Let the buyer beware. One might be better off squirreling away a few unopened Chia Obamas.

CoinLink
The 1894-S Barber dime has been the subject of numerous comments, accounts, catalogue descriptions, and articles. In 2005 it was the subject of a book by Kevin Flynn, The 1894-S Dime: A Mystery Unraveled. Poignantly, the author noted, “The 1894-S dime is the rarest official business strike ever produced at a United States Mint.” The key phrase here is business strike, or circulation strike, referring to coins actually made for general commerce-and therefore not including, for example, the 1913 Liberty Head nickel and the 1804 silver dollar. Mint records state that only 24 were struck, but no documentation giving particulars as to the circumstances of manufacture or distribution of the pieces has ever surfaced. Thus, the 1894-S has been wreathed in mystery, always a good ingredient for numismatic interest, publicity, and desire for ownership. It is believed that only ten exist today. William A. Burd’s “The Inscrutable 1894-S Dime,” The Numismatist, February 1994, lists the known examples, two of which are well worn. This was a watershed study in the annals of this coin, as previously the population was estimated as being closer to a dozen, perhaps even 13 or 14. The Flynn text agrees and places the number at nine.

Reasons given for making just 24 1894-S dimes include “balancing the Mint books by clearing a $2.40 item” and “testing the dies.” Walter Breen’s Encyclopedia, 1988, p. 323 suggests that John Daggett, superintendent of the San Francisco Mint, struck the 24 pieces, all Proofs, as a favor for banker friends. Breen went on to comment:

“Each of eight persons received three; Daggett gave his three to his daughter Hallie, telling her to put them away until she was as old as he was, at which time she would be able to sell them for a good price. On the way home the child supposedly spent one for a dish of ice cream, but kept the other two until 1954, when she sold them to coin dealer Earl Parker.… “

The preceding and somewhat enchanting “ice cream story” cannot be verified. When Kevin Flynn set about learning the details, little of a factual nature was found.

When Augustus G. Heaton’s Mint Marks monograph was printed in 1893, the 1894-S, of course, was still in the future. In the March 1900 issue of The Numismatist, Heaton updated the work with an article, “Late Coinage of the United States Mint.” in which he noted this:

“The San Francisco Mint takes proudly to itself the sensation of later U.S. coinage in striking but $2.40 worth of dimes, or 24 pieces in all, in the year 1894. Of these, the writer possesses the only one known to the numismatic world. “

At the very least, this suggests that by very early 1900 Heaton was not aware of any examples in private collections and that the San Francisco Mint was proud of its accomplishment and related details to Heaton. However, by that time multiple pieces had changed hands. The Flynn text notes that chief coiner Charles Gorham sold two or three of these for $25 or more each in 1894. This was when numismatic interest in mintmarks was just beginning. One of the devotees of mintmarked coins was John M. Clapp, Pennsylvania oilman who was one of only a handful of collectors in 1894 who ordered coins directly from the branch mints (New Orleans and San Francisco). Perhaps he bought two from Gorham. It is known that Clapp’s order for 1894-S coins was handled by Acting Superintendent Robert Barnett, who said, “We have no dimes 1894.” However, the chief coiner did have some! In any event, by 1900, Clapp owned one, possibly two, 1894-S dimes, but his holdings were not disclosed to the numismatic community at the time.

In 1906 J.M. Clapp died, and his coins passed to his son, J.H. Clapp. In 1942 the Clapp Collection, then a part of the son’s estate, was acquired by Louis E. Eliasberg through Stack’s–one of the largest numismatic transactions up to that time. Eliasberg sold the duplicate coin through us in 1947. Heaton told no more in his 1900 article. Farran Zerbe, who at the turn of the century was just beginning to travel around the United States to visit mints and collectors, claimed to have much information on the 1894-S dime and also the mysterious 1873-S Liberty Seated dollar (no example of which is known today), but if he did, it was not committed to the printed page. Perhaps he knew about chief coiner Gorham.

As to the actual scenario, Kevin Flynn suggests that the odd number of 24 dimes was struck to balance accounts to make the production of this denomination “round out the total silver amount for the fiscal year 1894″ (which began on July 1, 1893 and ended on June 30, 1894). Q. David Bowers of our staff suggests that it may have been that 24 coins were produced to test the dies (an older theory), after which the numismatic value of these coins was realized, and no more were struck, the reason being given that there was no call in commerce for additional dimes. Historical evidence of mint employees making special coins for collectors or other oddities has been known for as long as coins have been struck, and the 1894-S Barber dime is just another example of this typical human behavior.

The publication of The 100 Greatest United States Coins by Jeff Garrett and Run Guth rated the 1894-S dime as the 6th most desirable coin ever struck by our mints—behind such treasures as the 1804 dollar, 1913 Liberty nickel, 1933 Saint-Gaudens double eagle, 1849 Coronet double eagle and the 1907 Ultra High Relief double eagle—rarified company indeed. Of course rarity alone does not make a coin desirable, it is the story that goes with the coin that greatly adds to the allure. The Hallie Daggett story is a large part of what makes the 1894-S dime not only desirable, but one of the most sought after treasures in American numismatics.

When working on the Louis E. Eliasberg collection the Clapp Family Notebook was examined (QDB) and the 1894-S coinage entries include the following. The turn-of-the-century entries by J.M. Clapp under the 1894-S dime in his notebook indicate that two specimens, both Uncirculated, were in the cabinet, and that at least one had been obtained from a San Francisco source, but not from the San Francisco Mint during the year of issue (for such direct purchases were noted separately at the time). These were the coins that later (1942) went to Louis E. Eliasberg.

Clapp notebook entries for other 1894-S coins reveal this:

“1894-S Barber 25¢: Obtained from the San Francisco Mint, November 1894, for face value. Variety with mintmark S above the letter D of DOLLAR on the reverse. (Another specimen with the S over the space between the R of QUARTER and the D of DOLLAR was acquired later from an unstated source).

“1894-S gold $20: Not ordered from the Mint. A lightly worn piece was acquired later, source not recorded, but probably through banking channels for face value.”

It seems from the preceding that the two Clapp 1894-S dimes did not come directly from the Mint to J.M. Clapp and, further, that when J.M. Clapp ordered silver coins from San Francisco, and same were supplied in November 1894, no dime was among them. Nor does it appear that any other numismatists obtained 1894-S dimes from the Mint at the time, or if they did, the coins were not publicized until years later. In 1900, Augustus G. Heaton, who was on the leading edge of mintmark research and who was recognized as the pre-eminent authority on the subject, believed he had the only one in numismatic hands. Heaton knew Clapp, lived in the same city (Washington, D.C.), and in 1901 nominated him for membership in the American Numismatic Association.

If J.M. Clapp had one or both of his 1894-S dimes by 1900 when Heaton published notice of them in The Numismatist, he did not inform Clapp of his holdings. This was not necessarily unusual then nor is it now. Today, many of the writer’s clients keep mum about their numismatic possessions.

The 1894-S dimes keep their secrets well, and only in the past few decades have collectors been able to ascertain much information about them. Like the beautiful lady behind the fan, perhaps more will be revealed in the future.

After 113 years it seems unlikely that more 1894-S dimes will turn up, but stranger things have happened. Who would have guessed that the S. S. Central America gold would ever be recovered and remain so pristine with such a wealth of history to be told? Much has been lost in the sweep of history, and much potentially remains to be discovered. Meanwhile the story of little Hallie Daggett walking home from visiting her father on a warm June day in San Francisco with three blazing white Proof 1894-S dimes in her purse and stopping by the soda fountain for a dish of ice cream is certainly one of intriguing tales to involve one of our greatest numismatic treasures.

The Registry of 1894-S Dimes needs to be corrected to include the present coin. In 1996 when Q. David Bowers wrote the lot description for the Eliasberg 1894-S dime for the joint sale between Stack’s and Bowers and Merena, one specimen had been delisted based on the research by William A. Burd as published in his article “The Inscrutable 1894-S Dime” in the February 1994 issue of The Numismatist. The present coin “could not be confirmed” as it had not been seen in over a decade by 1996, and the pedigree noted by the Kagin’s in the 1984 sale was incorrect, leading researchers to believe it was linked to another pedigree chain. Other references included from various published census information include those of David Lawrence in his The Complete Guide to Barber Dimes with updates from their Richmond Sale Part III, March 7, 2005, Lot 1295 and Kevin Flynn’s The 1894-S Dime: A Mystery Unraveled with references to tie together each of the known examples for the following roster:

Specimen No. 4. The Present Coin. Proof-64 Branch Mint (PCGS). Speck by I of UNITED, minor planchet flake touching denticles and field on rim near top of long leaf on upper right reverse. From the Dr. Samuel Joseph Gillespie Sale, Kagin’s Long Beach Auction, October 4-6, 1984, Lot 4176 and purchased privately by our consignor in January 1985 from Kagin’s. This coin is presumed to be the following although its earlier pedigree this could not be absolutely confirmed: Burd-unlisted, L-4, Breen-5, F-unlisted. Hallie Daggett, Earl Parker (1949-54), Dan Brown, Stack’s, Chicago Private Collector–likely to Kagin’s for auction at this point (circa 1984) in the pedigree chain if not well before as Kagin’s often inventoried such coins.