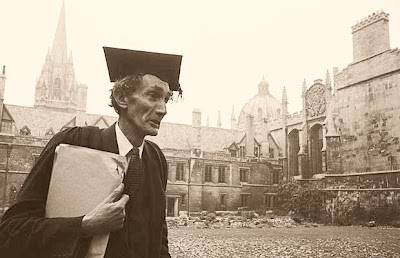 guardian.co.uk
The income of thousands of the most senior British academics has soared over the past decade, far outstripping growth in average lecturers' pay, according to a Guardian inquiry.

More than 80 university heads, generally known as vice-chancellors, now earn more than the prime minister, and some have seen their annual earnings double or even triple in 10 years. Some got 15% or 20% pay rises last year alone, compared with a 45.7% rise over 10 years for average higher education teaching professionals.

Salaries of more, sometimes much more, than £100,000 are paid to almost 4,000 other academic administrators, consultants and scientists in Britain's 150 university institutions, compared with only a handful at that level a decade ago.
David Leigh on survey showing top university pay is soaring Link to this audio

The Guardian has identified eight universities at the head of a league table based on a combination of chief executive pay and the proportion of high-earning staff.

The Guardian findings led the general secretary of the lecturers' union, UCU, Sally Hunt, to protest about "snouts in the trough".

She said: "The pay rises senior staff, in particular vice-chancellors, have enjoyed in recent years have been a constant source of ridicule. There is no transparency for the arbitrary rises they receive. Those at the top hide behind the clandestine world of remuneration committees as an excuse for their massive salaries."

Wes Streeting, president of the National Union of Students, said today: "The fact they are giving themselves and other managers huge pay rises will raise questions about whether students' money is being well spent."

At Oxford, where the income of the VC – currently Prof Andrew Hamilton – has more than tripled since 1999 to its present £327,000, a spokesman defended the rises because Oxford was "the number one university in the country" and the biggest research provider.

Oxford has the highest-paid university employee in the country: the fund manager Sandra Robertson is paid £580,000 to manage its billion-pound endowments.

Many universities defend their exploding top pay bills as a reflection of competition among universities, or "comparability" with other heads of big organisations. One small former technical college, Aston in Birmingham, however, refuses to explain the £309,000 package awarded to the engineering professor Julia King on the grounds that it "does not comment on the pay of any staff member".

By contrast, another vice-chancellor, Prof Eric Thomas at Bristol, decided to give some of the money back from his £309,000. The university said: "The VC took no pay rise last year, and made a donation to the university of £100,000.".

Nicola Dandridge, chief executive of Universities UK, which represents vice-chancellors, said todaythat universities were "highly complex businesses". "Salaries of university heads in the UK are comparable with those in competitor countries and are also in line with remuneration packages for directors and chief executives of public and private organisations of a similar size. As the role and importance of higher education have grown, so have the demands on the offices of vice-chancellors."
Posted by Mercury at 5:13 AM