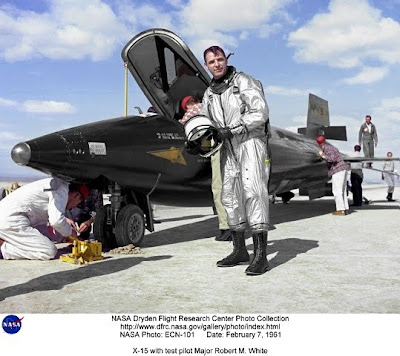 The New York Times
Robert M. White, who played an important role in the development of manned spaceflight as the first pilot to fly a winged craft into outer space, died Wednesday in Orlando, Fla. He was 85.

His death was announced by the National Aeronautics and Space Administration.

In the early 1960s, Major White, an Air Force pilot, was among those who pushed the envelopes of speed and altitude flying above the California desert out of Edwards Air Force Base, the fliers profiled by Tom Wolfe in “The Right Stuff.”

Major White was awarded the Collier Trophy for aviation from President John F. Kennedy, and he was recognized by the Air Force as a winged astronaut.

He never achieved the enduring celebrity status of the Mercury 7 astronauts or of Chuck Yeager, who broke the sound barrier in 1947, but he was the Air Force’s prime pilot for the X-15 program, which studied the effects of heat on aircraft surfaces at extremely high speeds and altitudes, and the physiological impact on fliers. Those X-15 flights helped propel NASA’s Mercury, Gemini and Apollo missions as well as the space shuttle program.

He was also the first flier to pilot a winged aircraft at four, five and then six times the speed of sound, exceeding that final milestone on Nov. 9, 1961, when he flew his X-15 at 4,093 miles an hour.

“He was the eternally correct and reserved Air Force blue-suiter,” Mr. Wolfe wrote in “The Right Stuff.”

“He didn’t drink. He exercised like a college athlete in training. He was an usher in the Roman Catholic chapel of the base and never, but never, missed Mass,” Mr. Wolfe wrote. “He was slender, black-haired, handsome, intelligent — even cultivated, if the truth were known. And he was terribly serious.”

Robert Michael White was born in New York City on July 6, 1924, and entered military service in 1942. He flew more than 50 fighter missions during World War II before he was shot down over Germany in February 1945 and taken prisoner.

After leaving military service in December 1945, he obtained a bachelor’s degree in electrical engineering from New York University. Re-called during the Korean War, he served with a fighter squadron based in Japan, and in the mid-1950s he was assigned to Edwards.

Returning to combat in the Vietnam War, he flew 70 missions over North Vietnam and received the Air Force Cross, the service’s highest award for valor after the Medal of Honor, for leading an August 1967 attack on an important railway and highway bridge in the Hanoi area. He retired from military service in 1981 as a major general.

General White is survived by his sons Greg, of Orlando, and Dennis, of Sarasota, Fla.; his daughters Pamela White, of Pelham, Ala., and Maureen McFillin, of Hoover, Ala.; his brother, Albert, of Eastchester, N.Y.; and four grandchildren. His wife, Chris, died before him.

After his flight into outer space, the major was featured on the cover of Life magazine next to the quote, “Boy, That Was a Ride.”

His persona, however, was unchanged.

“White had not unbent as much as one inch for the occasion,” Mr. Wolfe wrote. “You could see them straining to manufacture one of those ‘personality profiles’ about White, and all he would give them was the Blue Suit and a straight arrow. That was Bob White.”
Posted by Mercury at 6:04 AM