DVD Window for the film industry 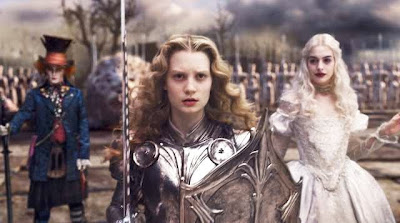 This has nothing to do with art but more with profits...just another method to make lots of money.

"Will 'Alice in Wonderland' start a DVD window revolution?"

Los Angeles Times
It's becoming increasingly clear that Disney's March 5 release of "Alice in Wonderland" may have helped trigger a dramatic tipping point in film history. The movie's 3-D ticket sales have been astounding, which has helped spur even more momentum for Hollywood's rush to turn nearly every movie imaginable into a 3-D release. The film provided a much-needed hit for Disney, even though the executives who put it into production--Dick Cook and Oren Aviv--weren't around to enjoy its success, having lost their jobs long before the film arrived in theaters.

But here's what will reserve "Alice" a place in the movie history books: It finally put the nail in the coffin of movie theater owners' mindlessly stubborn resistance to shorter DVD windows. For years, exhibitors have loudly complained that a shorter time frame between a film's release date and its arrival on DVD would basically be the end of the world as we know it, somehow encouraging untold millions of moviegoers to stay at home and wait for the DVD.

Though it was by accident, not design, "Alice" was the perfect test case to prove exhibitors wrong. After Disney announced it would bring the movie out on DVD within three months of its theatrical release (instead of the customary four-month window), exhibitors all across Europe threatened to keep the picture off their screens. U.S. exhibitors were equally unhappy, muttering darkly that the shortened window would put a crimp in the film's grosses.

Disney and the European exhibitors finally worked out a deal, preventing a boycott, but not until the controversy had received saturation media coverage around the globe, alerting even the most casual moviegoer that "Alice" would be arriving on DVD a month earlier than usual.

The result? "Alice" had the biggest non-sequel opening weekend of all time,grossing $116.1 million in the U.S., with its worldwide box office now standing at an impressive $366.2 million. So even though everyone in the world knew it was coming out 12 or so weeks later on DVD, they went to the theater anyway. As one studio chief said to me the other day, barely suppressing a chortle: "Case closed."

In truth, the case isn't exactly closed. But the weight of anecdotal evidence now clearly supports the studio's case. If a movie is good enough, people will come see it, no matter when it's due out on DVD. The bigger question is: What will the studios do next?

From the studio point of view, it simply doesn't make sense to wait 16 weeks or more to release a film on DVD when the average film does 80% of its business in its first three weeks in the theaters. Except for a phenomenon like "Avatar" or a mega-crowd pleaser like "The Hangover," most studio films have completely played out in six, or at most eight, weeks. So why not take better advantage of the millions of marketing dollars you've spent raising audience awareness in a film by moving up the DVD release far enough to essentially sell two tickets on the same ad campaign--one for the theatrical release and one for the DVD?

Despite an obvious consumer appetite to see movies at home sooner, we're still a long way away from the brave new world anticipated by digital idealists in which films would appear simultaneously in theaters as well as on video on demand (VOD), pay TV and DVD. So far, only Mark Cuban--who often bankrolls his own films and has a theater chain and HDTV network to play them--has tried anything resembling such a radical experiment. It had decidedly mixed results, since "Bubble," the highest-profile film to be released day and date, wasn't exactly the kind of movie that anyone but a few pencil-neck cinema geeks would bother to watch anyway.

It's telling that Disney was the studio that has most aggressively pursued the DVD window issue. Unlike the other major studios, which are still helmed by executives with a background in movies, Disney is run by Bob Iger and Rich Ross, whose formative years were spent in TV. Being TV guys, they are used to expecting quick results and are unaccustomed to the glacial pace of moviedom. They also have few emotional ties to the film business, so as they go about reinventing Disney as a media brand assembly line, they see their movies as media events, not just theatrical product, making them more likely to experiment with different release windows.

Disney's lack of loyalty to exhibitors has its price. With 3-D screens still in short supply, Disney is going to lose a lot of "Alice" playdates this weekend with the arrival of DreamWorks' "How to Train Your Dragon," even though "Alice" is still the top-grossing movie in the country. But figuring that "Dragon" audiences will fill up their 3-D screens, exhibitors can stick it to Disney for shortening their window on "Alice" by giving over a host of screens to "Dragon."

In other words, despite the kick-start from "Alice," the process of change in DVD windows is going to look a lot more like an evolution than a revolution. Disney's "Alice" move was a baby step, not a radical leap into the unknown, largely because the executives who run studios are still cautiously feeling their way forward, especially knowing that they are still beholden to theater owners who remain resistant to change. Digital technology, for example, has been around for years, but only now--with moviegoers happily paying a $3 premium to buy 3-D movie tickets--have exhibitors begun a speedy transition from 1940s-era film projection to video projection.

Hollywood is not a hotbed of idealism. Change is almost always spurred by economic incentives. In other words, money talks. Studios are only going to experiment with shorter DVD windows because they can get more bang for their marketing bucks and stave off piracy, since the longer you wait to put out a film on DVD, the more of its core audience will be watching unauthorized copies of it on the Web.

It's pretty easy to visualize the kind of bold experiment that should have happened by now. If you're releasing a film that's just a routine programmer, one that isn't reliant on special effects for its appeal (which people would feel the need to see on a big screen), why not try a day-and-date release, taking advantage of the millions of movie lovers who've put some big dough into their home entertainment centers. If you have a film like "Shutter Island," "Cop Out" or "The Bounty Hunter," that could just as easily be enjoyed at home as in the theaters, why not charge fans a premium--say $22.95--to see it at home on VOD at the same time as it plays in the theaters?

It makes total economic sense, instantly providing two different revenue streams that can take advantage of the same marketing campaign, while attracting a scrum of fans who wouldn't have gone to the trouble to see the film in a theater, but would be willing to pay a premium to see it in the comfort of their living rooms. This parallel form of movie distribution would've happened already if it wasn't for the resistance of exhibitors, who have long said they'd refuse to book any movie that is available anywhere else while it's opening in theaters. (That's why Summit could barely do a theatrical re-release of its Oscar-winning "The Hurt Locker"--theater owners wouldn't book a movie that had already been out on DVD.)

So why not make the exhibitors partners? If they are willing to risk a box-office shortfall, then promise them a cut of the VOD revenue. Or a better split from the theatrical take. After all, DreamWorks has already made Wal-Mart its merchandising partner for the release of "How to Train Your Dragon," giving Wal-Mart the exclusive on nearly all licensed "Dragon" products in return for the giant retailer making a huge promotional commitment to the film.

Why couldn't studios create a similar partnership with a theater chain, giving them an incentive to see if a day-and-date experiment could build a bigger audience for a new film without cannibalizing the theater's audience? It's something consumers would enthusiastically embrace, since they are already in the habit of consuming most of their favorite music and TV shows on a variety of media platforms. There's a lesson here, one that the movie business should have already learned from the collapse of the record industry. If you let your business model lag too far behind the habits of your most loyal consumers, you'll soon discover that you don't have a business anymore.
Posted by Mercury at 4:22 PM