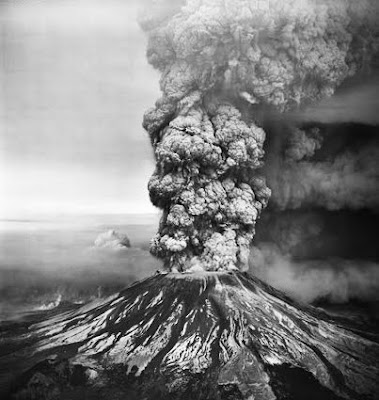 THE ERUPTION OF KRAKATOA
Before the year 1883 physical geographers, in speaking of the most disastrous volcanic eruption on record, referred first, in point of time, to the celebrated eruption of Vesuvius, in A.D. 79, when the cities of Herculaneum, Pompeii and several smaller towns on the slope of the mountain were destroyed by lava or buried under a mass of pumice stones and ashes; second to that of Hecla and Skaptar Jokull, contiguous mountains in Iceland, in 1783, when two enormous lava streams, one 15 miles wide and over 100 ft. deep and the other scarcely inferior, flowed, the first, 50 miles and the other 40, till they reached the sea, pouring a flood of white hot lava into the ocean, destroying everything in their paths and killing in the waters of the ocean the fish, the mainstay of the inhabitants, who were reduced by the disaster, directly or indirectly, to less than five-sixths of their former strength; and third to that of Galungung, in 1822, which devastated such an immense area in Java; but all the eruptions known besides were as mere child's play to the terrible one of Krakatoa in 1883.

If the reader will examine the map of the East Indies he will find represented in the straits of Sunda, which lie between Sumatra and Java, the little island of Krakatoa. In maps made before 1883 he will hunt in vain for the name, for like Bull Run before 1861, it was then unknown to fame, though navigators who passed through the straits knew it as a beautiful tropical isle, with an extinct volcanic cone in the center. In the beginning of 1883, however, the little well behaved island showed symptoms of wrath that boded no good to the larger islands in the vicinity. Noted for the fine fruits with which it abounded, it was a famous picnic ground for towns and cities even 100 miles away, and when the subterranean rumblings and mutterings of wrath became conspicuous the people of the capital of Java, Batavia, put a steamboat into requisition and visited the island in large numbers. For a time the island was constantly in a slight tremor, and the subterranean roar was like the continued but distant mutterings of thunder, but the crisis was reached August 23, at 10 o'clock A.M. It was a beautiful Sunday morning and the waters of the straits of Sunda were like that sea of glass, as clear as crystal, of which John in his apocalyptic vision speaks. The beauty that morning was enhanced by the extraordinary transparency of the tropical air, for distant mountain ranges seemed so near that it seemed possible to strike them with a stone cast from the hand. Only the mysterious rumblings and mutterings of the pent up forces beneath the island disturbed the breathless calm and silence that lay on nature-the calm before the terrible storm-the mightiest, the most awful on record! It burst forth! Sudden night snatched away day from the eyes of the terrified beholders on the mainland, but the vivid play of lightnings around the ascending column of dust penetrated even the deep obscurity to a distance of 80 miles. This awful darkness stretched within a circle whose diameter was 400 miles, while more or less darkness reigned within a circle with a diameter three times as great. Within this latter area dust fell like snow from the sky, breaking off limbs of trees by its weight miles distant, while in Batavia, 100 miles away from the scene of the disaster, it fell to the depth of several inches. The explosions were so loud as to be distinctly heard in Hindostan, 1,800 miles away, and at Batavia the sound was like the constant roar of cannon in a field of battle. Finally the whole island was blown to pieces, and now came the most awful contest of nature-a battle of death between Neptune and Vulcan; the sea poured down into the chasm millions of tons, only to be at first converted into vapor by the millions of tons of seething white hot lava beneath. Over the shores 30 miles away, waves over 100 ft. high rolled with such a fury that everything, even to a part of the bedrock, was swept away. Blocks of stone, of 50 tons weight were carried two miles inland. On the Sumatra side of the straits a large vessel was carried three miles inland. The wave, of course growing less in intensity, traveled across the whole Indian Ocean, 5,000 miles, to the Cape of Good Hope and around it into the Atlantic. The waves in the atmosphere traveled around the globe three times at the rate of 700 miles per hour. The dust from the volcano was carried up into the atmosphere fully twenty miles and the finest of it was distributed through the whole body of air. The reader doubtless remembers the beautiful reddish or purple glow at sunrise and sunset for fully six months after August, 1883-that glow was caused by volcanic dust in the atmosphere interfering with the passage of the sun's rays of the upper part of the solar spectrum, more manifest at sun rising and setting than at other times during the day, because at these periods the sun's rays have to travel obliquely through the atmosphere, and consequently penetrating a very deep layer, were deprived of all their colors except the red.

The loss of life was appalling. The last sight on earth to 35,000 people was that of the awful eruption. Engulfed in the ocean or covered with heaps of ashes, a few hours after the eruption commenced the awful work was done, and that vast multitude had vanished from off the face of the earth. The fact that in the neighborhood of the mountain there was a sparse population accounts for there not being even a far greater loss of life.

Notwithstanding the awfulness of volcanic and earthquake phenomena, there is some silver lining to the dark clouds. They prove that the earth is yet a living planet. Centuries must pass away before it will become like the moon-a dead planet-without water, air or life. Our satellite is a prophecy indeed of what the earth must eventually become when all its life forces, its internal energies, are dissipated into space.--Granville F. Foster, Min. Sci. Press.