Yesterday [2006] Pluto was declared a non-planet 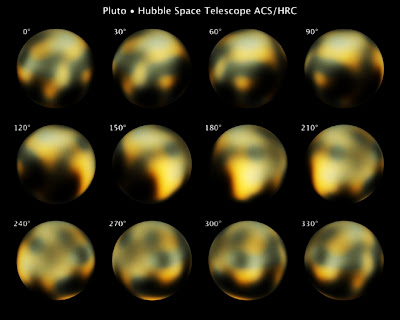 Wired
2006: Pluto, once the ninth planet from the sun, is downgraded to a mere “dwarf planet.” Our solar system loses a favorite kid brother and now has, officially, only eight planets.

Pluto was discovered by American astronomer Clyde Tombaugh on Feb. 18, 1930. Comparing photographs taken of the same section of sky over several nights in January, Tombaugh identified a moving object against a background of stationary stars.

Based on the predictions of two colleagues at the Lowell Observatory, he’d been searching for a planet outside the orbit of Neptune at the time. The photographs convinced him he had found it.

Tombaugh announced his discovery on March 13. The planet was officially named Pluto, after the Roman god of the underworld, on May 1, 1930.

But astronomers had trouble accepting Pluto as a full-fledged planet almost since its discovery. Size was always an issue — it’s smaller than Earth’s moon — and its orbit around the sun doesn’t conform to the path followed by the eight “classical” planets. Astronomers also began discovering similarly sized bodies in the vicinity of Pluto, diluting its cachet even more.

The IAU decided on this definition of a planet:

A celestial body that (a) is in orbit around the sun, (b) has sufficient mass for its self-gravity to overcome rigid body forces so that it assumes a hydrostatic equilibrium (nearly round) shape, and (c) has cleared the neighborhood around its orbit.
Because Pluto crosses the orbital path of Neptune, it has not cleared the neighborhood of its orbit, throwing it (and similarly Ceres, Eris, Haumea and Makemake) into the category of dwarf planet.

The International Astronomical Union decided on this definition of a dwarf planet:

A celestial body that (a) is in orbit around the sun, (b) has sufficient mass for its self-gravity to overcome rigid body forces so that it assumes a hydrostatic equilibrium (nearly round) shape, (c) has not cleared the neighborhood around its orbit, and (d) is not a satellite.
(It is important to keep the moons out of the definition because there are seven moons in our solar system bigger than Pluto: Io, Europa, Ganymede, Callisto, Titan, Triton and Earth’s own moon.)

So, Pluto is now merely a dwarf planet in the Kuiper belt — like it or not.
Posted by Mercury at 4:44 AM

Pluto is both a planet and a Kuiper Belt Object. The phrase "like it or not" conveys the message that the debate is over when this is not quite the case. The subject of what is a planet and whether Pluto counts as a planet continues to be debated in conferences, books, articles, etc. And I disagree about keeping moons out of the discussion. Dr. Alan Stern has proposed calling spherical moons of planets "satellite planets," as compositionally, they are very similar to planets except they orbit other planets instead of stars directly. Even Dr. Neil de Grasse Tyson has put a plaque in the Hayden Planetarium acknowledging the lack of consensus in the scientific community regarding the status of Pluto. Many astronomers do not believe our solar system has only eight planets and favor instead the description by Alan Boyle, author of "The Case for Pluto," describing our solar system as having "four plus four plus more" planets.

This has turned into a philosophical conundrum and will probably eclipse any scientific disclosure...Pluto is; Pluto isn't.

Despite the errant decision of the 450+ remaining IAU members, the whole issue begs to be resolved with new and professionally accepted definitions.

I think in time the focus will shift from a "poor Pluto" attitude to a more heuristic definition that can be acceptable to the scientific community and layperson.

I agree this begs to be resolved with a better set of definitions, and I am quite certain it will be--which is why I object to statements that convey the message that the issue is settled. One astronomer on an email list noted that it's okay to teach that sometimes, there isn't a clear right answer and wrong answer; rather, the answer depends on one's starting perspective.

The issue really isn't about Pluto; it's about finding a classification system that can incorporate the wide variety of new discoveries in this and other solar systems. The same schematic used for this solar system should be also applicable to and used for exoplanets. Since we are certain to discover more and more unusual exoplanets, any planet definition may likely require ongoing refinement. Also, such efforts should include not just all IAU members, but the many planetary scientists who do not belong to the IAU. With today's technology, that should not be too difficult.

"The issue really isn't about Pluto; it's about finding a classification system that can incorporate the wide variety of new discoveries in this and other solar systems."

It took a long time to get you to write that, but that is exactly correct. The fundamental axiom of all science is "definition". If agreement to the definition of terms is not made, then a resolution [understanding] cannot be made on specific phenomena. This is why religious arguments inevitably fail...definitions cannot be mutually satisfied.

And, as to the content of Wired's article, it was used to remind readers of the past event. Not all articles, even scholarly ones, are free from errors or unbiased. I sometimes offer a statement before the article...and, sometimes I don't to see if the reader can ferret out the errors and poor logic or even bias. That is what I did in this case. So far, you are the only responder and that did not disappoint me.

I suppose the ultimate philosophical question is...when this issue is settled and you are satisfied with the result[s], what will you champion next? :)