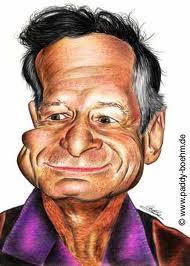 Hugh has been big news the past few months...the cultural icon is hanging on and maybe making a return?

Time
Gene Simmons, Kiss front man, gets the first quote: "Show me any guy, of any age, anywhere in the world, at any time in history, today or tomorrow, that wouldn't give his left nut to be Hugh Hefner." In theaters where Hugh Hefner: Playboy, Activist and Rebel is playing, do some hands instantly go up?

Without question, the founder and editor of Playboy magazine deserves respect for creating a brand whose bunny logo is nearly s familiar worldwide as the Disney mouse ears, for supporting liberal causes and helping to define America's sexual liberation. But many guys, of many ages, and especially today, would not be tempted to change places with the 84-year-old who publishes a money-losing magazine that he is battling to regain financial control of; who depends on Viagra to satisfy a platoon of bulbous-breasted women young enough to be his great-granddaughters; and who comes close to fitting the dictionary definition of Old Goat.

What about women — "girls," "ladies" or "gals," as the Playboy philosopher still calls them — do they admire Hefner? Brigitte Berman does. The Oscar-winning filmmaker, whose Artie Shaw: Time Is All You've Got tied with Down and Out in America for the best documentary of 1986, is less curious about the Playboy part of her movie's title than the Activist and Rebel aspects. Those words might also be synonyms, but Berman seems to mean the first to describe Hefner's liberal do-gooding, the second for his canny instincts in creating, selling and personifying his magazine's sybaritic viewpoint. (And, oh, how Berman loves the word activist. She bestows the honorific on actual political idealists like Pete Seeger and Jesse Jackson, but also on Barry Melton, the Bay Area attorney best known as lead guitarist for the '60s rock band Country Joe and the Fish, and Jenny McCarthy, the 1994 Playmate of the Year.)

"I was in a home in which I was not getting hugged," Hefner tells Berman about his strict Methodist upbringing. He's got plenty of hugs ever since, and Freudians might say he's been searching for a mother's physical affection in the arms and loins of his young ladies. But the Protestant work ethic, so deeply ingrained, never left him. Outfitted in his 24-hour pajamas and fueled by Dexedrine, he'd labor on his magazine for three days and nights nonstop. Born in the reign of Calvin Coolidge, silent movies and Prohibition, he escaped the strictures of that age to help create the tenor of his own time, then became its personification and possibly its prisoner. A divorced man in his early 30s with granite good looks; a tightly wrapped package of ambition and libido; a mid-century mover and shaker who emerged from anonymity: Hef so closely resembles Don Draper, the ad man of AMC's Mad Men, that one wants Jon Hamm to play him in a tell-all bio-pic.

This is not that movie. Though Berman includes critical comments on Hefner and Playboy by feminist Susan Brownmiller and singer (and Conservative Activist) Pat Boone, she apparently sees Hefner as the creator of an American phenomenon — the magazine, the TV shows, the Playboy Clubs and merchandise — that only incidentally exploited and objectified women. You can accept that position or challenge it, but it's a suitable position for a documentary. As an American male who grew up with Playboy, and wrote at length about the magazine on its 50th anniversary, I can't ignore its importance in shaping a generation of male tastes and attitudes. Berman's epic-length (2hr.4min.) documentary is the fullest attempt to justify Playboy's cultural significance, and Hefner's laudable career in censorship-busting and social philanthropy. All this lends an official, dispassionate tone to what one might have thought would be a sexy topic. Watching the film is like reading Playboy for the articles.

In her fascination with the man and his legacy, Berman lets him tell his story in an on-screen interview that consumes most of her film. Hef thus provides the narrative line and guarantees that the movie's view will be his; he is both the subject and, effectively, the painter of this portrait. He is certainly his own lifelong archivist. As a boy he began documenting his interests and achievements in thick scrapbooks and never stopped; he now has more than 2,000 volumes. For Berman he thumbs through his annals, fishing out a thesis he wrote as a student at Northwestern: "Sex Behavior in the U.S. Law," studying the wildly varied state proscriptions against several forms of lovemaking. It was Hef's extension of Alfred Kinsey's sex research, then just being published; Playboy would be, in a way, the Kinsey Reports illustrated.

At 27, with money scrounged from his Chicago friends, Hefner started a magazine, changing its name from Stag Party, with a stag mascot, to Playboy, with the bunny. It would also redefine the word playboy, from the image of an aging, upper-class dandy with his fly open to a youngish go-getter who worked hard and played hard. His first issue, dated December 1953, hit publicity gold: its "centerfold" — one of many Hef inspirations — opened up to reveal the Marilyn Monroe nude calendar, just as she was becoming the decade's definitive sex symbol. Playboy soon commissioned its own pinups, selling its readers on the notion of a Playmate as the girl next door — as if they had glanced out of their window and into hers, and she happened to be undressing, and instead of blushing or fuming she sunnily smiled back.

Mike Wallace, recalling an interview he did with Hef in the late '50s, says he told Hefner, "In five years you'll be doing something else." But the magazine kept growing: within five years it sold a million copies an issue, and 7 million by 1972. Along with the Party Jokes and the Playboy Adviser agony column it ran solid muckraking journalism, fiction by distinguished authors and the indispensible Playboy Interviews. All these accessories lent an elevated aspect to what Lenny Bruce (whose autobiography Hefner published) called "a stroke book." In the movie, Tony Bennett says of Playboy's readers: "When they got past masturbating, they sort of read more." Hefner put it more bluntly some years back during a Playmate reunion at his Holmby Hills mansion: "Without you gals, without the Playmates, I'd be the publisher of a literary magazine." And no one would be watching this documentary.

In every way, Hef designed Playboy as the girlie mag men didn't have to hide. It would be a lifestyle handbook celebrating the finest commodities: fine wines, sleek cars, cool jazz (but never, for the magazine's first couple of decades, that sleazy, uncool rock 'n roll) and luscious women. "Conspicuous consumption" was the phrase of the time, and Hefner merged the magazine's editorial and advertising content to promote his vision of utopian ownership. Get that summer house, that third car, a fourth woman — products as beautiful as they were interchangeable. The good life was something the Playboy reader could never have enough of.

Hef had more than most, though not more than he could handle. In the early'60s, he tells Berman, "I came out from behind the desk and literally reinvented myself, and started living the life I was espousing in the pages of the magazine, and became, in effect, Mr. Playboy." Hef, not the bunny, was the magazine's true logo. For a half-century he's been the ever-rutting (but rarely-breeding) rabbit, bedding as many as 11 of 12 Playmates in a year and, in his more long-term relationships, calling the sexual shots: he's polygamous, his girlfriends are monogamous. (One quiet period: Hef says, of his 1989 marriage to Playmate of the Year Kimberley Conrad, "For the better part of eight years, I was faithful to her the whole time.") When challenged in a Dick Cavett Show debate with Brownmiller to refute the accusation that Playboy treated women as sexual objects, he replied, "Women are sexual objects. If they weren't sexual objects, there wouldn't be another generation. That's what makes the world go 'round." Hef would say he's a lover of women more than of women's equality. He's not a feminist; he's a femininist.

The movie makes much of Hefner's liberal causes, beginning with racial integration. His syndicated TV show Playboy's Penthouse, which premiered in Oct. 1959, featured black performers mingling with the white party guests, while host Hef spoke to the camera as if it were a newcomer to the soiree; imagine The Ed Sullivan Show held in The Continental's apartment. A few years after opening the Playboy Clubs, a bar-restaurant showcase for musicians and comedians of both races, Hefner bought back the franchises in Miami and New Orleans because their owners segregated them. Jazz great Miles Davis was the subject of the first Playboy Interview, with the Q&A led by another African-American, Alex Haley, who also chatted up Martin Luther King, Jr., Malcolm X and Jim Brown. Yet the first black Playmate, Jennifer Jackson, didn't appear until Mar. 1965, Playboy's 136th issue.

Hefner's next TV venture, the 1969 Playboy After Dark, did let Country Joe McDonald sing the antiwar "I-Feel-Like-I'm-Fixin'-to-Die Rag" ("Well it's one, two, three, what are we fightin' for? Don't ask me, I don't give a damn / Next stop is Vietnam"). But the same year, Cavett, on a real network, ABC, hosted Jefferson Airplane's uncensored rendition of "We Can Be Together," with its call-to-arms chorus of "Up against the wall, motherf-----r." He established the Playboy Foundation, and donated use of his private jet, the Big Bunny, to fly Vietnamese orphans to their new homes in the States. He also fought for condom distribution and for the legalization of marijuana; who didn't, in the liberal establishment of the time? So Hefner surely participated in the revolution, but he wasn't its Mao or Che.

Nor does today's Hef wield anything like the old power he once had over young men's money and appetites. As you may have heard, the magazine business isn't what it was; but Playboy got hit early, not by the Internet but by home video, which provided naked ladies who moved and didn't have navel staples. The magazine's circulation is now about 2.6 million; and the company's stock, which was first offered in 1971 at $23.50, dropped by 90% (to $2.20) in late 2008 and closed last week at 5.41. Hefner is trying to take the company private, to pass it along to his two sons. His daughter Christie, who co-ran the business for two decades, has retired. Her sustained presence is missed in the documentary; she might have given it some gender balance.

But Berman is building a hero: her story doesn't need a strong woman, let alone a status for her protagonist that is diminished, bordering on irrelevancy. Hugh Hefner: Playboy, Activist and Rebel has the sheen of one of the magazine's loving profiles. In fact, considering that the subject's portrait is airbrushed to the point of idealized cartoonery, you could say that, in this movie, Hugh Hefner is his own centerfold.

Enter Hugh Hefner in the blog's search engine for more.
Posted by Mercury at 5:38 AM