The auspicious voyage has begun--Laura Dekker has set sail 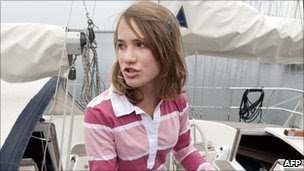 A Dutch teenager hoping to become the youngest solo around-the-world sailor has begun her voyage, her manager says.

Her manager said she had left in a very good mood despite calm conditions, but did not want to speak to the media.

In April Ms Dekker won a court case against Dutch social services, who had argued that the voyage could harm her emotional and social development.

The teenager will spend months living alone on the boat.

Media had gathered in Portimao, Portugal, at her scheduled departure time of 1200 GMT on Saturday, but there was no sign of Ms Dekker or her vessel.

Her manager, Peter Klarenbeek, said she had departed earlier in the day. Hours afterwards, the AFP news agency reported her representatives as saying she had sailed from the British enclave of Gibraltar.

"She left from the port of Gibraltar," said Marijke Schaaphok, whose company is handling Ms Dekker's media representation, saying she had spoken to Peter Klarenbeek.

The teenager left her home port of Den Osse in the Netherlands on 4 August, accompanied by her father Dick Dekker, and arrived in Portugal ten days later.

Ms Dekker will make more than 20 stops along her route, and has more than two years to complete the trip in order to break the existing record.

If she returns before she turns 17 in September 2012 she will seize the record, set in May this year by 16 year-old Australian Jessica Watson.

Her first port of call is expected to be either in the Canary Islands or Madeira.

The director of Dutch media firm Masmedia, Marijke Schaaphok, whose company will film the voyage via remote cameras aboard Guppy, told Associated Press she had no concerns about Ms Dekker's wellbeing.

"She grew up with her father on a boat so she's completely different from a normal 14-year-old girl.

"She's very wise and a little bit impatient, but she's a very nice girl and she knows exactly what she wants."

"Laura has salt in her veins", he told the AFP agency.

Earlier this month Ms Dekker told reporters before leaving Den Osse: "I am not really afraid." Asked what she would miss most, she replied: "Spot", referring to her dog.

Ms Dekker had been under state supervision since October 2009 after a court in Utrecht placed a guardianship order, citing fears for her social and emotional development.

But the order was lifted in July by a court in Middelburg.

Her mother had expressed concerns about the solo voyage, but has since lifted her objections.

Ms Dekker was born on a yacht off the coast of New Zealand during a seven-year world trip.