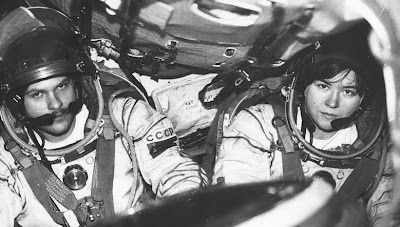 A regimen of calisthenics will not resolve the loss of an astronaut's muscle mass. Another reason to keep man from long term space travel for now.

Astronaut muscles waste away on long space flights reducing their capacity for physical work by more than 40%, according to research published online in the Journal of Physiology.

PhysOrg.com
This is the equivalent of a 30- to 50-year-old crew member's muscles deteriorating to that of an 80-year-old. The destructive effects of extended weightlessness to skeletal muscle - despite in-flight exercise - pose a significant safety risk for future manned missions to Mars and elsewhere in the Universe.

An American study, led by Robert Fitts of Marquette University (Milwaukee, Wisconsin), was recently published online by The Journal of Physiology and will be in the September printed issue. It comes at a time of renewed interest in Mars and increased evidence of early life on the planet. NASA currently estimates it would take a crew 10 months to reach Mars, with a 1 year stay, or a total mission of approximately 3 years.

Fitts, Chair and Professor of Biological Sciences at Marquette, believes if astronauts were to travel to Mars today their ability to perform work would be compromised and, with the most affected muscles such as the calf, the decline could approach 50%. Crew members would fatigue more rapidly and have difficulty performing even routine work in a space suit. Even more dangerous would be their return to Earth, where they'd be physically incapable of evacuating quickly in case of an emergency landing.

The study - the first cellular analysis of the effects of long duration space flight on human muscle - took calf biopsies of nine astronauts and cosmonauts before and immediately following 180 days on the International Space Station (ISS). The findings show substantial loss of fibre mass, force and power in this muscle group. Unfortunately starting the journey in better physical condition did not help. Ironically, one of the study's findings was that crew members who began with the biggest muscles also showed the greatest decline.

The results highlight the need to design and test more effective exercise countermeasures on the ISS before embarking on distant space journeys. New exercise programmes will need to employ high resistance and a wide variety of motion to mimic the range occurring in Earth's atmosphere.

Fitts doesn't feel scientists should give up on extended space travel. 'Manned missions to Mars represent the next frontier, as the Western Hemisphere of our planet was 800 years ago,' says Fitts. 'Without exploration we will stagnate and fail to advance our understanding of the Universe.'

In the shorter term, Fitts believes efforts should be on fully utilizing the International Space Station so that better methods to protect muscle and bone can be developed. 'NASA and ESA need to develop a vehicle to replace the shuttle so that at least six crew members can stay on the ISS for 6-9 months,' recommends Fitts. 'Ideally, the vehicle should be able to dock at the ISS for the duration of the mission so that, in an emergency, all crew could evacuate the station.'
Posted by Mercury at 6:19 AM