For profit colleges and loan defauts 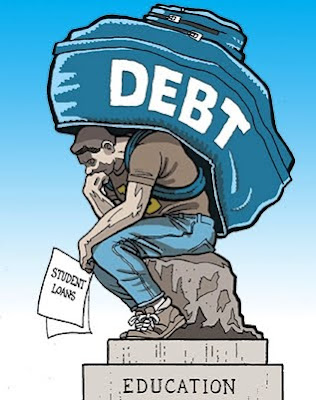 USA TODAY
When for-profit universities started popping up in the 1990s, they seemed like such a good idea. They would attract money needed to meet surging demand for higher education. They would be innovative and nimble. And perhaps they would even force change at America's non-profit colleges and universities, where costs have soared.

The reality, however, has not been so impressive. For-profit universities have succeeded in harvesting billions of dollars annually in federal student aid. Many are also quite adept at paying huge executive salaries and lobbying to keep the taxpayer money flowing. But sky-high loan default rates among students at these schools suggest that they are not delivering on their promise to efficiently produce the kind of skilled workers that America so desperately needs. The Obama administration is right to flag the problem, though its response seems feeble.

According to the Department of Education, 77% of for-profit universities' revenue — some $24 billion in the 2008-09 academic year — comes from federal grants and loans. Amazingly, even though the industry accounts for only 10% of students, it is responsible for 44% of all loan defaults. On average, more than one in five people who borrow to attend for-profit institutions is in default within three years of leaving school. The schools don't care because the loans are federally guaranteed — an echo of the practices that led banks to issue subprime mortgages.

The Chronicle of Higher Education found six institutions with default rates greater than 40%. They are mostly small schools such as Angley College of Deland, Fla., and the College America at Flagstaff (Ariz.). But in 2004, the Bush administration criticized the nation's largest for-profit school, the University of Phoenix, for its aggressive tactics to increase enrollment. The company settled the case for $10 million.

This default rate is a clear signal that something is terribly wrong for the students at these institutions. Either they aren't getting the education they need, or they are being charged too much — or perhaps both.

The Obama administration's new rules would require most schools to warn prospective students that the programs they are considering might not lead to salaries sufficient to pay off their loans, a message quite different from the heavy-sell marketing techniques currently in use. The most egregiously underperforming schools would be cut off from federal student aid.

These measures are too accommodating. Institutions could continue benefiting from federal funds if as few as 45% of their former students are paying down their loans. The proposition that government should be lending money for any purpose with the expectation that less than half of it will be paid back on time — or at all — is patently absurd. From the perspective of the taxpayers, this is the very definition of waste.

From the perspective of the schools, it is less a business model than a scam. But in today's business and political culture, industries see it as a right to tap into government largesse. Whenever government leaders try to get more return for the taxpayers, they whine about excessive regulation.

The fact is that some for-profit institutions are a bad deal. The average one charged about $14,000 in tuition in 2009, according the Senate Committee on Health, Education, Labor and Pensions. The average community college charged $2,500. The average four-year public university charged $7,000 annually for in-state students.

It's hard to see why taxpayers should lose money sending students to overpriced schools. It's time that such institutions receive the failing grades they deserve.

Use the search engine for many more posts on this subject.
Posted by Mercury at 8:26 AM

take the government out of it....