Nothing new...just more anger from the populace 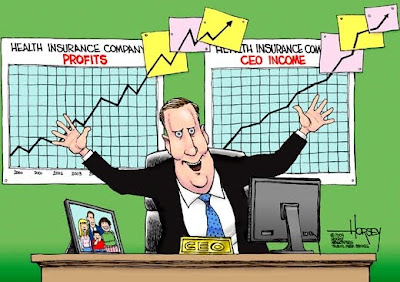 Leaders of Cigna, Humana, UnitedHealth, WellPoint and Aetna received nearly $200 million in compensation in 2009, according to a report, while the companies sought rate increases as high as 39%.

Los Angeles Times
The top executives at the nation's five largest for-profit health insurance companies pulled in nearly $200 million in compensation last year — while their businesses prepared to hit ratepayers with double-digit premium increases, according to a new analysis conducted by healthcare activists.

The leaders of Cigna Corp., Humana Inc., UnitedHealth Group and WellPoint Inc. each in effect received raises in 2009, the report concluded, based on an analysis of company reports filed with the Security and Exchange Commission.

H. Edward Hanway, former chief executive of Philadelphia-based Cigna, topped the list of high-paid executives, thanks to a retirement package worth $110.9 million. Cigna paid Hanway and his successor, David Cordani, a total of $136.3 million last year.

Only one executive in the list actually saw his paycheck shrink last year: Ron Williams, the CEO of Hartford, Conn.-based Aetna Inc., earned nearly $18.2 million in total compensation, down from $24.4 million in 2008.

"Most families are struggling to hang on. Employers are struggling to stay in business. And these guys were giving themselves huge raises," said Ethan Rome, executive director of Health Care for America Now, a coalition of advocacy groups that prepared the report.

A spokeswoman for WellPoint said executives' compensation reflects their effort to improve care and hit corporate goals. Representatives of the other four insurers either declined to comment Tuesday on the report or did not respond to questions.

The executive packages were calculated by adding base salaries, bonuses, stock awards and other compensation reported on company financial statements. It did not include the value of exercised stock options.

Last year was highly profitable for most of the country's big publicly traded insurers. In the first two quarters of this year, profits for many insurers have continued to soar more than 20%.

Aetna's net income jumped more than 40% in the second quarter of 2010 compared with a year earlier. Indianapolis-based WellPoint recorded a 51% increase in its profit in the first quarter compared with the same period in 2009.

At the same time, the companies have sought major premium hikes. In Rhode Island, UnitedHealth of Minnetonka, Minn., this spring sought increases of up to 15.5%. In Utah, some customers of Humana of Louisville, Ky., reported increases of 29%.

In California, WellPoint subsidiary Anthem Blue Cross planned increases as high as 39% earlier this year. (The company later scaled them back, acknowledging errors in its rate-setting).

Industry officials have said the rate hikes are necessary because of rising medical costs, but insurance companies have faced added scrutiny as executive pay grows. After UnitedHealth CEO Stephen Hemsley cashed in nearly $99 million worth of stock options last year, a group of shareholders launched a bid to expand shareholder input on executive pay.

"It creates a culture of over-compensation," said Lance E. Lindblom, president of the Nathan Cummings Foundation, which led the ultimately unsuccessful effort to increase oversight at UnitedHealth. "That takes eyes off the ball of performance."
Posted by Mercury at 5:56 AM