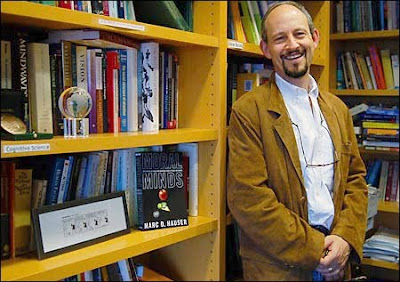 Hours later, Dr. Hauser, a rising star for his explorations into cognition and morality, made his first public statement since news of the inquiry emerged last week, telling The New York Times, “I acknowledge that I made some significant mistakes” and saying he was “deeply sorry for the problems this case had caused to my students, my colleagues and my university.”

Dr. Hauser is a leader in the field of animal and human cognition, and in 2006 wrote a well-received book, “Moral Minds: How Nature Designed Our Universal Sense of Right and Wrong.” Harvard’s findings against him, if sustained, may cast a shadow over the broad field of scientific research that depended on the particular research technique often used in his experiments.

Harvard itself had faced growing criticism for not releasing more details of the inquiry since The Boston Globe reported on Aug. 10 that the university had found evidence of scientific misconduct in Dr. Hauser’s lab. On Friday, Michael D. Smith, dean of the Harvard faculty of arts and sciences, issued a letter to the faculty confirming the inquiry and saying the eight instances of scientific misconduct involved problems of “data acquisition, data analysis, data retention, and the reporting of research methodologies and results.” No further details were given.

The dean’s letter said that the United States attorney’s office for the District of Massachusetts had begun an inquiry and that Harvard was cooperating. Because some of the experiments involved federal money, inquiries are also being conducted by the Office of Research Integrity in the Department of Health and Human Services and the Office of Inspector General for the National Science Foundation.

A Harvard spokesman, Jeff Neal, said in an e-mail, “We were informed last week that the U.S. Attorney is looking into this issue.”

Citing those inquiries and Harvard’s rules, Dr. Smith said the report by the Standing Committee on Professional Conduct would remain confidential. But he also promised to convene a faculty panel to review Harvard’s policies for investigating misconduct cases.

According to the letter, three of the misconduct problems occurred in published articles and the rest were found and corrected before publication.

The sanctions to be imposed on Dr. Hauser are confidential, but could include involuntary leave, extra oversight, and restrictions on the ability to apply for grants and supervise students, Dr. Smith said.

The university said in a statement last week that Dr. Hauser or a co-author had been directed to correct three published papers for which the original data could not be found. But in two of the challenged papers, Dr. Hauser redid the experiments and obtained the same results as published. In one of the journals, his information was titled an “addendum,” not a correction. The other journal, Science, has not yet decided how to handle the issue.

Dr. Hauser presumably tried to repeat the third experiment as well but if so, he apparently failed to do so. He wrote this month to the editor of Cognition, the journal in which it was published, saying he was retracting the paper, but gave no reason for doing so.

In his statement, Dr. Hauser, who is on a year-long leave, said: “I acknowledge that I made some significant mistakes and I am deeply disappointed that this has led to a retraction and two corrections. I also feel terrible about the concerns regarding the other five cases, which involved either unpublished work or studies in which the record was corrected before submission for publication.”

He said he hoped that the scientific community would wait for the federal investigative agencies to make their final conclusions. He added, “I have learned a great deal from this process and have made many changes in my own approach to research and in my lab’s research practices.”

There is a wide spectrum of scientific sins, ranging from wrist-slap offenses like bad data storage at one end, to data fabrication at the other. It is still not clear where on this spectrum Dr. Hauser’s errors may fall. He has admitted only to unspecified "mistakes," not to misconduct.

Many of his experiments involved inferring a monkey’s thoughts or expectations from its response to a sight or sound. But the technique required somewhat subjective assessments by the researcher as to whether the monkey stared longer than usual at a display or turned its head toward a loudspeaker broadcasting an unexpected sound.

At least some of Dr. Hauser’s students disagreed with his interpretation of one such experiment three years ago, and reported their reservations to the Harvard authorities in a letter that was obtained this week by The Chronicle of Higher Education. It was this letter that spurred a three-year investigation of Dr. Hauser’s work going back at least as far as 2002.

In view of Dr. Hauser’s prolific output, the finding of missing data in just three experiments, two of which he was able to repeat with the same results, is perhaps not greatly surprising. Scientists trying to assess Dr. Hauser’s work are likely to attach considerable weight to the exact nature of the problems Dr. Smith says were found by the faculty committee. But separately from the Harvard inquiry, Dr. Hauser already had several critics in the scientific community who felt some of his published results were incorrect or unconvincing.

For his part, Dr. Hauser said that after he finishes taking some time off, he looked forward to returning to work, “mindful of what I have learned in this case.” He said, “Research and teaching are my passion.”


Harvard scientist run amuck?
Posted by Mercury at 4:58 AM