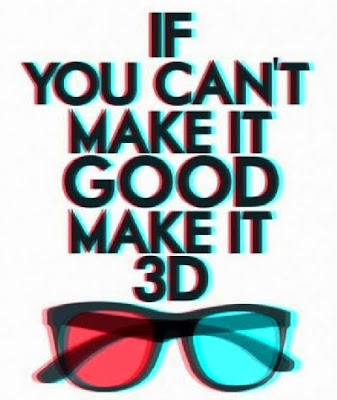 "Some Directors Say 3-D Is One Dimension Too Many"

The New York Times
A joke making the rounds online involves a pair of red and green glasses and some blurry letters that say, “If you can’t make it good, make it 3-D.”

The fans of flat film have a motto. But do they have a movement?

While Hollywood rushes dozens of 3-D movies to the screen — nearly 60 are planned in the next two years, including “Saw VII” and “Mars Needs Moms!” — a rebellion among some filmmakers and viewers has been complicating the industry’s jump into the third dimension.

It’s hard to measure the audience resistance — online complaints don’t mean much when crowds are paying the premium 3-D prices. But filmmakers are another matter, and their attitudes may tell whether Hollywood’s 3-D leap is about to hit a wall.

“When you put the glasses on, everything gets dim,” said J. J. Abrams, whose two-dimensional “Star Trek” earned $385 million at the worldwide box office for Paramount Pictures last year.

Joss Whedon, who was onstage with Mr. Abrams, said that as a viewer, “I’m totally into it. I love it.” But Mr. Whedon then said he flatly opposed a plan by Metro-Goldwyn-Mayer to convert “The Cabin in the Woods,” a horror film he produced but that has not yet been released, into 3-D. “What we’re hoping to do,” Mr. Whedon said, “is to be the only horror movie coming out that is not in 3-D.”

A spokesman for MGM declined to discuss “The Cabin in the Woods.” But one person who was briefed on the situation — and spoke on the condition of anonymity because the studio was in the middle of a difficult financial restructuring — said conversion remained an option.

Meanwhile, a spokesman for Marvel Entertainment said that studio had not decided on two or three dimensions for “Avengers,” a superhero film Mr. Whedon is directing.

With the enormous 3-D success of “Avatar,” directed by James Cameron, followed in short order by “Alice in Wonderland,” by Tim Burton, film marketing and distribution executives have been clamoring for more digitally equipped theaters to keep 3-D movies from crowding one another off the screen.

By year’s end, there will be more than 5,000 digital screens in the United States, or 12.5 percent of the roughly 40,000 total, easing a traffic jam that has caused 3-D hits like “Clash of the Titans,” from Warner Brothers, to bump into “How to Train Your Dragon,” from DreamWorks Animation, to the disadvantage of both.

Tickets for 3-D films carry a $3 to $5 premium, and industry executives roughly estimate that 3-D pictures average an extra 20 percent at the box office. Home sales for 3-D hits like “Avatar” and “Monsters vs. Aliens” have been strong, showing they can more than hold their own when not in 3-D.

A 3-D movie can be somewhat more costly than a 2-D equivalent because it may require more elaborate cameras and shooting techniques or an additional process in the already lengthy postproduction period for effects-heavy films. But the added costs are a blip when weighed against higher ticket sales.

Behind the scenes, however, filmmakers have begun to resist production executives eager for 3-D sales. For reasons both aesthetic and practical, some directors often do not want to convert a film to 3-D or go to the trouble and expense of shooting with 3-D cameras, which are still relatively untested on big movies with complex stunts and locations.

Filmmakers like Mr. Whedon and Mr. Abrams argue that 3-D technology does little to enhance a cinematic story, while adding a lot of bother. “It hasn’t changed anything, except it’s going to make it harder to shoot,” Mr. Whedon said at Comic-Con.

In much the same spirit, Christopher Nolan recently warded off suggestions that his film “Inception,” from Warner — still No. 1 at the box office — might be converted to 3-D.

On the other hand, Michael Bay, who is shooting “Transformers 3,” appears to have agreed that his film will be at least partly in 3-D after insisting for months that the technology was not quite ready for his brand of action.

“We’ve always said it’s all about balance,” said Greg Foster, the president and chairman of Imax Filmed Entertainment, which has long counseled that some films are better in 2-D, even on giant Imax screens. “The world is catching up to that approach.”

A willingness to shoot in 3-D could persuade studio committees to approve an expensive film. But the disdain of some filmmakers for 3-D — at least in connection with their current projects — was on full display in San Diego.

Jon Favreau, speaking at Comic-Con about his coming “Cowboys & Aliens” for DreamWorks and Universal, said the idea of doing the movie in 3-D had come up, but he was not interested. Contemporary 3-D requires a digital camera, and “Westerns should only be shot on film,” Mr. Favreau said. He added: “Use the money you save to see it twice.”

Stacey Snider, the DreamWorks chief executive, said Mr. Favreau and the studios involved had mutually agreed that 3-D was not right for the film. But, she added, a discussion about 3-D was inevitable.

“It’s naïve to think we wouldn’t be having it on any movie that has effects, action or scale,” Ms. Snider said.

Earlier at Comic-Con, Edgar Wright, the director of “Scott Pilgrim vs. the World,” an action-filled comic-book extravaganza from Universal, similarly said that his film would arrive in two dimensions, at regular prices.

(People briefed on Universal’s approach to the film said 3-D had been considered very briefly. It was rejected, however, partly to avoid straining what promises to be a young audience with high ticket prices, partly because the already busy look of the movie might have become overwhelming in 3-D.)

The crowds cheered, as they had in an earlier Comic-Con briefing by Chris Pirrotta and other staff members of the fan site TheOneRing.net, who assured 300 listeners that a pair of planned “Hobbit” films will not be in 3-D, based on the site’s extensive reporting.

But in Hollywood, an executive briefed on the matter — who spoke on the condition of anonymity because of the delicate negotiations surrounding a plan to have Peter Jackson direct the “Hobbit” films — said the dimensional status of the movie remained unresolved.

Asked by phone recently whether die-hard fans would tolerate a 3-D Middle Earth, Mr. Pirrotta said, “I do believe so, as long as there was the standard version as well.”

In his own family, he said, the funny glasses can be a deal-breaker.