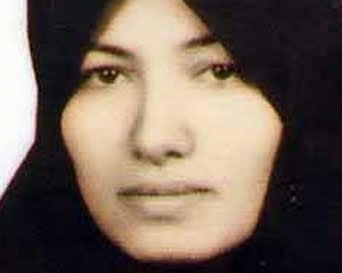 If the following is true, I suppose Sakineh Mohammadi Ashtiani will be hanging from a rope soon executed not on adultery charges but on a more serious accusation...conspiracy in murder. The BBC posted a televised video of her confession. Mina Ahadi [Iran Committee against Stoning (ICAS)] declared... "It's not the first time Iran has put an innocent victim on a televised programme and killed them on the basis of their forced confessions – it has happened numerously in the first decade of the Islamic Revolution." And reported that "Her lawyer told the Guardian last night that his client, a 43-year-old mother of two, was tortured for two days before the interview was recorded in Tabriz prison, where she has been held for the past four years." Nothing like some electric wires attached to nipples, genitals, or deprivation of food, water, sunlight to get a false statement.

BBC
Iranian state TV has aired what it says is a confession by a woman under threat of being stoned to death for adultery.

In the interview shown on Wednesday, Sakineh Mohammadi Ashtiani purportedly admits conspiring to murder her husband in 2005 and denounces her lawyer.

After an international outcry, Iranian officials temporarily halted her stoning sentence last month, but there are fears she will now be hanged.

The 43-year-old had said she was forced to confess to the charges of adultery.

In May 2006, a criminal court in East Azerbaijan province found Ms Ashtiani guilty of having had an "illicit relationship" with two men following the death of her husband. She was given 99 lashes.

But that September, during the trial of a man accused of murdering her husband, another court reopened an adultery case based on events that allegedly took place before her husband died.

Despite retracting a confession she said she had been forced to make under duress, Ms Ashtiani was convicted of "adultery while being married" and sentenced to death by stoning.
Murder case

The mother-of-two's alleged confession to complicity in her husband's murder, which was made in Azeri and dubbed into Persian, was aired on one of the main state-run television channels.

There was no mention of the stoning sentence and the focus of the interview was moved away from the allegation of adultery.

The woman, whose face was pixelated, admitted her part in the 2005 killing, despite Ms Ashtiani having earlier told Western media that she had been acquitted of the charge.

She said her husband's cousin had told her he wanted to kill her husband, but that she had assumed this was a joke.

"Later I realised that he was a killer," the woman said.

One day the man had come to her house "with all the required equipment," she added.

"He had brought electric devices, wire and gloves. He then killed my husband by electrocuting him. He asked me before to send my children to their grandmother's house."

"Why has he taken my case to the TV? Why has he disgraced me?"

Another of Ms Ashtiani's lawyers has said that she was tortured for two days in prison to force her to make her televised confession on Wednesday.

Ms Ashtiani had said she was forced to confess to the charges of adultery.

Human rights activists fear that she is now in danger of imminent execution.

The BBC's Tehran correspondent, Jon Leyne, says the Iranian authorities are clearly trying to move the focus away from the adultery charge and the stoning sentence, and to brand Ms Ashtiani a murderer.

The airing of the TV confession is a sign that she could soon be executed, probably by hanging, our correspondent says.

It seems the Iranian officials are sending a tough message to Western media and human rights groups that if they interfere in Iranian affairs and cause embarrassment, it will be counter-productive, he adds.

The Guardian
The Iranian woman whose sentence to death by stoning sparked an international outcry is feared to be facing imminent execution, after she was put on a state-run TV programme last night where she confessed to adultery and involvement in a murder.

Speaking shakily in her native Azeri language, which could be heard through a voiceover, Sakineh Mohammadi Ashtiani told an interviewer that she was an accomplice to the murder of her husband and that she had an extramarital relationship with her husband's cousin. Her lawyer told the Guardian last night that his client, a 43-year-old mother of two, was tortured for two days before the interview was recorded in Tabriz prison, where she has been held for the past four years.

"She was severely beaten up and tortured until she accepted to appear in front of camera. Her 22-year-old son, Sajad and her 17-year-old daughter Saeedeh are completely traumatised by watching this programme," said Houtan Kian.

He added that there were now fears that the Iranian authorities would act quickly to carry out the death sentence, which was reportedly commuted to hanging after an international outcry last month. The sentence was initially for "having an illicit relationship outside marriage" but some Iranian officials have claimed she was also found guilty of murdering her husband and should still face death by stoning.

The interview was broadcast on a show called 20:30, a day after US Secretary of State Hillary Clinton urged Tehran to honour treaty obligations to respect the rights of citizens and halt executions.

Observers suggested one of the signs she was speaking under duress was that in the interview she blamed the western media for interfering in her personal life.

In an interview last week with the Guardian through an intermediary, Mohammadi Ashtiani accused the Iranian authorities of lying about the charges against her to confuse the media in order to pave the way to execute her in secret. "I was found guilty of adultery and was acquitted of murder," she said.

Amnesty International condemned the "so-called" confession and said the independence of Iran's judiciary was "tattered" by the broadcast. "This makes a complete mockery of the judiciary system in Iran," said Drewery Dyke of Amnesty's Iran team. "Iran is inventing crimes ... it is an unacceptable practice that flies in the face of justice."

Mina Ahadi of the Iran Committee against Stoning (ICAS) said: "It's not the first time Iran has put an innocent victim on a televised programme and killed them on the basis of their forced confessions – it has happened numerously in the first decade of the Islamic Revolution."

[It is interesting to note that the majority of information and editorials are coming from foreign sources...very little coverage from the United States.]
Posted by Mercury at 5:48 AM