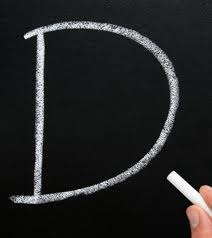 "Little as They Try, Students Can’t Get a D Here"

The New York Times
Who wants to pay for “D”-quality plumbing? Fly the skies with a “D”-rated pilot? Settle for a “D” restaurant?

The way the Mount Olive school district sees it, its students should not be getting by with D’s on their report cards, either. This fall, there will no longer be any D’s, only A’s, B’s, C’s and F’s.

“D’s are simply not useful in society,” said Larrie Reynolds, the Mount Olive superintendent, who led the campaign against D’s as a way to raise the bar and motivate students to work harder. “It’s a throwaway grade. No one wants to hire a D-anything, so why would we have D-students and give them credit for it?”

The no-D policy, which was adopted by the school board last week, has led to a flurry of Facebook messages from students calling it the worst idea ever, and has been debated on soccer fields and around swimming pools in this suburban township in northwestern New Jersey. Even some teachers have expressed concerns that it may result in more students failing.

“I really don’t like it,” said Chris Radler, 13, who is entering ninth grade; he said it was unfair and would increase the pressure on students. “If you’re a little bit less than a C, but not quite an F, you’re still going to fail. Some kids aren’t at that level yet. They aren’t able to get that upper grade.”

But parents like Christine Priest, a mother of six, applaud the new policy for reinforcing a message that they have long taught at home: D’s are not good enough. “With my kids, we always told them a D is an F,” she said. “D just wasn’t enough of an effort.”

Under the old system, students could pass with a 65 — 389 of the 1,500 students at Mount Olive High had a “D” on their final report cards in June — but now anything lower than a 70 will be considered failure.

While few high schools have banned D’s outright as Mount Olive has, some have sought to tamp down grade inflation by quietly tightening their standards over the years. Several New Jersey high schools, for instance, have raised the minimum for D’s to 70, which is traditionally the C-minus range, with anything below deemed an F.

Mount Olive, an above-average school in a middle-class community, is developing a support system to help students meet the tougher grading standard. When students receive a failing grade on a test, a paper or a homework assignment in the future, they will have three days to repeat the work for a C, and their parents will be notified by phone or e-mail.

Students who continue to fail will be placed on a “watch list” to receive extra-help classes, as well as tutoring from other students. If they need to make up a failed course, they will be given the option of attending an evening school, known as “Sunset Academy,” that will charge a fee of $150 per class.

The total cost of these support efforts to the district is expected to be less than $10,000, school officials said.

Max Werner, 17, an A-student whose father, Mark, is president of the school board, said he and his friends liked the no-D policy because no one should be satisfied with such a low mark. “People are going to have to try harder,” he said. “It’s not like a nice college is going to see all D’s on a report card and want to accept that student.”

Dr. Reynolds said he used a similar grading policy — “A, B, or do it over” — when teaching college classes in Wichita, Kan., in the late 1990s. About half of his students in those classes had to rewrite their initial papers, he recalled, but eventually nearly everyone was turning in work that merited an A or B. “I have never given less than a B,” he said.

In summer school last week, 79 Mount Olive High students were repeating classes they had failed during the year. Mark Fiedorczyk, the summer school principal, said he expected to see an increase next summer because of the no-D policy.

Still, Mr. Fiedorczyk, who teaches seventh-grade science during the year, said the higher standard was just what some students needed. In June, he handed out D’s to a half-dozen students, all of whom, he said, were capable of C’s if they had tried harder. Instead, they had skipped homework and projects, and showed up unprepared for tests.

“I have kids who walk the borderline,” he said. “They know it. They admit it. They calculate what they need to get the D.”

At which, another teacher joked: “Then they’ll turn around and say they can’t do math.”

For Aphrodite Georgakopoulos, 16, the no-D policy means she will have to work a lot harder to avoid summer school again. She is repeating world history and Algebra 2 after getting lazy about assignments or just giving up in frustration, she said.

“It’s not like I can’t do it; it’s just that I won’t push myself,” she said. “I don’t know why. I need someone to be constantly on top of me, making sure I do everything.”

Down the hallway, Sean Robinson, 17, who is retaking Spanish, said he hoped that students would feel better about themselves in a D-free school, and that Mount Olive’s higher standard would raise its profile in the region.