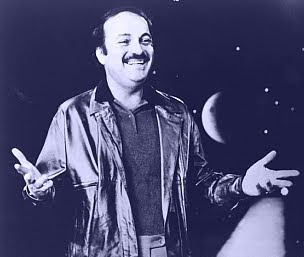 The Miami Herald
On Friday afternoon Jack Horkheimer, veteran astronomer and naked-eye-astronomy enthusiast, died of “a respiratory ailment” at the age of 72.

He was the executive director of the planetarium at the Miami Museum of Science and Space Transit, but was most well known for his weekly PBS series. It’s called Jack Horkheimer: Star Gazer and he started doing it in 1976.

I was first introduced to Mr. Horkheimer’s short weekly show in Astronomy 101, my last year in college, when our professor would cap off every Friday class with it. To a bunch of humanities students just trying to get their Science/Math requirement out of the way, Horkheimer was embarrassingly enthusiastic. His videos wouldn’t take no for an answer; shaming, awing, and assaulting us with the incredible, awesome things that you can experience just by looking at the sky every now and then.

And doing it all from an unbearably ridiculous green screen mock up of him sitting on a planetary ring.

For the same experience, here is his show on what the night sky will hold in the coming week.

We wish you clear skies for your (as Mr. Horkheimer would say) looking up.

Miami's planetarium's longtime director was an enthusiastic showman known for creative programming. He created the five-minute weekly TV program and offered it free to PBS stations across the country.

Horkheimer had battled respiratory problems for many years, according to Tony Lima, a spokesman for the Miami Science Museum and Space Transit Planetarium. Horkheimer directed the planetarium for 35 years until his retirement three years ago.

A flamboyant showman, Horkheimer was not taken seriously by professional astronomers, but his exuberant promotion of naked-eye astronomy — stargazing without a telescope — made him a celebrity among amateurs and gave his five-minute weekly television segments a campy appeal. Sky & Telescope magazine called him one of amateur astronomy's "most iconic" figures in an online tribute.

Foley Arthur Horkheimer was born into a wealthy publishing family in Randolph, Wis., on June 11, 1938. He adopted Jack as a stage name during a brief career as a jazz pianist and organist after high school in the mid-1950s. He studied drama at Purdue University, graduating in 1963. In 1964 he moved to Miami for health reasons and began volunteering at the planetarium.

In 1973 he became its executive director and began developing a reputation nationally for creative programming. One of his first successes was an award-winning multimedia show called "Child of the Universe" that expressed the wonder he experienced when he gazed at the stars.

In 1976, Horkheimer talked Miami's public television station, WPBT Channel 2, into helping him produce a weekly show that would promote naked-eye stargazing. Originally called "Star Hustler," it went national in 1985 and changed its name to "Star Gazer" in the 1990s. Horkheimer offered the show free to PBS stations, about 200 of which carry it.

In 2000 Horkheimer received the prestigious Klumpke-Roberts Award from the Astronomical Society of the Pacific. He was lauded for making astronomy "so attractive that people can't help but be interested in learning about it."

He ended every installment of "Star Gazer" with these words: "Keep looking up."

Horkheimer, who never married, had no immediate survivors.
Posted by Mercury at 10:57 AM