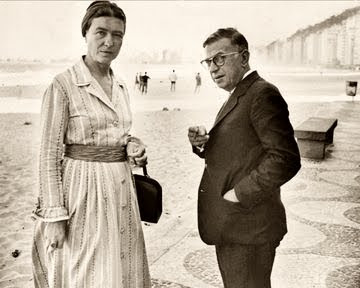 Jean-Paul Sartre and Simone de Beauvoir in Brasil in 1960.
Ghosts from the past: Phenomenology, Sartre, Camus. Is the author suggesting an association between "thinking" and "ugliness"? Some "tongue in cheek" thoughts.

"The Phenomenology of Ugly"

The New York Times
This all started the day Luigi gave me a haircut. I was starting to look like a mad professor: specifically like Doc in “Back to the Future.” So Luigi took his scissors out and tried to fix me up. Except — and this is the point that occurred to me as I inspected the hair in the bathroom mirror the next morning — he didn’t really take quite enough off. He had enhanced the style, true, but there was a big floppy fringe that was starting to annoy me. And it was hot out. So I opened up the clipper attachment on the razor and hacked away at it for a while. When I finally emerged there was a general consensus that I looked like a particularly disreputable scarecrow. In the end I went to another barbershop (I didn’t dare show Luigi my handiwork) and had it all sheared off. Now I look like a cross between Britney Spears and Michel Foucault.

In short, it was a typical bad hair day. Everyone has them. I am going to hold back on my follicular study of the whole of Western philosophy (Nietzsche’s will-to-power-eternal-recurrence mustache; the workers-of-the-world-unite Marxian beard), but I think it has to be said that a haircut can have significant philosophical consequences. Jean-Paul Sartre, the French existentialist thinker, had a particularly traumatic tonsorial experience when he was only seven. Up to that point he had had a glittering career as a crowd-pleaser. Everybody referred to young “Poulou” as “the angel.” His mother had carefully cultivated a luxuriant halo of golden locks. Then one fine day his grandfather takes it into his head that Poulou is starting to look like a girl, so he waits till his mother has gone out, then tells the boy they are going out for a special treat. Which turns out to be the barbershop. Poulou can hardly wait to show off his new look to his mother. But when she walks through the door, she takes one look at him before running up the stairs and flinging herself on the bed, sobbing hysterically. Her carefully constructed — one might say carefully combed — universe has just been torn down, like a Hollywood set being broken and reassembled for some quite different movie, rather harsher, darker, less romantic and devoid of semi-divine beings. For, as in an inverted fairy-tale, the young Sartre has morphed from an angel into a “toad”. It is now, for the first time, that Sartre realizes that he is — as his American lover, Sally Swing, will say of him — “ugly as sin.”

“The fact of my ugliness” becomes a barely suppressed leitmotif of his writing. He wears it like a badge of honor (Camus, watching Sartre in laborious seduction mode in a Paris bar: “Why are you going to so much trouble?” Sartre: “Have you had a proper look at this mug?”). The novelist Michel Houellebecq says somewhere that, when he met Sartre, he thought he was “practically disabled.” It is fair comment. He certainly has strabismus (with his distinctive lazy eye, so he appears to be looking in two directions at once), various parts of his body are dysfunctional and he considers his ugliness to count as a kind of disability. I can’t help wondering if ugliness is not indispensable to philosophy. Sartre seems to be suggesting that thinking — serious, sustained questioning — arises out of, or perhaps with, a consciousness of one’s own ugliness.

I don’t want to make any harsh personal remarks here but it is clear that a philosophers’ Mr. or Ms. Universe contest would be roughly on a par with the philosophers’ football match imagined by Monty Python. That is to say, it would have an ironic relationship to beauty. Philosophy as a satire on beauty.

It is no coincidence that one of our founding philosophers, Socrates, makes a big deal out of his own ugliness. It is the comic side of the great man. Socrates is (a) a thinker who asks profound and awkward questions (b) ugly. In Renaissance neo-Platonism (take, for example, Erasmus and his account of “foolosophers” in “The Praise of Folly”) Socrates, still spectacularly ugly, acquires an explicitly Christian logic: philosophy is there — like Sartre’s angelic curls — to save us from our ugliness (perhaps more moral than physical).

But I can’t help thinking that ugliness infiltrated the original propositions of philosophy in precisely this redemptive way. The implication is there in works like Plato’s “Phaedo.” If we need to die in order to attain the true, the good, and the beautiful (to kalon: neither masculine nor feminine but neutral, like Madame Sartre’s ephemeral angel, gender indeterminate), it must be because truth, goodness, and beauty elude us so comprehensively in life. You think you’re beautiful? Socrates seems to say. Well, think again! The idea of beauty, in this world, is like a mistake. An error of thought. Which should be re-thought.

Perhaps Socrates’s mission is to make the world safe for ugly people. Isn’t everyone a little ugly, one way or the other, at one time or another? Who is truly beautiful, all the time? Only the archetypes can be truly beautiful.

Fast-forwarding to Sartre and my bathroom-mirror crisis, I feel this gives us a relatively fresh way of thinking about neo-existentialism. Sartre (like Aristotle, like Socrates himself at certain odd moments) is trying to get away from the archetypes. From, in particular, a transcendent concept of beauty that continues to haunt — and sometimes cripple — us.

“It doesn’t matter if you are an ugly bastard. As an existentialist you can still score.” Sartre, so far as I know, never actually said it flat out (although he definitely described himself as a “salaud”). And yet it is nevertheless there in almost everything he ever wrote. In trying to be beautiful, we are trying to be like God (the “for-itself-in-itself” as Sartre rebarbatively put it). In other words, to become like a perfect thing, an icon of perfection, and this we can never fully attain. But it is good business for manufacturers of beauty creams, cosmetic surgeons and — yes! — even barbers.

Switching gender for a moment — going in the direction Madame Sartre would have preferred — I suspect that the day Britney Spears shaved her own hair off represented a kind of Sartrean or Socratic argument (rather than, say, a nervous breakdown). She was, in effect, by the use of appearance, shrewdly de-mythifying beauty. The hair lies on the floor, “inexplicably faded” (Sartre), and the conventional notion of femininity likewise. I see Marilyn Monroe and Brigitte Bardot in a similar light: one by dying, the other by remaining alive, were trying to deviate from and deflate their iconic status. The beautiful, to kalon, is not some far-flung transcendent abstraction, in the neo-existentialist view. Beauty is a thing (social facts are things, Durkheim said). Whereas I am no-thing. Which explains why I can never be truly beautiful. Even if it doesn’t stop me wanting to be either. Perhaps this explains why Camus, Sartre’s more dashing sparring partner, jotted down in his notebooks, “Beauty is unbearable and drives us to despair.”

I always laugh when somebody says, “don’t be so judgmental.” Being judgmental is just what we do. Not being judgmental really would be like death. Normative behavior is normal. That original self-conscious, slightly despairing glance in the mirror (together with, “Is this it?” or “Is that all there is?”) is a great enabler because it compels us to seek improvement. The transcendent is right here right now. What we transcend is our selves. And we can (I am quoting Sartre here) transascend or transdescend. The inevitable dissatisfaction with one’s own appearance is the engine not only of philosophy but of civil society at large. Always providing you don’t end up pulling your hair out by the roots.

[Andy Martin is currently completing “What It Feels Like To Be Alive: Sartre and Camus Remix” for Simon and Schuster. He was an 2009-10 fellow at the Cullman Center for Scholars and Writers in New York, and teaches at Cambridge University.]
Posted by Mercury at 6:09 AM