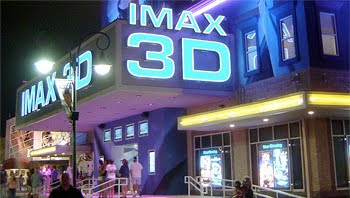 Slate
Another summer weekend, another 3-D blockbuster (Piranha 3-D), and yet one more round of industry speculation: Will newfangled stereographic technology save Hollywood? Or has the 3-D revival run its course?

Just a few months ago, Tim Burton's three-dimensional Alice in Wonderland pulled in $116 million in its opening weekend, and a few months before that, Avatar started its 3-D fueled, $3-billion rampage around the world. New 3-D projects were flushed into the pipeline, and industry executives joyfully asserted that the format brought with it a 20 percent boost in revenue. But in recent weeks, some observers have started wondering whether the 3-D bubble has already burst. Critics may have liked Piranha 3-D well enough, but the new creature feature earned just $10 million in its opening days—putting it in sixth place at the box office, behind flat-screened flicks like The Expendables and Eat Pray Love. Is 3-D dead in the water?

Exhibit A for the curmudgeons is the following chart, showing the opening-weekend revenue from 3-D theaters as a percentage of total revenue for a handful of recent releases:

According to Daniel Frankel of TheWrap.com, who published a version of the graph late last month, "no matter how it's spun, the data on the expected 3-D explosion just isn't going in the right direction." Hollywood isn't ready to give up, he reports, but there's serious concern over the downward slope. As one theater-chain executive told Frankel, "the truth is probably that not everything should be in 3-D."

In the cinema blogosophere, Frankel's numbers went viral. For Patrick Goldstein of the Los Angeles Times, they were evidence that "audiences are abandoning 3-D at an even faster rate than previously suspected. … They've come to realize that, with some exceptions, most Hollywood films simply aren't noticeably better in 3-D." Even big-budget directors are worried that exorbitant ticket prices and lousy products will take their toll: Avatar director James Cameron has warned repeatedly that poorly executed films—what he calls "2.5-D"—could ruin everything.

Maybe so, though you wouldn't know it from the chart shown above. There's no easy way to infer the viability of 3-D from opening weekend returns, but we can at least come up with a smarter approach to the problem. I've presented my own analysis below, based on a more careful parsing of the box-office numbers, and it looks to me that the revival is even worse off than we thought. Not only has the profitability of 3-D fallen in the past few months; it's in a slide that goes back years.

Before we get to that, let's review what makes the first chart so misleading. First of all, the data are incomplete. Fill in the gaps—one film released in April and three more from August—and you get a very different picture:

But don't be fooled into thinking that 3-D is making a comeback-within-a-comeback. As defenders of the industry have already pointed out, the numbers plotted above—3-D revenue as a proportion of total revenue—aren't likely to reflect consumer demand. They have more to do with the number of 3-D theaters that happen to be available at any given time. A movie that gets shown on a few thousand RealD screens is going to make a lot more money (and a higher percentage of its gross) from 3-D than one that gets shown on a few hundred.

Here's an example: Avatar opened last December in 3,450 theaters nationwide; Despicable Me opened this past July at 3,475 theaters. Sounds about the same, except Avatar had a much bigger presence in 3-D venues—some 2,000 of its showings were set up for stereo projection, compared to 1,550 for Despicable Me. (The latter had to compete for screen time with Toy Story 3 and The Last Airbender.) Given that spread, it's no wonder that Avatar got a higher proportion of its revenue from premium showings.

(To put it another way: If half of a movie's screenings were in 2-D, and the other half in 3-D, which half would take in more money—and by how much?)

Let's go back to Avatar and Despicable Me. The former earned, in its opening weekend, $26,800 for every theater that showed the film in 3-D, and $15,800 for each one that screened in 2-D. We might assume that if the film's backers had converted any one of those flat-screen showings to a 3-D projection, they would have realized an additional profit of $11,000—or an extra 70 percent.

What about Despicable Me? That movie took in $16,400 for each 3-D theater in its opening weekend, versus $16,100 for each one that showed it in flat format. If the studio and theater chains had upgraded one 2-D screening of Despicable Me to the fancier format, their added profit would have been just $300—or 2 percent.

It's important to keep in mind that this "switch-one-screen" idea rests on the (shaky) assumption that demand for 2-D and 3-D are more or less interchangeable. In fact, the people who watched a movie on a flat screen may not have been willing to see it on IMAX, and the reverse is also true: It's possible that someone who saw Avatar in 3-D would have skipped the movie altogether if it were only showing flat. Still, the bonus per-screen revenue that a movie gets from 3-D does yield some useful information.

Let's go back to our example: Despicable Me managed to outperform the mighty Avatar at flat screenings, yet Avatar pulled in a lot more money overall. That's because its 3-D revenue boost was so much higher (70 percent versus 2 percent). But if you run the same calculation for other movies, it turns out that Avatar's 70-percent bonus is itself quite low, relatively speaking. In fact, three-dimensional cinema appears to have been in a tailspin ever since it reemerged in 2004.

The trend begins at what I take to be the start of the revival—the November 2004 release of The Polar Express, the first-ever IMAX 3-D feature. That film opened in 3,650 theaters around the country, of which just 59 were equipped to show in 3-D. But the revenue from each of those premium screens was almost $40,000, compared with $6,000 for flat-showings. At the beginning, the 3-D bonus was an incredible 575 percent.

Only a handful of 3-D movies came out over the next few years, but the format already appeared to be losing ground. Beowulf opened at 742 3-D theaters in the fall of 2007 and about 3,150 theaters overall. When you compare the 3-D showings to the ones in 2-D, the added revenue was 135 percent.

Flash-forward two more years, to Christmas 2009, and the undisputed king of 3-D movies, Avatar. As we've seen, the extra revenue from the sci-fi epic's 3-D screenings was 70 percent. When Alice in Wonderland came out three months later, the bonus had dropped to 53 percent. This past May, Shrek Forever After saw a boost of 48 percent. In July, The Last Airbender managed just 24 percent.

Then we come to the weekend of June 18, 2010, when Toy Story 3 opened in more than 4,000 theaters around the country. It was a huge weekend for the Pixar film—one of the biggest of all time, in fact, with more than $110 million in total revenue, and $66 million from 3-D. Yet a close look at the numbers shows something else: On average, Toy Story 3 pulled in $27,000 for every theater showing the movie in 3-D, and $28,000 for every one that showed it flat. In other words, the net effect of showing Woody, Buzz, and friends in full stereo depth was negative 5 percent. The format was losing money.

What explains this downward slide in 3-D? According to one common theory, Hollywood has sabotaged the medium by upgrading flat movies to 3-D in postproduction—a process that yields an inferior product. Critics point to the murky, cardboard-looking Clash of the Titans as the standard-bearer for lousy stereo conversion. But for all the bellyaching, that movie did just fine in its 3-D showings. Relative to flat screens, 3-D showings produced an additional 49 percent in revenue.

The curmudgeons are just as likely to blame the decline of 3-D on outrageous ticket prices. There's always been a premium for IMAX and RealD screenings, but theater chains jacked up the cost of 3-D tickets even more this past March. Some predicted that the money grab would suffocate demand and cut profits. In fact, the price increase seems to have had no effect whatsoever on the gradual deterioration shown on the charts above. There's no sign of a precipitous fall-off.

Here's another explanation for the decline: People are getting bored; the novelty is wearing off. When The Polar Express came out in 2004, and Beowulf in 2007, there was more incentive to see them in 3-D—flat screenings seemed beside the point. But that's no longer the case. Now the decision to see a movie in 3-D is based on a more rational calculation of added costs and potential benefits. I happen to think that Toy Story 3 looked great in three dimensions—well worth the extra dollars. But America may not agree.

In fact, the few movies that still make a significant bonus profit from 3-D screenings are those that have "3-D" in the titles. There have been only three of these in my sample—My Bloody Valentine 3-D, Step Up 3-D, and Piranha 3-D—and their 3-D theaters have benefited from markups of 481 percent, 42 percent, and 131 percent, respectively. That makes perfect sense: Why would anyone bother to see a movie called Piranha 3-D in 2-D? But if these are the only movies that can pull a major added profit from 3-D, that's bad news for Hollywood. The studios don't want the medium to be relegated to genre flicks with limited audiences. They're hoping people won't need the cue of a "3-D" title to shell out for high-priced tickets.

Given all the evidence presented here, I believe that audiences are gradually losing interest in 3-D movies. But there's still the caveat about whether 3-D revenue and 2-D revenue are really interchangeable. It's possible to interpret the declining numbers another way. It may be that interest in 3-D has remained constant while the number of 3-D theaters has increased. In the first few years of the revival, a new movie would be rolled out on a few hundred 3-D screens. Now it gets shown on a few thousand. (The numbers are still going up: By the end of 2010, more than 5,000 3-D screens will be available.) So we may be as excited as ever about things popping off the screen—only now we've got more places where we can spend our 3-D money. In other words, a growth in theater capacity is diluting per-screen profits.

But now we're back where we started. Critics of the first chart—the one showing percent of total gross revenue from 3-D—complained that the decline was merely the effect of having too few 3-D theaters. (Money was being left on the table, they said, because there weren't enough screens to go around.) Now we're trying to explain the decline in per-screen revenue by saying just the opposite—that there are too many 3-D theaters.

Either way, the prognosis for 3-D seems dire: There's either too much supply or not enough demand. For mainstream movies that can be viewed in either format, the added benefit of screening in three dimensions is trending toward zero.


The fad will fizzle...3D is a doomed novility
Posted by Mercury at 4:18 AM