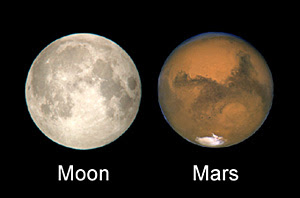 NASA
For the seventh year in a row, the Mars Hoax is infecting email boxes around the world. Passed from one reader to another, the message states that on August 27th Mars will approach Earth and swell to the size of a full Moon. "NO ONE ALIVE TODAY WILL EVER SEE THIS AGAIN," the email declares--always in caps.

News flash: It's not true.

Here are the facts. On August 27, 2010, Mars will be 314 million km from Earth, about as far away as it can get. Mars will shine in the western sky after sunset like a tiny red star of ordinary brightness. If you didn't know it was there, you probably wouldn't notice.

The origins of the Hoax can be traced back to 2003 when Mars really did swell to unusual proportions. On August 27th of that year, Mars came within 56 million km of Earth—the nearest it has been in 60,000 years. People marveled at the orange brilliance of Mars in the night sky and crowded around telescopes for clear views of the planet's towering volcanoes, ruddy plains and glistening polar ice caps. At the height of the display, Mars was about 75 times smaller than the full Moon.

That's when "the virus" was born.

Someone, somewhere, reasoned as follows: If Mars is 75 times smaller than the Moon, then magnifying it 75 times should make it equal to the Moon. Early versions of the Hoax encouraged readers to get out their telescopes and insert a 75x eyepiece: "At a modest 75 times magnification," the message stated, "Mars will look as big as the full Moon to the naked eye."

Soon, the Hoax was vectoring around the internet, making copies of itself and mutating. Advanced versions of the virus, sleeker and less wordy than its ancestors, omitted the magnification and simply stated, "Mars will look as big as the full Moon to the naked eye!" Before long, the year was omitted, too. August 27, 2003, became August 27, and the Hoax became immortal. Indeed, years of stories contradicting the Hoax have failed to stamp it out. This is the fourth vaccination by Science@NASA alone.

Tolerant readers point out that the Mars Hoax is not really a hoax, because it is not an intentional trick. The original composer probably believed everything he or she wrote in the message. If so, even the name of the Mars Hoax is wrong!

Here's what you should do on August 27th. Go outside at sunset and face west. The bright light you see shining through the twilight is lovely Venus. Grab a pair of binoculars and scan the sky around Venus. A few degrees to the right, you'll come across a little orange star-like object. That is Mars.
Posted by Mercury at 4:55 AM