Nicholas of Kues..."ahead of his time in the field of science" 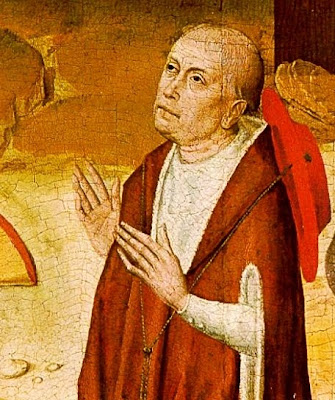 Nicholas of Kues
1401 to August 11th, 1464
Cardinal Nicholas of Cusa was a "German theologian, influential philosopher, mathematician, and scientist. His scientific ideas, shrouded in theological language, were his personal speculations. Before Copernicus by half a century, he suggested that the Earth was a nearly spherical shape, turned on its axis and revolved around the Sun (1440); that each star is itself a distant sun with inhabited worlds in orbit; and that space was infinite. In mathematics, he contributed concepts of the infinitesimal and of relative motion. He made spectacles for nearsighted people using concave lenses, departing from the usual and more easily produced convex shape that worked only for farsighted users. He considered air as a source of some sustenance for plants, and recognized the pulse for diagnosis."

Nicholas is also considered by many to be a genius ahead of his time in the field of science. Nicolaus Copernicus, Galileo Galilei and Giordano Bruno were all aware of the writings of Cusanus as was Johannes Kepler (who called Cusanus 'divinely inspired' in the first paragraph of his first published work). Predating Kepler, Cusanus said that no perfect circle can exist in the universe (opposing the Aristotelean model, and also Copernicus' later assumption of circular orbits), thus opening the possibility for Kepler's model featuring elliptical orbits of the planets around the Sun. He also influenced Giordano Bruno by denying the finiteness of the universe and the Earth's exceptional position in it (being not the center of the universe, and in that regard equal in rank with the other stars). He was not, however, describing a scientifically verifiable theory of the universe: his beliefs (which proved uncannily accurate) were based almost entirely on his own personal numerological calculations and metaphysics.

Cusanus made important contributions to the field of mathematics by developing the concepts of the infinitesimal and of relative motion. He was the first to use concave lenses to correct myopia. His writings were essential for Leibniz's discovery of calculus as well as Cantor's later work on infinity.

From the Catholic Encyclopedia (1913 edition):

The astronomical views of the cardinal are scattered through his philosophical treatises. They evince complete independence of traditional doctrines, though they are based on symbolism of numbers, on combinations of letters, and on abstract speculations rather than observation. The earth is a star like other stars, is not the centre of the universe, is not at rest, nor are its poles fixed. The celestial bodies are not strictly spherical, nor are their orbits circular. The difference between theory and appearance is explained by relative motion. Had Copernicus been aware of these assertions he would probably have been encouraged by them to publish his own monumental work.
Nicholas of Cusa [Wikipedia]

Nicholas of Cusa, a German philosopher of the early Renaissance, died Aug. 11, 1464, at about the age of 63. Also known as Nicolaus Cusanus, or Nikolaus of Kues, Cusa worked in the service of the Catholic Church in Germany, participated in a number of Church councils, and eventually became a Cardinal. But in the history of science, he is known for being one of the first, in this Aristotelian age, to take an interest in the writings of Plato and his followers, such as Proclus, and also to argue for the importance of mathematics in studying nature, accepting the vision of the Pythagoreans. He wrote a book in 1440, called De docta ignorantia (On learned ignorance), in which he argued that since God is infinite, we can never know him directly, but by attempting to understand the infinite mathematically, we can have a better understanding of the nature of the infinite. We can learn, he said, that in an infinite universe, there is no center, or rather, “the center is everywhere, and the circumference nowhere.” So it makes no sense to speak of the earth as a central body, or as an inferior body; the earth, Cusa believed, is as worthy as any other celestial body, and moves like every other body. And this was a full century before Copernicus proposed that the earth is a planet. It is hard to assess the impact of Cusa; he did not influence Copernicus, although he might have inspired Kepler--at least, Kepler mentions him by name in his first book. But Cusa certainly influenced Giordano Bruno, who loved this idea of a noble earth moving in an infinite universe, and made it a cenral part of his own world view. Before Cusa died, he founded a hospital for the aged in his home town of Kues, on the Moselle River, and also installed his library there. The hospital with the Cusa library somehow escaped the devastations of war and still stands, over 500 years later, much as Cusa left it, to the great relief of Cusa scholars. There is a charming view of the library here: http://www.renaissancelibrary.com/StNikolausHospital.htm .
Posted by Mercury at 5:42 AM