Will the real Ansel Adams stand up...and who is Earl Brooks? 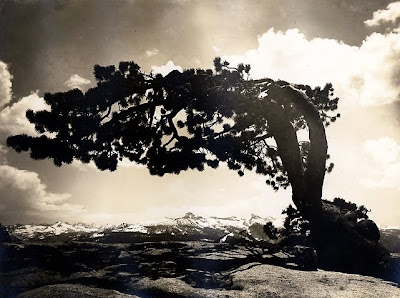 This print of the Jeffrey pine in Yosemite by an unknown photographer, Earl Brooks, resembles an image that has been attributed to Ansel Adams.
"Tale of Ansel Adams Negatives Grows Hazy"

The New York Times
It was a dream come true, straight out of “Antiques Roadshow.” In 2000 Rick Norsigian, a painter in a school maintenance department, bought a box of photo negatives at a garage sale in Fresno, Calif., for $45. Last month, a decade later, he stood in a Beverly Hills art gallery to announce that a team of experts had concluded “beyond a reasonable doubt” that Ansel Adams had taken the pictures.

The gallery’s owner, David W. Streets, appraised the value of the 65 images, which the experts called “the lost negatives,” at $200 million, and the incident made news around the world.

But a fairy-tale ending is eluding Mr. Norsigian. A day after the announcement, Matthew Adams, a grandson of the photographer, disputed the finding, questioned the credentials of the experts and went so far as to call the whole business a “scam.”

A few days after that, an Oakland woman, Marian Walton, announced that she had a photo that was identical to one of the negatives. It had been taken, she said, not by Adams, the famous outdoors photographer, but by an uncle of hers, Earl Brooks.

And now, in the latest complication, court records reveal that Mr. Streets, who set the value for the negatives and is handling the related sales, is a convicted felon with a criminal record for petty theft and fraud in Louisiana and Kentucky. Though he says on his Web site, davidstreetsbeverlyhills.com, that he has 25 years of fine-art appraisal experience, two of Mr. Streets’s former employers say his true talent is in the embellishment of his credentials.

Doris Allen, who owns the Bryant Galleries in New Orleans, says that though Mr. Streets, 45, can be “very charming,” he had said he had no appraisal experience when she hired him at her business in 2000. Now she is amazed to see him occupy an influential role in a national art debate. “How can he get up there and claim that those negatives are worth $200 million?” she said. “That is absurd.”

The discussion of just who took the pictures is far from over, and Mr. Norsigian’s lawyer, Arnold Peter, said Mr. Streets’s past has little bearing on that question. But in a subjective field where credibility and expertise matter, it cannot help Mr. Norsigian that Mr. Streets’s résumé appears to be tarnished.

For his part, Mr. Streets initially denied in an interview that he was the same David W. Streets who was convicted of passing bad checks, fraud and petty theft over a seven-year period that ended in 1998 when he was in his early 30s. But he later sent an e-mail in which he cited his extensive civic involvement in recent years, described the incidents as old, and attributed them to “untreated manic-depression” that he began to experience after his mother “committed suicide when I was 15, and my father died the following year.”

“I took complete responsibility and learned from that experience,” he said.

The art debate has its roots in Mr. Norsigian’s purchase of the box of negatives, a rummage-sale find that took on a new light when he later noticed in an Adams biography that certain features of the plate-glass negatives he bought, which depict California landscape scenes from Carmel, Yosemite and around San Francisco, seemed to match events in in Adams’s life. In particular, the plates showed evidence of fire damage, and in 1937 Adams lost negatives to a darkroom fire.

“The size, the fire damage, the locations and different stuff like that,” Mr. Norsigian said. “I kept researching little pieces at a time.”

He took his discovery to members of the Adams family, who disputed his claims. Adams had been notoriously protective of his negatives, locking them in a bank vault when he lived in San Francisco. Would he misplace a box of negatives?

“Ansel would never have done something like that,” said William Turnage, managing trustee of the Ansel Adams Publishing Rights Trust, which owns the rights to Adams’s name and work.

But in 2007 Mr. Norsigian and Mr. Peter, his lawyer, set about organizing an authentication team that included a former F.B.I. agent, a former United States attorney, two handwriting experts, a meteorologist (to track cloud patterns in the images), a landscape photographer and a former curator of European decorative arts and sculpture for the Museum of Fine Arts, Boston.

They concluded, without question, that the prints were of the sort made by Adams as a young photographer in the 1920s.

Mr. Peter said he decided to market the materials through Mr. Streets, whom he did not know but whose work as a dealer he was aware of. Mr. Streets, who moved to California from New Orleans in 2005, bills himself as “Los Angeles’s leading appraiser of all genres of fine art and celebrity memorabilia.”

Among clients listed on his Web site are three former presidents, including Bill Clinton, and numerous celebrities. It features photos of him with Hollywood stars and with Maria Shriver, the wife of Gov. Arnold Schwarzenegger of California. A spokesman for Mr. Clinton said he did not recognize the dealer’s name.

Mr. Peter said it was Mr. Streets who came up with the $200 million figure the night before their July 27 news conference. “The $200 million represents several sources of revenue over an extended period of time — reprints, licensing, eventual sale of the negatives,” Mr. Peter said.

But even a member of Mr. Norsigian’s authentication team has expressed doubts about the estimate. Patrick Alt, a photographer, said that he believed that Adams did create the negatives but that he found Mr. Streets’s appraisal estimate “outrageous.”

It certainly will be difficult to support that value if the photos were taken by Mr. Brooks, Ms. Walton’s uncle, now deceased, who dabbled in photography. Ms. Walton, 87, said, “I about fell off my sofa” when she saw Mr. Norsigian’s announcement on television. The image on the screen looked exactly like a photo by her uncle that she had hung on her bathroom wall: a picture of the leaning Jeffrey pine in Yosemite that she had inherited from her father in 1981.

Two former Adams assistants, John Sexton and Alan Ross, have since agreed with her, saying tell-tale shadows and dust spots indicated that the two Yosemite pictures, Mr. Norsigian’s and Ms. Walton’s, were taken at the same time with the same camera.

Nothing about that development has dissuaded the Norsigian team from moving forward with sales, staged out of Mr. Streets’s gallery.

Mr. Streets has become something of a fixture in some Beverly Hills circles. Last May the mayor there, Jimmy Delshad, read a proclamation at a party Mr. Streets held on the anniversary of his gallery’s opening. But the mayor’s office later said he did not declare it “David W. Streets Day,” as it says on Mr. Streets’s Web site.

Mr. Streets held a similarly high profile in New Orleans, even after his criminal convictions, for which he received probation and was, in one case, required to pay $19,000 restitution. As director of the Bryant Galleries branch there, he was a guest speaker at an art luncheon and regularly appeared in the society column.

Ms. Allen of Bryant Galleries said she did not know when she hired him that he had a criminal record, including a charge for pocketing a $600 deposit that a woman had made toward a couch at a furniture store where he had worked.

Ms. Allen, though, said she and her husband had a dispute with Mr. Streets and demoted him in 2004, after which he left and ended up working at at least one other gallery in New Orleans. She characterized his director’s position as primarily a sales job.

After Hurricane Katrina in 2005, Mr. Streets moved to Los Angeles, where he has made his share of celebrity friends.

“I’ve known him for years,” said Bryan Batt, an actor who plays Salvatore on “Mad Men.” He described him as “a kind and generous man” who gave a party for Mr. Batt when his memoir was released last spring.

The continuing dispute has not shut down the sale of prints, which Mr. Norsigian has priced from $1,500 to $7,500; posters are going for $45. Mr. Peter declined to say how many have been sold or what percentage Mr. Streets is receiving as the dealer.

Copyright claims may well be brought by the Ansel Adams Publishing Rights Trust.

A solid outcome from the haze of the dispute has been the discovery of a new photographic star. This November a San Francisco gallery owner, Scott Nichols, will be hosting a show of work by Adams and his assistants and he has decided to include photos by Mr. Brooks too.

“Uncle Earl is a damned good photographer,” Mr. Nichols said, “There’s no doubt about it.”

For other posts on Ansel Adams, use the blog's search engine.
Posted by Mercury at 6:50 AM