Invocation of Plato to some modern issues 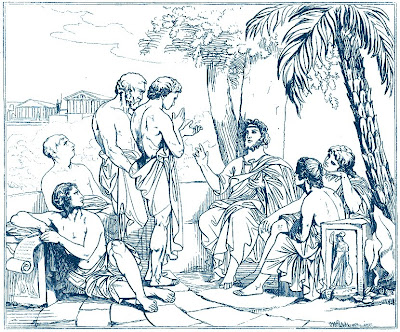 "Plato’s Pop Culture Problem, and Ours"

The New York Times
This fall, the U.S. Supreme Court will rule on a case that may have the unusual result of establishing a philosophical link between Arnold Schwarzenegger and Plato.

The case in question is the 2008 decision of the Ninth Circuit Court of Appeals striking down a California law signed by Gov. Schwarzenegger in 2005, that imposed fines on stores that sell video games featuring “sexual and heinous violence” to minors. The issue is an old one: one side argues that video games shouldn’t receive First Amendment protection since exposure to violence in the media is likely to cause increased aggression or violence in real life. The other side counters that the evidence shows nothing more than a correlation between the games and actual violence. In their book “Grand Theft Childhood,” the authors Lawrence Kutner and Cheryl K. Olson of Harvard Medical School argue that this causal claim is only the result of “bad or irrelevant research, muddleheaded thinking and unfounded, simplistic news reports,.”

The issue, which at first glance seems so contemporary, actually predates the pixel by more than two millennia. In fact, an earlier version of the dispute may be found in “The Republic,” in which Plato shockingly excludes Homer and the great tragic dramatists from the ideal society he describes in that work.

Could Plato, who wrote in the 4th century B.C., possibly have anything to say about today’s electronic media? As it turns out, yes, It is characteristic of philosophy that even its most abstruse and apparently irrelevant ideas, suitably interpreted, can sometimes acquire an unexpected immediacy. And while philosophy doesn’t always provide clear answers to our questions, it often reveals what exactly it is that we are asking.

Children in ancient Athens learned both grammar and citizenship from Homer and the tragic poets. Plato follows suit but submits their works to the sort of ruthless censorship that would surely raise the hackles of modern supporters of free speech. But would we have reason to complain? We, too, censor our children’s educational materials as surely, and on the same grounds, as Plato did. Like him, many of us believe that emulation becomes “habit and second nature,” that bad heroes (we call them “role models” today) produce bad people. We even fill our children’s books with our own clean versions of the same Greek stories that upset him, along with our bowdlerized versions of Shakespeare and the Bible.

What is really disturbing is that Plato’s adult citizens are exposed to poetry even less than their children. Plato knows how captivating and so how influential poetry can be but, unlike us today, he considers its influence catastrophic. To begin with, he accuses it of conflating the authentic and the fake. Its heroes appear genuinely admirable, and so worth emulating, although they are at best flawed and at worst vicious. In addition, characters of that sort are necessary because drama requires conflict - good characters are hardly as engaging as bad ones. Poetry’s subjects are therefore inevitably vulgar and repulsive - sex and violence. Finally, worst of all, by allowing us to enjoy depravity in our imagination, poetry condemns us to a depraved life.

This very same reasoning is at the heart of today’s denunciations of mass media. Scratch the surface of any attack on the popular arts - the early Christians against the Roman circus, the Puritans against Shakespeare, Coleridge against the novel, the various assaults on photography, film, jazz, television, pop music, the Internet, or video games - and you will find Plato’s criticisms of poetry. For the fact is that the works of both Homer and Aeschylus, whatever else they were in classical Athens, were, first and foremost, popular entertainment.

Tens of thousands of people of all classes attended the free dramatic festivals and Homeric recitations of ancient Athens. Noisy and rambunctious, they cheered the actors they liked and chased those they didn’t off the stage, often pelting them with the food it was customary to bring into the theater. Drama, moreover, seemed to them inherently realistic: it is said that women miscarried when the avenging Furies rushed onstage in Aeschylus’s “Eumenides.”

To be realistic is to seem to present the world without artifice or convention, without mediation - reality pure and simple. And popular entertainment, as long as it remains popular, always seems realistic: television cops always wear seat belts. Only with the passage of time does artifice become visible - George Raft’s 1930’s gangsters appear dated to audiences that grew up with Robert De Niro. But by then, what used to be entertainment is on its way to becoming art.

In 1935, Rudolf Arnheim called television “a mere instrument of transmission, which does not offer any new means for the artistic representation of reality.” He was repeating, unawares, Plato’s ancient charge that, without a “craft” or an art of his own, Homer merely reproduces “imitations,” “images,” or “appearances” of virtue and, worse, images of vice masquerading as virtue. Both Plato and Arnheim ignored the medium of representation, which interposes itself between the viewer and what is represented. And so, in Achilles’ lament for Patroclus’ death, Plato sees not a fictional character acting according to epic convention but a real man behaving shamefully. And since Homer presents Achilles as a hero whose actions are commendable, he seduces his audience into enjoying a distorted and dismal representation that both reflects and contributes to a distorted and dismal life.

We will never know how the ancient Athenians reacted to poetry. But what about us? Do we, as Plato thought, move immediately from representation to reality? If we do, we should be really worried about the effects of television or video games. Or are we aware that many features of each medium belong to its conventions and do not represent real life?

To answer these questions, we can no longer investigate only the length of our exposure to the mass media; we must focus on its quality: are we passive consumers or active participants? Do we realize that our reaction to representations need not determine our behavior in life? If so, the influence of the mass media will turn out to be considerably less harmful than many suppose. If not, instead of limiting access to or reforming the content of the mass media, we should ensure that we, and especially our children, learn to interact intelligently and sensibly with them. Here, again, philosophy, which questions the relation between representation and life, will have something to say.

Even if that is true, however, though, to compare the “Iliad” or “Oedipus Rex” to “Grand Theft Auto,”, “CSI: NY,” or even “The Wire” may seem silly, if not absurd. Plato, someone could argue, missed something serious about great art, but there is nothing to miss in today’s mass media. Yet the fact is that Homer’s epics and, in particular, the 31 tragedies that have survived intact (a tiny proportion of the tens of thousands of works produced by thousands of ancient dramatists) did so because they were copied much more often than others - and that, as anyone familiar with best-selling books knows, may have little to do with perceived literary quality. For better or worse, the popular entertainment of one era often becomes the fine art of another. And to the extent that we still admire Odysseus, Oedipus, or Medea, Plato, for one, would have found our world completely degenerate - as degenerate, in fact, as we would find a world that, perhaps two thousand years from now, had replaced them with Tony Soprano, Nurse Jackie, or the Terminator.

And so, as often in philosophy, we end with a dilemma: If Plato was wrong about epic and tragedy, might we be wrong about television and video games? If, on the other hand, we are right, might Plato have been right about Homer and Euripides?

[Alexander Nehamas is professor of philosophy and comparative literature and Edmund N. Carpenter, II, Class of 1943 Professor in the Humanities at Princeton University. He is the author of several works on Plato, Nietzsche, literary theory and aesthetics, including, most recently, “Only A Promise of Happiness: The Place of Beauty in a World of Art.”]
Posted by Mercury at 9:04 AM