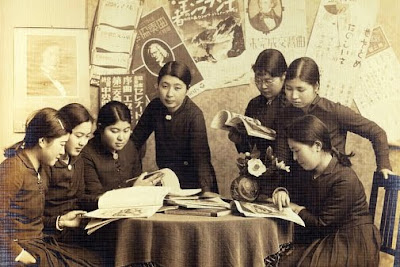 E-Books could have a serious global impact on romantic encounters.

"Judging a Girl by Her Cover"

Why I'll miss a world where books make the first move.

Slate
Last week's news that Amazon is now selling more e-books than hardcovers surely delighted gadget lovers (while saddening booksellers). But as tech news, this was hardly news. Like portable MP3 players and laptops, the Kindle is yet another step away from from old media like vinyl and paper. This matters to collectors and nostalgic types (of which I am one), but the really important issues raised by the new technology, the ones all of us face, are social and romantic. Simply put, our gadgets give us too much privacy.

Remember when you could tell a lot about a guy by what cassette tapes—Journey or the Smiths?—littered the floor of his used station wagon? No more, because now the music of our lives is stored on MP3 players and iPhones. Our important papers live on hard drives or in the computing cloud, and DVDs are becoming obsolete, as we stream movies on demand. One by one, the meaningful artifacts that we used to scatter about our apartments and cars, disclosing our habits to any visitor, are vanishing from sight.

Nowhere is this problem more apparent, and more serious, than in the imperilment of the Public Book—the book that people identify us by because they can glimpse it on our bookshelves, or on a coffee table, or in our hands. As the Kindle and Nook march on, people's reading choices will increasingly be hidden from view. We'll go into people's houses or squeeze next to them on the subway, and we'll no longer be able to know them, or judge them, or love them, or reject them, based on the books they carry.

This is a delicate matter. I can already hear some readers turning the page (perhaps a Kindle "page"), muttering that only an elitist jerk picks friends or lovers based on what they can be seen reading. Well, maybe. This essay is for the rest of you, the ones who freely admit to having been seduced by a serendipitous volume of Jamaica Kincaid's Annie John glimpsed on a potential girlfriend's living-room shelf or by a spine-broken copy of Robert Lowell sitting atop that boy's nightstand. Maybe that was your first time in the apartment, you had been reluctant to go, and now you wanted to linger a while …

If all they'd had were e-book readers plugged into a convenient socket, what would you have done then—asked to have a look? That feels like a fifth-date move, at the earliest—and it was always talking about books that got you the first date! That was my experience, anyway.

When I was 22 there was the dazzling brunette who, weeks into the relationship, when I asked why she had agreed to a date, said, "I liked your books." In that first studio apartment, I had deposited a box of college reading I had never gotten to: my Oxford Study Bible, a book about Second Temple Judaism, and Awash in a Sea of Faith, a history of American religion. At a small party I threw, to which I had invited the few people I knew in town, she—dragged there by a friend—had been intrigued by these books sitting on that bookshelf. (Ikea, of course.)

When I was 26 there was the English teacher at the summer school where I was teaching who noticed my copy of Best American Essays 1996. Her face broke wide open, into a big, eager smile, and she said, "The page from Anna Karenina!" I knew exactly what she was talking about: a passage in Ian Frazier's essay "Take the F," one of the included essays, where he spots a torn page while walking along Carroll Street in Brooklyn, bends over, and discovers that it's page 191 of Anna Karenina. The next day, she slipped a copy of a different Ian Frazier essay into my faculty mailbox, and then books were exchanged, and so forth …

And then came my bride. Early gifts from her: a paperback of The Lion, the Witch and the Wardrobe, which she couldn't believe I hadn't read, and Love That Dog, by Sharon Creech. Oddly, I gave her Our Guys, by Bernard Lefkowitz, about the high-school gang rape in Glen Ridge, N.J. I'm not sure what I was thinking.

So what will you do, Kindle generation, when you cannot tell which of the quiet boys holding the e-reader on the subway is engrossed by the latest, predictable legal thriller, and which one by a cheery, long-forgotten Laurie Colwin novel? If by some chance you do end up with the right one, what do you buy him a month later, when it is time for that first, tentative, not-too-expensive present—a gift certificate for a free download?

As a sign of civilizational decline, this is a minor matter. After all, love will always find its way. Even books, like romance, will live on. They will continue to be exchanged, and in fact their quaintness will only increase their value. When they are truly rare, to give one as a gift will imply the batted eyelashes. Books will, in short, suffer the fate that has already befallen letters sent by mail: preciousness.

Worse, they will no longer be that perfect lending object: inexpensive, plentiful, deeply felt. We'll look back fondly on a time when we had hundreds of these things, any one of which could, if she admired it, be stuffed in her backpack as she left. Or, if you weren't so generous, she could surreptitiously "borrow" it, then have an excuse to return it. Maybe she would give it back, maybe she wouldn't. Maybe she would find it a year later and have to hide it from another, newer arrival in her life. Maybe it would find its way back to you, left on your doorstep under cover of night, standing in for all the conversations that you and she were too cowardly to have.
Posted by Mercury at 5:28 AM

Nice blog - believe it or not there is a certain romance to e-books. Maybe it is finding that special book ('Le Grand Meaulnes'??) amongst the plethora of content available on the web.

'About Time' is such a romantic novel.