He walked the Amzon in two and one half years 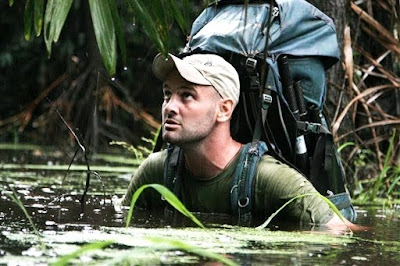 Incredible. Well, this will go into the record books. Makes one wonder why such feats are attempted.

Associated Press
He fought tropical disease and deadly snakes, was held captive at one point and collapsed just short of his goal.

Still, Ed Stafford ended his 2 1/2-year journey Monday as he planned - leaping into the sea as the first man known to walk the length of the Amazon River.

"I've been told I was going to be killed so many times," the 34-year-old former British army captain told The Associated Press. "But I'm not dead. I'm here now and ... I've proved that if you want something enough, you can do anything!"

Stafford had collapsed at the side of the road early Sunday, just 53 miles (85 kilometers) short of his destination. He was back on his feet after a few hours of rest, however, and looked like he had all the energy in the world as he ran into the Atlantic Ocean at Crispim beach Monday morning in northern Brazil - popping champagne and spraying Peruvian forestry worker Gadiel "Cho" Sanchez Rivera, his expedition partner.

It was not the quest of an eco-warrior, Stafford is quick to point out, though he hopes the feat will raise awareness of the Amazon and the complex forces that are leading to its destruction.

Rather, it was the personal challenge for a man who left the military to be a stockbroker, was bored by finance and ended up leading student expeditions in Belize, then supervising the building of a BBC base camp in Guyana.

"The crux of it is, if this wasn't a selfish, boy's-own adventure, I don't think it would have worked," he said before completing his quest. "I am simply doing it because no one has done it before."

There are at least six known expeditions along the course of the Amazon river, from its source high in the Peruvian Andes across Colombia and into Brazil before its waters are dumped into the ocean 4,200 miles (6,760 kilometers) away. But those used boats to advance their travel.

Stafford and a British friend began the walk on April 2, 2008, on the southern coast of Peru. Within three months, his pal left. Stafford carried on, walking bits of the route with hundreds of locals he met along the way. Sanchez Rivera, 31, joined him a few months into the walk - which cost $100,000 and is paid for by sponsoring companies and donations - and completed it with him.

Stafford saw vast swaths of demolished jungle on the journey, deepening his understanding of the Amazon, its role in protecting the globe against climate change and the complex forces behind its destruction.

"It's the people in power who are benefiting from the extraction of the natural resources here," Stafford said. "That's why there are corrupt politicians and laws that aren't enforced and loads of unconstrained deforestation still going on."

He lived off piranha fish he caught, rice and beans, and store-bought provisions found in local communities along the river.

To relax at night, he downloaded podcasts by British comedian Ricky Gervais and episodes of the TV show "The Office" via Internet satellite phone.

After they were welcomed in one Indian community in September 2008, the leaders offered to radio ahead to the next village for permission for Stafford and Sanchez Rivera to walk through their territory.

"The response came back crystal clear: If a gringo walks into their community they will kill him," Stafford wrote on his blog at that time.

He decided on an alternate route, but still found himself in the territory of Indians who remain distrustful of outsiders after suffering extreme violence under Peru's Shining Path terrorist movement.

They grabbed him and Sanchez Rivera and presented them to village leaders.

After being dressed down and having their possessions thoroughly picked over - only a machete was confiscated - the pair's repeated explanations of the purpose of their expedition won over the Indians.

They were allowed to walk on the land, but only if they hired guides from the tribe.

Stafford said he ended the walk with some optimism.

"I think the average Brazilian is a lot more environmentally conscious than the people in power," he said. "I think when the next wave of Brazilian politicians come through - fingers crossed - they will be more conscientious."

His feat earned the praise of no less an adventurer than Sir Ranulph Fiennes, a fellow Briton whom the Guinness Book of World Records describes as the "world's greatest living explorer."

"To do all this in more than 800 continuous days with just a backpack puts Stafford's endeavor in the top league of expeditions past and present," Fiennes wrote on Stafford's website.

Stafford plans another expedition in September 2011 - something nobody has ever done - but will not provide details for fear someone might beat him to it.

Until then, a good, long rest awaits.

"This expedition has been our lives. For 2 1/2 years we've done nothing but walk and walk and walk. To wake up the morning after and know that we've done it will be a big change," he said. "I think we'll get used to it though."
Posted by Mercury at 8:04 PM