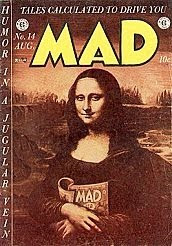 Discovery News
Hidden behind the Mona Lisa's enigmatic smile are dozens and dozens of layers of ultra-thin glaze, according to French researchers who examined the masterpiece through non-invasive X-ray fluorescence spectroscopy.

The investigation revealed that up to 40 layers of transparent glaze, possibly smeared on with the master's fingers, produced the unique effect which is behind the lady's mysterious smile.

Known as "sfumato" from the Italian word "fumo" (meaning smoke), the technique created subtle optical effects that blur outlines and blend shadows as with fog.

Although the sfumato is known as one of the four painting modes of the Renaissance (the other three are unione, chiaroscuro and cangiante), not much was known on how the gradation was achieved.

Indeed, the Renaissance genius never explained how he was able to blend shadow and light in such an imperceptible way. The only reference to the sfumato technique appears in his notes on painting.

“Light and shade should blend without lines or borders, in the manner of smoke," Leonardo wrote.

Apart from the Mona Lisa, these collection also included the Belle Ferronnière, Virgin of the Rocks, Saint John the Baptist, Annunciation, Bacchus, and the Virgin and the Child with Saint Anne.

“A strong diversity in his technique could clearly be seen with this method,” the researchers wrote in the journal Angewandte Chemie.

The researchers, who concentrated on the faces because they feature the characteristics of the sfumato, were able to analyze cross-sections of the glaze layers as well as the composition and thickness of the individual pigment layers.

Each layer of glaze in the Mona Lisa was between 1 to 2 micrometers thick -- about 50 times thinner than a human hair. Layer over layer, the total thickness was of no more than 30 to 40 micrometres. The darker areas in the painting arose because a manganese-containing layer was applied more thickly than in the lighter areas, said the researchers.

According to the analysis, the Mona Lisa’s elusive smile was generated by the glaze blending with subtlety different pigments. This would produce the slight blurring of the shadows around the mouth, creating a mysterious glow.

X-rays on the other paintings, which span over 40 years of Leonardo’s work, revealed that the master long experimented with the technique.

In an earlier painting, the Belle Ferronnière, the shade effects are not the result of a glaze shining through, but are produced with the classic procedure of dark pigments in oil technique.

“The master continuously improved his painting technique. In his later paintings he was then able to produce translucent layers made of films of an organic medium ranging from 30 to only a few micrometers in thickness -- an amazing achievement even by today's standards,” Walter said in a statement.

The sfumato technique required a long time for each layer of glaze to dry, which lasted weeks and months.

This would explain why Leonardo worked on the painting for over four years. Possibly the world's most famous painting, the Mona Lisa was completed toward the end of the life of Leonardo, who lived from 1452 to 1519.

Attempts to solve the enigma around her smile, described by the 16th century artist and writer Giorgio Vasari as "more divine than human," have included theories that the noblewoman was happily pregnant, suffering from asthma, had facial paralysis or that the smile was the result of a compulsive gnashing of teeth.