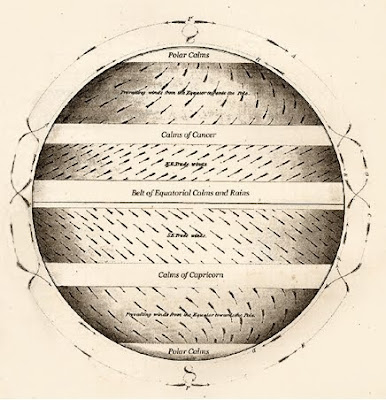 The Meteorological Society ... has been formed not for a city, nor for a kingdom, but for the world. It wishes to be the central point, the moving power, of a vast machine. ... It desires to have at its command, at stated periods, perfect systems of methodical and simultaneous observations; it wishes its influence and its power to be omnipresent over the globe ... to know, at any given instant, the state of the atmosphere on every point on its surface.
Today, Ruskin's "vast machine" is largely complete, built from parts--satellites, instantaneous telecommunications, and computers--that Ruskin could never have imagined. Data from a network of sensors on land, at sea, in the atmosphere, and in outer space are assimilated by computers in real time and redistributed to national weather services across the planet.

The chief purpose of this Global Observing System is weather forecasting, but the data have another important use: the detection of global climate change by comparing data gathered decades ago with recent data. Hence, the reliability of knowledge about climate change depends on the commensurability of data in space and time.

How do we compare thermometer readings from Chicago in 2003 with readings from Moscow in 1867? This is a thorny problem, because meteorological data networks have been continuously in flux. Some changes, such as increasing the number of surface weather stations, have been merely quantitative. But others--especially upper-air observations at altitudes above ~500 m (since the early 20th century) and new instruments such as radar, radiosondes, and satellite-mounted sounders--have altered the network's properties fundamentally.

Maintaining consistency in this huge, constantly changing network is the work of standards. Standards are socially constructed tools: They embody the outcomes of negotiations that are simultaneously technical, social, and political in character. Like algorithms, they serve to specify exactly how something will be done. Ideally, standardized processes and devices always work in the same way, no matter where, what, or who applies them. Consequently, some elements of standards can be embedded in machines or systems. When they work, standards lubricate the construction of technological systems and make possible widely shared knowledge.

In practice, few standards can be specified as perfect algorithms. Therefore, most standards also involve discipline on the part of human participants, who are notoriously apt to misunderstand and resist. As a result, maintaining adherence to a standard involves ongoing adjustments to people, practices, and machines. Although tedious and obscure, negotiations over standards are among the most complex and important political arenas of modern societies, with myriad institutional, financial, symbolic, and practical dimensions.

Behind the emerging consensus on climate change lie more than 150 years of slow, painful negotiations over global standards for measuring, recording, and communicating about the weather. The first successful international standard-setting dates to 1853, when the navies of 9 European nations and the United States agreed to a standard logbook format and standard set of observer instructions (2). By 1858, the Brussels Convention gained another ten signatories. Its tireless promoter, Matthew Maury, was also among the first meteorologists to diagram the global circulation. Many participating nations ignored the Brussels standards, which required (among other things) that vessels using the Fahrenheit scale also record temperatures in Celsius (3). Nonetheless, the logs remain the oldest continuous, quasi-global meteorological record.

In 1873, the First International Meteorological Congress convened in Vienna with representatives of 20 nations. Several delegates pleaded passionately for a genuinely global observing network. C. Buys Ballot, director of the Royal Netherlands Meteorological Institute, proposed "an international fund for the establishment of meteorological observatories on islands and at distant points on the earth's surface" (2).

But the ambitions of the meteorologists far exceeded their governments' willingness to pay for such stations. The Congress focused mostly on standards for international data networks (including instrument calibration, observing hours, measuring scales, and units) and standard formats for the telegraphic exchange of weather data (2). Most scientists preferred the metric system, but representatives from the United States and Great Britain objected. The issue of standard observing hours also proved highly contentious. Negotiation of standards remained the primary concern of the International Meteorological Organization (IMO), founded in 1879, for the next 75 years. The organization avoided conflicts by issuing resolutions and recommendations that national weather services could, and often did, ignore.

In 1883, meteorologists, in alliance with railroad companies and other powerful players, led a successful movement to adopt standard time zones. Ten years before, Cleveland Abbe, first head of the U.S. Army Signal Service weather department, had tried to correlate observer reports of an aurora borealis event with supposedly simultaneous weather measurements. Because auroral events are brief, the lack of a time standard frustrated his efforts (4):

The errors of the Observers' clocks and watches and even of the standards of time used by them, are generally unstated, so that the uncertainty of this vitally important matter will be found to throw obscurity upon some interesting features.
In addition to Washington mean time, observers might use railroad time, local solar time, or local civil time, which varied by longitude, company, and municipality, respectively. Abbe adopted world standard time as a scientific cause célèbre.

Standard time mattered because synoptic weather maps, the 19th century's chief forecasting tool, were supposed to be snapshots of weather over large areas at a given moment. Because predictive skill was poor, temporal precision hardly affected the quality of early forecasts. But as forecast accuracy increased, standard, precise observing times became increasingly important. In the 1960s, climatologists began to digitize vast collections of synoptic maps to get gridded historical data for computer models. Imprecision in the maps, caused in part by murky standards, now affected the historical data series. Vast efforts have since gone into cleaning up these data by closely examining the original observations down to the level of individual records (where they exist).

In 1905, proposals for a telegraph-based "Réseau Mondial" marked the first attempt at a global real-time weather network. But neither the telegraph infrastructure nor the available funds could support this grand vision. IMO planners reduced it to a global climatological database of monthly and annual averages from 500 stations on land. Even this modest project proved extremely difficult in practice. Most data arrived by mail, sometimes taking many months. Faced with nonstandard observing and recording techniques, the network organizer, Sir Napier Shaw, was forced to correspond repeatedly with remote observers to persuade them to conform. As a result, publication of annual data from the Réseau was delayed by up to 13 years, and ceased with the volume for 1932.

Intergovernmental status brought a new kind of politics to meteorology. Scientific internationalism served as a counterweight to the Cold War, but also sometimes provided an ideological cover for less benign initiatives; for example, early weather satellites were used to establish overflight rights for military spy satellites. National governments recognized that internationalism threatened their sovereignty. To secure the widest possible membership, the WMO Convention avoided any claim to absolute authority. Rather than dictate to its member states, it would promote, encourage, and facilitate. Members were required to "do their utmost" to implement WMO standards, but could refuse to adopt any WMO recommendation.

Such deviations instantly became commonplace. For example, the USSR and some other countries elected to continue their standard two-hourly observing times, despite a majority view that a three-hourly system would be sufficient. Here, as in many other cases, global standards were blocked by both perceived national interests and the sheer inertia of existing practices.

In fixing old problems, WMO standards sometimes created new ones. For example, every weather station in the world was assigned a five-digit WMO station identifier. Occasionally a nation would renumber its stations. As a result, a new station might now have the same number as an old one. To avoid such problems, the United States and Canada adopted the separate WBAN (Joint Weather Bureau, Air Force, and Navy) numbering scheme, under which station identifiers can never be reassigned.

Yet even these changes have not eliminated the importance of disciplined human beings for the successful implementation of standards. For example, in the late 1980s, the U.S. Weather Service replaced liquid-in-glass thermometers with digital electronic ones at thousands of stations in its Cooperative Station Network. The new thermometers displayed Fahrenheit in units of 0.1º. Observers were meant to round off the readings to the nearest degree, but about 10% of observers simply entered the entire figure. Many who did round off probably did so incorrectly (6). Furthermore, the new, more accurate instruments did not correlate exactly with the old ones. Network-wide, the new instrumentation altered the mean daily temperature range by -0.7ºC and the average daily temperature by -0.1ºC compared with the previous system (7).

This example illustrates the complex combination of social and technical problems that affect the implementation of standards. The consequences for the detection of climatic change can be profound: The biases discovered in the U.S. Cooperative Station Network, although correctable, "are of the same magnitude as the changes of global and United States mean temperatures since the turn of the 20th century" (6).

Despite global standards, Ruskin's "vast machine" remains incomplete. Since the 1980s, climate politics have provoked much controversy over the quality of data, sometimes resurrecting debates that standards were intended to settle. In the long run, this heightened scrutiny makes for better science. In the short run, it demonstrates the irreducible social and political dimensions of all technological systems.